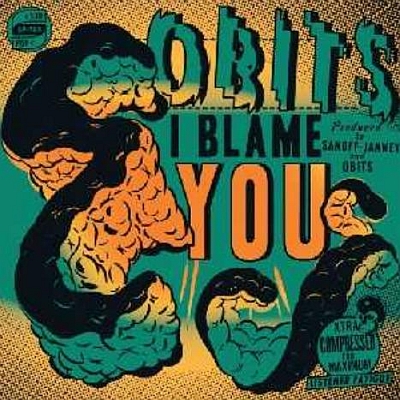 Rick Froberg has one hell of a trail of strident ghosts following after him – the tight wail of Drive Like Jehu, the bulldog thrust of Hot Snakes – and it’s near impossible to ignore their harsh clatter when listening to Obits. It’s unfair, but there you are; the spectres will not be stilled. With that in mind, Obits is a good record, but probably not that good.

The first three tracks on I Blame You are tight, balled and dirty. The noose-tight rhythm section of Scott Gursky and Greg Simpson, and simple, wiry riffs from Froberg and Sohrab Habibion drive all three. This is a straight from the garage sound – think The Sonics, The Animals; and yet there is an unhinged psychobilly edge to things. ‘Pine On’ especially feels on the edge of a bar fight, a bar fight with a glass-shard wielding Jeffery Lee Pierce. ‘Fake Kinkade’, the last of the trio, is probably the brightest of the three, but has the same murderous undercurrent.

For me the album starts to tail off here. ‘Two-Headed Coin’ has a killer bass line but doesn’t seem to go anywhere and ‘Run’ – sung by Habibion – simply fails to ignite. It’s not until ‘Light Sweet Crude’ that things really pick up again. The song might as well be a manifesto as thematically it kind of sums up the Obits sound, turbulent and woozy, with the emphasis on the crude. The track kicks like a fucked off mule.

‘Milk Cow Blues’ is a cover of a blues standard by Kokomo Arnold and it’s here that you get a real sense of the mode of compaction that Froberg has been working towards since the Jehu days – away from the flailing proggier excesses of that band, via the punchy hardcore of Hot Snakes, towards something more streamlined and visceral. The track has some of the wiry atonalities that were at the heart of the Jehu sound, but here they never dominate, they’re reigned in to the overall gut-punch tightness of the sound. It’s also on this track that you get the sense that this is a band are totally at ease with itself. Froberg has said that they simply aren’t interested in originality or gimmicks: “we’re not into innovation, as a band innovation is overrated” – a statement which might sound self-defeating in print but it makes sense when you hear them rocking up a storm here.

The album finishes on ‘Back and Forth’ which feels slouchy and undercooked to me. And I think this sums up my eventual feelings of the record – it’s almost there, it’s just lacking something. Knowing Froberg though, and knowing Sub Pop, there is much more to come from this band.