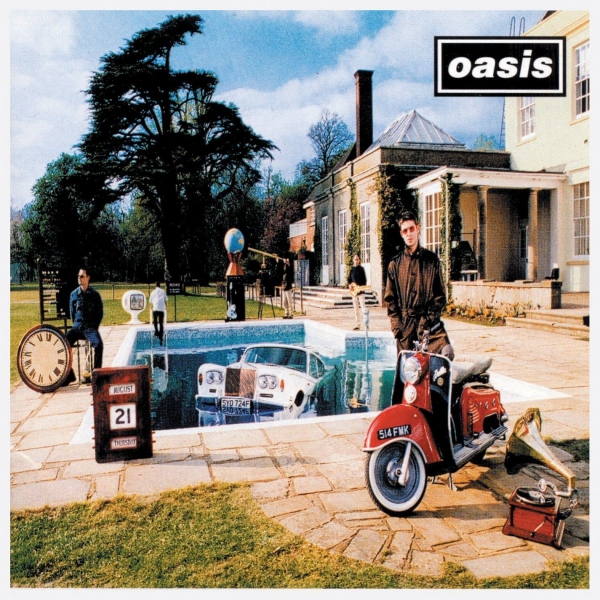 Be Here Now was to Britpop what Altamont was to the Woodstock generation - the messiest of death knells.

Writing for the New Yorker last year, Richard Brody examined the complex metaphor that The Rolling Stones’ doomed 1969 free concert in Northern California provided, concluding that it signalled the end of “the idea that, left to their own inclinations and stripped of the trappings of the wider social order, the young people of the new generation will somehow spontaneously create a higher, gentler, more loving grassroots order.” However much in thrall he’s always been to John Lennon, Noel Gallagher has never been much of a subscriber to the idea that peace, love and togetherness show us the way forward, particularly where his kid brother’s concerned. Nevertheless, left to his own devices and shorn of much regard for the opinions of others, he managed to rustle up two of the most successful British rock records of all time.

The rest is history - debauched, aggressive and frequently gaudy history. For all his wit and love of a quick quip, Gallagher’s tongue has a tendency to trip him up from time to time; at a press conference ahead of Oasis’ three-night stand at Wembley Stadium in 2009, he spent half an hour bigging up the ‘gigs of the summer’ before cheerfully informing reporters that “we always blow the big ones.” Similarly, there’s always been an inconsistency between his dismissal of bands making political points and the fact that the earnest positivity of Definitely Maybe and, to a lesser extent, (What’s the Story) Morning Glory were born out of a desire to counter the miserabilism of grunge with something sunnier. "That would've been fun, wouldn't it, at Knebworth?" he said last year. "Good evening, ladies and gentlemen, and while we're all here, while all the people at the back are on acid and E, round of applause for the miners, wahey! Fuck off."

There’s a reason that photograph of Gallagher sipping champagne with Tony Blair at 10 Downing Street became one of Britpop’s defining images and it’s not just because of how neatly it rounded off Oasis’ rags-to-riches tale. Whether he liked it or not, there was something profoundly political about Oasis in 1997, a year they soundtracked every bit as much as D:Ream’s “Things Can Only Get Better” did. Difficult as it might be to remember in the thick of the UK’s dystopian 2016, there was an optimism about the country back when Cool Britannia was still in full swing and the prime minister had yet to commit enough transgressions to earn himself the sort of lengthy charge sheet that normally gets written up at The Hague. Geri Halliwell in her Union Jack dress might have been the poster girl for that moment in time, but Oasis were its beating heart; working class boys done good, unencumbered by anxiety about overexposure or backlash, wanting to be the biggest band in the universe when they were already the biggest band on the planet.

With the benefit of hindsight, what all of that really meant was that when the wheels did inevitably did come off, they were going to do so spectacularly, especially given that the engine was powered almost exclusively by cocaine. Such was the triumphal climate of the time that when Be Here Now was released in August of 97, the critics went wild for it. After all, the idea that Oasis could do wrong had yet to be countenanced. Nearly twenty years later, both the record and its reception are in amongst the greatest missteps in pop history. Beneath the surface, all of Britpop’s ugliest facets had been bubbling, and they less boiled over than erupted volcanically. The surprising thing in retrospect is that nobody was surprised by it at the time; it should hardly have seemed a shocker that a guy who routinely boasted about his drug intake and flashed his black American Express card at journalists should make a record that was wildly self-indulgent.

Be Here Now was never going to live up to the hype whatever happened, coming as it did a year after Knebworth, but the band's management, Ignition, still did everything in their power to generate an absurd amount of buzz around the album anyway, and it says a lot about how badly the press had their pants pulled down by the record that they raved about it even after a ludicrous publicity drive; it’s perhaps why Jeremy Deller, the conceptual artist, once said that Oasis “ruined British music and ruined British music journalism.” There was an MI5-worthy embargo - “it basically said you couldn’t even talk to your girlfriend about it in bed,” said Select’s Mark Perry of the disclaimer he signed in exchange for a casette copy - and a bizarre attempt at a radio rollout that was aborted after the label decided that Steve Lamacq had failed to sufficiently spoil the first three songs they gave him for those taping them at home by not talking enough over the top of them. All any of that conspired to do was to raise an already unreachable bar all the way up into the stratosphere.

All of which is to say that this reissue of Be Here Now presents a nice opportunity to reappraise the songs on a record that’s only remembered for the notoriety surrounding it, from the fights in the recording studio to the level of cocaine use that made Tony Montana look moderate in his intake. The drugs weren’t the defining factor in what made the album so half-baked; it was more to do with the fact that, once you’re at the top, the only way is down and you lose all sense of perspective. It’s one thing leaving Noel Gallagher, unheard of and on the dole, to his own devices in a bedsit with a guitar and not much else. It’s another entirely to let him get on with writing songs at Mick Jagger’s villa in Mustique, money coming out of his ears, Kate Moss and Johnny Depp for company and the eyes of the world trained on him.

He maintains that he only broke out of a months-long, non-productive malaise by forcing himself into a disciplined writing routine that involved locking himself in a room and only coming out at mealtimes, but the key word there is probably ‘force’, because the lazy nature of some of these tracks paint him as a restless schoolkid as he sat in that makeshift studio, gazing longingly for the playground and ready to sprint out of the door the second the bell went. Whatever your opinion of him, there was an endearing honesty and genuine buoyancy to what he wrote on Definitely Maybe; “we didn’t have a pot to piss in, but it was fucking great,” he once said of “Live Forever”. By the time he came to write for Be Here Now, he was no longer an everyman and his attempts to recapture the universal appeal of old fell flat, the “whoa, everybody, come together now, come on, Richard Ashcroft, people, yeah” message behind the likes of “D’You Know What I Mean?”, “All Around the World” and “It’s Getting Better (Man!!)” now sounding awfully hollow.

Musically, the main issue with Be Here Now wasn’t really anything to do with composition. There’s a passage in Keith Richards’ autobiography where he talks about how he captured that weird, metallic guitar sound on “Jumpin’ Jack Flash” and “Street Fighting Man”; not quite electric but certainly not unplugged. He recorded his part on an acoustic guitar to a cheap little tape machine, hitting the strings hard enough that the microphone would overload and you’d get that noisy, distorted sound back out of it. He goes on to lament the fact that soon afterwards, the manufacturers put a limiter on the recorders so that you couldn’t do that anymore.

Fast forward thirty years, and the 90s equivalent of that was doubtless Gallagher sitting at a mixing desk and wondering why there were only 96 tracks, rather than 960. He’d have gone with that many guitar overdubs if he could’ve gotten away with it on Be Here Now; it’s an album that slowly suffocates under the weight of its own bloat. It’s as if Gallagher and Owen Morris, the producer, were terrified of silence and stacked as many guitar parts on top of each other as they could; the result, far from the grandiosity they were doubtless hearing in their own heads, is a horribly muddy album for the most part. “Magic Pie”, “I Hope, I Think, I Know” and “All Around the World” are particularly egregious offenders, sounding as if they’re being played through speakers made of treacle. The brickwalled mastering technique, meanwhile - the point of which being to make everything as loud as possible - further drowns the detail, another example of something taken to an unnecessary extreme (they got the balance just right on Morning Glory).

The sad thing about this remaster, really, is that there’s tantalising evidence that they might have fixed some of those issues, specifically on the new mix of “D’You Know What I Mean?” It’s revelatory, stripping away so much of the feedback and reverb and, lo and behold, there were drums under them after all, and strings, too. It genuinely breathes new life into a song that was already amongst the album’s strongest and it therefore feels like a massive missed opportunity that Gallagher couldn't be bothered doing the same for the rest of the record. "Someone had the idea that we revisit, re-edit the entire album for posterity’s sake. We got as far as the first track before we couldn’t be arsed anymore and gave up.” There’s poetry in that, given that “what’s the point? I’m loaded anyway” seemed to be very much the rationale behind his failure to pick a guitar up for six months before he finally got round to writing for this LP in the first place.

Instead, then, we get the usual fan service on discs two and three of this new version. The second CD is a largely charmless collection of odds and ends on which the standout is the aforementioned ‘2016 Rethink’ of the album’s lead single. There’s a solitary track from Knebworth, too, “My Big Mouth”, which lacks the studio cut’s fizz and verve; we’ll get to find out whether that goes for the rest of the professionally captured tracks from those gigs when they're inevitably released officially in the not-too-distant future. A cover of The Beatles’ “Help!” should be given the widest of berths, and the B-sides on the disc, including “Stay Young” and “The Fame”, are another indicator of the apathy that had set in; after all, the first two record’s offcuts included the likes of “Acquiesce”, “Talk Tonight” and “The Masterplan”.

The third disc, too, is diehards-only territory in the end, containing the record in demo form, recorded in Mustique with Noel, not Liam, on vocals. They’re disarmingly well fleshed-out and, again, point to what might have been if it hadn’t been for the chaos that enveloped the recording sessions proper back in Britain. What they also indicate, though, is the fact that a good number of the tracks on Be Here Now are very, very ordinary and that, interesting as it might have been to have heard the entire album revamped, there’s not a lot to capture the imagination outside of “D’You Know What I Mean?”, “My Big Mouth” and “Don’t Go Away”. In the end, Be Here Now is endlessly fascinating because of everything but the music itself. By 2000, Oasis were covering Neil Young’s “Hey Hey, My My” on tour. Fitting - they burned out on Be Here Now, and faded away, a spent force, thereafter.