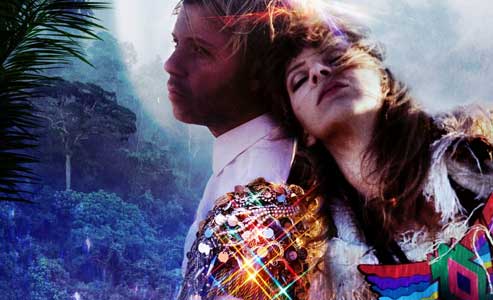 In Mary Shelley’s original story, Victor Frankenstein’s creation was intended to be beautiful; however, the creature was made from a mismatch of parts and his massive body was something out of the ordinary. His quest was for knowledge and happiness, but his appearance conjured sudden, negative reactions. It took a blind man, impervious to his exterior, to understand the true nature of the beast, which was not beastly at all, but rather intelligent, thoughtful, introspective and complex.

Such is the case with the debut record from Sweden’s Niki and the Dove. Aptly titled Instinct, the album is a patchwork of pop elements that refuse to sit comfortably in one genre for any length of time. Given a short sound bite, you might be led to believe that Instinct perpetuates just another pop paradise. Conversely you might hear a mash-up of textures and vocal wails that sound more like a pop-protest of sorts. The truth is that Instinct is neither and both of these at the same time, and if your first response is to turn away, rest assured it is only the uncertainty of the unknown that drives the urge. The Swedish duo prove to be skilled at creating sounds inspired by an ’80s dance ethos and fusing them to create something akin to a post-apocalyptic-electro-tribal-pop-opera. Instinct is a trailblazer in many ways and it deserves your undivided attention.

Malin Dahlström is not your typical pop princess, so she fits the bill as our anti-pop princess hero. Her unwavering vocals flit from soft and mysterious to powerful and pervasive. On the opener, ‘Tomorrow’, she begins with an aesthetic worthy of lullabies and erupts into an emotionally-drenched bellow full of passion and intent. “If tomorrow comes/I want to waste my love on you”. Dahlström’s vocals are delivered with an urgency and intensity that stops you dead in your tracks and her power is multiplied by the efforts of her band mate, Gustaf Karlöf , who provides various synth flavours and a wall of sampled vocal textures that offer an apocalyptic assault on the pop genre. What follows is the post-apocalyptic pop world where Dahlström presides as the new royalty and conventional formulaic pop songs are few and far between, though they do exists in some form.

‘In Our Eyes’ is perhaps the closest thing to a pop song – in the tradition of their Stockholm cousins Abba, or the synth-pop duo Goldfrapp – but Niki and the Dove put their spin on it with a brief but welcomed ambient interlude. It is a reminder that they are in full control and capable of taking the experience anywhere. The following track, ‘The Gentle Roar’, celebrates art-pop with tribal choruses and chants. The song is powerful on its own, but would be an amazing complement to a theatrical stage show. After only four songs, it is clear that Instinct is potent, but it does not rest. ‘Mother Protect’ ups the intensity with a dark rhythmic pulse rooted in minimalism and continuing the electro-tribal feel from the previous track. The song reaches a crescendo with an ultra catchy motif and memorable, empowering lyrics that are instantly sticky. “You can’t keep me down, I am done, I am furious”. Other highlights include ‘DJ Ease My Mind’ which is sure to become a club anthem and the 8-minute epic ‘Under the Bridges’; an absolutely captivating track from start to finish.

Instinct is a record aimed at pushing the boundaries of any musical collection. There are moments of beauty and passion coupled with darkness and mystery. Respect for the pioneers of the genre is evident though the duo forge a path less travelled. Like Dr. Frankenstein’s creation, Instinct should not be judged without an intimate experience, which is where its power lies. Sit down with the album over a lengthy period of time and you will discover its depth and contagiousness. Like Mary Shelley’s work, Instinct is destined to be both relevant and classic in years to come.