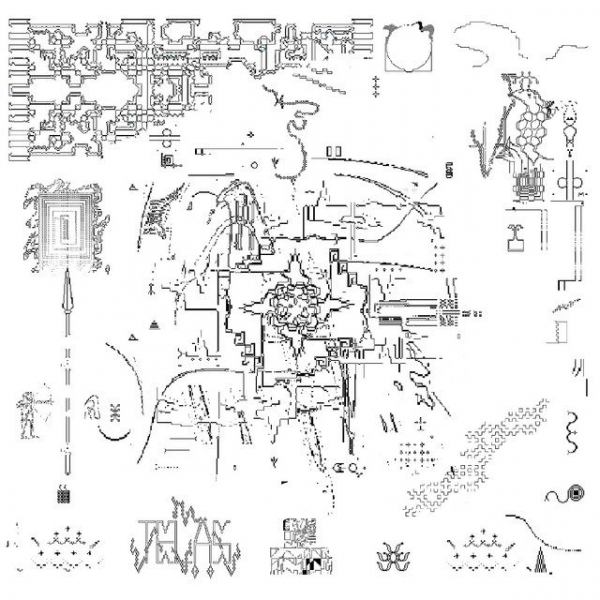 Nicolás Jaar’s third album of 2020 begins with a blast of heavy woodwind and a blitz of clipped synths which wrap around the note like ivy.

Furiously tapped metallic percussion follows, then deep pools of luminous synthesisers with cavernous shots of sound firing across their surface, as if two songs are being performed simultaneously. These are just the opening minutes of “Telahora”, the first song on an album which is symphonic in scope while remaining incredibly tactile, where sounds move like objects in a room in a way unlike anything I’ve ever heard.

Telas is the final destination of a busy year for Jaar; the last album from a furiously productive period of self-isolation which bore the Beyonce-sampling house record 2017-2019, and Jaar’s sixth studio album Cenzias. Telas, his third, debuted during FIL MISHMISH, an 80-hour protest against Israeli colonialism by fledging Palestinian radio station Radio Al-hara.

This new album is a different beast to 2017-2019 or Cenzias: four long songs which have most in common with 2016’s Pomegranates, an ambient album which acted as a revisionist score for a Soviet-era arthouse film. It too arrived flanked by two more accessible works, but cemented Jaar’s status a peerless sonic architect uniquely able to evoke specific cultures and physical environments with sound and tone alone.

Striking examples of this persist in Telas, such as at the midway point of “Telencima” where dainty piano chords are drowned in lolloping sequences of synths and swamped again in dense ambience. It’s the sound of coral swaying beneath an ocean’s surface; a subterranean vignette shot through with sunlight. Jaar’s compositions evoke architecture, deserts and the breeze; landscapes painted with sounds so vivid that it’s easy to forget that nothing is sign-posted. There are no sound clips or field recordings to orientate the songs: he does it with instruments alone. One comparison is Cezanne, who at his most abstract could conjure an entire forest with just a few licks of black and green paint.

Jaar’s trademark echoes of glass and pricks of clipped sound act as a unifying theme, but each song has its own distinct character. “Telahora” is a schizoid epic, while “Telahumo” is it’s darker cousin, opening with a tour down Moorish corridors before plunging into leaden, murkier territory. “Telallas” is the album’s cool-down; the least captivating track here but only through its elusiveness; fragments of sound drifting around one another in dark and light hallways.

A common debate surrounds the 'Sound of the Future': a sonic palette which could shape music in years to come. Looking back a decade, we can see that it was the progenitors of trap hi-hats and the rubber-bass of maximalist pop which would come to define much of today’s music. Since Pomegranates, today’s Chief-Keef and PC Music has been sounding like Nicolás Jaar, whose nimble craftsmanship can sculpt visages out of sound. Through collaborations with more accessible musicians such as FKA Twigs, his style can already be found in the mainstream, but Telas merges futurism with a deep well of culture and history; reserving a space for the past in whatever the future of sound may be.