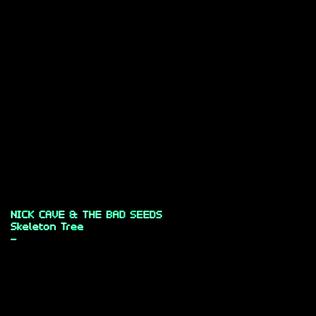 Nick Cave’s latest record was finished after the tragic, sudden loss of his teenage son, Arthur. That horrendous tragedy permeates every note of Skeleton Tree, an album brimming with loss, death, and ruminations on mortality, but also Cave’s inimitable character portraits and a chilling sonic palate.

From the grimy opening tones of “Jesus Alone” it is abundantly clear that the latest LP from Nick Cave and The Bad Seeds is not a triumph of perseverance amid grief but a testament to the emotion’s totality. Okkervil River’s Away was also the product of loss, but the difference between the passing of Will Sheff’s grandfather and Cave’s son’s unexpected end is evident. Sheff’s lyrics were somber, but also nostalgic and emblematic of a well-lived life; Cave’s are bleak and punctuated by lessons learned and discoveries made at an unimaginable cost. Nearly every character on the album feels colored by loss, even when as much is not explicitly stated, and lyrics that would seem deliberately abstract on records like Push the Sky Away take on a far more devastating tenor than ever before.

“You fell from the sky and crash landed in a field near the River Adur / Flowers sprang from the ground, lambs burst from the wombs of their mothers” are the first words uttered by Cave on the album, and the connection to his son’s fatal fall just a few miles from the aforementioned body of water is nearly impossible to miss.

Optimism is a scarce resource on Skeleton Tree, but there are glimmers on “Rings of Saturn” of something similar, perhaps not a reason to expect things to get better but at least a reason to keep striving to fulfill your purpose. Cave, a true master of the space between talking and singing, crafts a pointillist narrative here while keys and synths shine with the glint of hopeful uncertainty.

This emotion doesn’t stand much of a chance in the noir world of Skeleton Tree, and the next track, “Girl in Amber”, is absolutely crushing. Rooted in a string and piano arrangement more traditionally cinematic than anything he and Bad Seeds member Warren Ellis have crafted for films like The Road or Lawless, the track sees Cave revealing his beliefs on the afterlife: an image of a slow and inevitable return to the earth that would feel almost like self-parody were he not to immediately cast the entire concept aside.

“I used to think that when you died you kind of wandered the world / In a slumber ‘til your crumble were absorbed into the earth / Well, I don't think that any more, the phone it rings no more”, he sings. The imagery is grim, fatalistic, and undeniably Cave.

“I Need You” is a true heartbreaker. Cave sounds absolutely distraught, and his delivery is wavering and raw, giving the song a stream of consciousness sensibility. “With your eyes on one, we love the ones we can / Cause nothing really matters when you're standing”, he reflects, invoking something like survivor’s guilt. A simple, snare-heavy drum line and some synth chords occupy the blank space, but the track might as well be Cave a capella.

With its minimalist soundscape there are aspects of Skeleton Tree that are enjoyed more on an intellectual level, but it’s a record that will have engaged listeners clinging to every word. Death and loss have always been topics mined by Cave, but this may be the most visceral and powerful portrait of those feelings he’s ever painted.