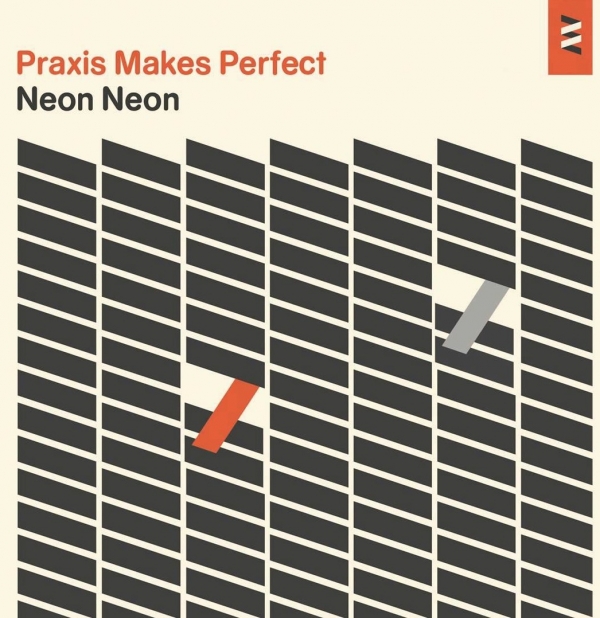 The phrase “mixed emotions” can be exemplified with the help of Neon Neon’s highly-anticipated second album, Praxis Makes Perfect. You wait ages in the vague-yet-keen hope that Gruff Rhys and Boom Bip may join musical forces again, only to learn that, although they are actually back in business, their return is marked by an even stranger, more esoteric effort than stellar debut album, Stainless Style, was. As a record wholly inspired by a random, larger-than-life, Italian publisher, the arrival of Praxis Makes Perfect thus induces joy encumbered by confusion. Or: mixed emotions.

There’s no denying that said publisher makes for an interesting focal point, as the protagonist of this record. A rich left-wing political activist, Giangiacomo Feltrinelli had links with both Che Guevara and Fidel Castro and was responsible for the publication of Italy’s best-selling novel of all time, The Leopard, as well the world-famous Doctor Zhivago. Yet, notwithstanding these facts and the reality of his subsequent mysterious death in the early 1970s, it is inevitable that one does, at various points during playback of this album, ponder with bafflement the whys and wherefores of Feltrinelli receiving this particular homage.

You’ll recall that Stainless Style similarly embraced the concept of musical biography, chronicling the life of John DeLorean. With songs that were, on the whole, so strong as to afford the luxury of choosing whether or not to follow the storyline, taking the simple route and enjoying the tunes without attention to the underlying narrative was a viable option. By comparison, while Praxis Makes Perfect does boast some terrific, shimmering, moments, it simultaneously puts hurdles in the way of an easy listen, especially towards the end where it all gets a bit… well, dull.

It’s not all bad news, mind. The shimmering moments I refer to earlier are, each, very much a delight. The album’s title track opens the set with thundering drum-fills, over which actress Asia Argento narrates news headlines of a life clearly crowded with incident. As an introduction, this track very effectively gets you into the mood of the record. It is followed by electro pulse-popper, ‘The Jaguar’, which channels the album’s best chorus and reminds you how much you’ve missed Gruff Rhys’ voice. Yes, you have.

What sounds like it might be the middle-8 breakdown of ‘The Jaguar’ in fact proves to be the next track, ‘Dr Zhivago’. An ’80s-tinged singalong-er, the song is inspired by the manuscript which Feltrinelli risked his life to smuggle out of the USSR and sees Rhys rhyming “Zhivago” with “embargo”. Well, it works.

The song which prevents Praxis Makes Perfect from peaking prematurely with ‘The Jaguar’ is the Sabrina Salerno collaboration, ‘Shopping (I Like To)’. Salerno is the unfairly oft-forgotten Italian pop singer, who gifted ‘Boys (Summertime Love)’ to the world in the late ’80s. How or why Neon Neon managed to get her to sing on this record is unclear but when good things happen, sometimes you just have to be quietly thankful and not get too quizzical, right? Sounding like its direct inspiration was Stacey Q’s ‘Two of Hearts’ (in a word: fantastic!), ‘Shopping’ erupts into a festival of drums and exclamations of “yeah” in the middle section, before veering off into a key-change and a mantra-chant of: “I’ve got the books/You’ve got the looks”. It’s a bit bonkers and a lot brilliant.

Elsewhere, though, the occasional nice sonic touches (such as the typewriter tinkles mixed in with the rhythm-section on ‘The Leopard’) struggle to disguise the fact that, as a suite of songs brought together by a common theme, the record ultimately fails to hold attention. ‘Hoops with Fidel’, said to be based on “infamous photographs of playing basketball with Castro”, is schizophrenic yet forgettable. Meanwhile, initial album-teaser, ‘Mid Century Modern Nightmare’, is catchy enough but comes and goes too fleetingly.

If there was to be a biopic on Feltrinelli’s life, this album would make a highly suitable soundtrack for it. Devoid of such backing, however, Praxis Makes Perfect offers snippets of biographical information that are, essentially, not quite enough to entice the listener to want to learn more. Still, here’s a tip on how you can maximise your enjoyment of these new fruits of Neon Neon’s artistic loins: click over to your download emporium of choice (see our suggested links below) and create your own Neon Neon 4-track EP with ‘The Jaguar’, ‘Dr Zhivago’, ‘Shopping (I Like To)’ and ‘The Leopard’. The rest is, in the main, much of a muchness.