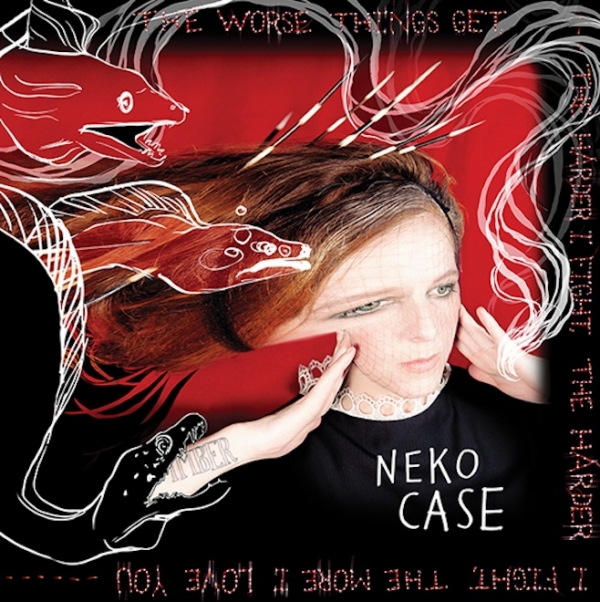 Sometime member of The New Pornographers and consistently thrilling solo artist Neko Case returns with her first album in four years, The Worse Things Get, the Harder I Fight, the Harder I Fight, the More I Love You. The title, coming in at 20 words, is ludicrously bloated, but aside from that debatable faux pas, the album itself is top notch – though it’s been a while since we’ve heard her stunning hybrid of torrid emotions, folk and rock, her ability with them is far from diminished.

It’s her sixth full-length in total – her last being the incredibly successful Middle Cyclone, which burrowed deep into the US charts and made Case the name on everyone’s lips back in 2009. The LP broached bucolic topics, dabbled with nature and spirit animals, and explored a vast range of emotional territory. She was praised at the time for the scope and power of the record – not a particularly new endeavour for Case, as her reputation has been built on those two pillars, but still, the recognition must be nice – and the quality of her vocal work. On The Worse Things Get…, Case delves into fresh realms, spurred on by the death of friends and family; it’s a tumultuous ride, chartering a course between love, life and loss, via a farrago musical styles, including country-rock, a cappella, pop, Americana, neo-grunge, gospel, folk and experimental jazz.

Case’s voice bobs like a carefree duck chillin’ on a pond during swaggering closing number ‘Ragtime’. It’s a bristly, buoyant number splashed with fantasy and Kim Deal-like basslines; there are triumphant trumpets, ’60s lounge piano licks (and… clavinet?) that provide plenty of warm fuzzy-belly feelings and bolster self-esteem – just try and forget her mantra of “I am one and the same, I am useful and strange,’ repeated ad infinitum until the music halts.

‘Local Girl’ is similarly addictive. There’s light, continental guitar, waltzing blobs of bass and enormous chimes – though the record is intensely intimate and journal-like, the music is grandiose, embellished with all kinds of sonic filigree and intriguing aural trinkets. ‘Man’ is so jaunty and syrupy and sweet you’d think She & Him were involved – you’d be right in thinking so, as M. Ward does in fact lend guitar to the track. Folk ode ‘Calling Card’ takes flight through a shadow-dappled copse, showing that whilst Case may be in the throes of grief, there are still enough chinks of light to relish.

‘Where Did I Leave That Fire’, creeps onto our sonar with submarine blip-bloops and Mariana Trench darkness. Jaws-esque bass heralds Case’s chilling voice: “I shook off all the strength I’d earned/ I wanted so badly not to be me.” It’s creaking with introspective doubt and deals with the loss of identity; Case isn’t afraid to warp music to fit her tonal mould. Horror synths and alt. rock axes grind against filthy jazz sax and the shimmer of chromatic piano; above the faintly Gaelic folk drone, she weeps her epic Gothic dirge. ‘Nearly Midnight, Honolulu’, is bone-achingly furious and distressing (see: “Get the fuck away from me/ why don’t you ever shut up?” and/or “My mother, she did not love me,”) despite the fact it’s a cappella, with only a drop of reverb and layered harmonies/backing vocals detracting from Case’s flawless voice. Like ‘Hide & Seek’ by Imogen Heap, Case summons more than you’d ever imagine using less than you’d think possible.

Case’s record comes after a lengthy bout of what she labelled “grief and mourning.” Of confronting her inner turmoil, she said: “I had to look inward more than I wanted. It was sobering, and I often felt like I was blurring the lines of mental illness.” What was undoubtedly a turbulent time has birthed a record flowing with all manner of emotions, ranging from wide-eyed hope to white-knuckled rage. For Case, this is likely a cathartic effort; it’s improbable this path will be revisited, unless more tragedy befalls her, but it’s a tremendous listen and a wonderful demonstration of her talents nonetheless.