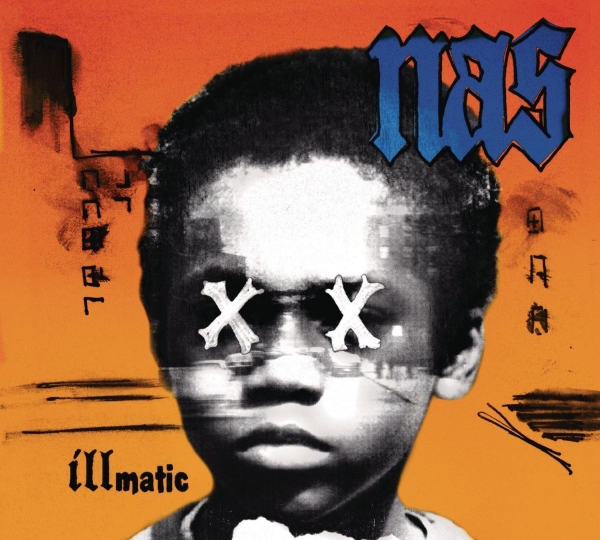 This review focuses mainly on the original 1994 release of Illmatic, and has been scored accordingly.

Illmatic’s original cover art – as well as being considerably subtler than the version above – is iconic now; Nas played with different versions of it for It Was Written, I Am… and Nastradamus, but it’s the original that sticks in the mind, with a faded picture of a young Nasir Jones set against a sepia-toned New York street. The image that best defines the record, though, ended up on the inner sleeve; a black-and-white photograph of Nas, standing in front of what can only reasonably be described as an urban wasteland.

The floor is strewn with litter; pieces of cardboard, odd bits of wood. There’s some discarded sofas; perched on the end of one of them is a man who’s presumably homeless. The abandoned lot in the background probably had something built on it once, but now it’s scattered with debris. The gleaming cross around Nas’ neck suggests he was by no means blind to the trappings of success, even this early on, but you barely notice it with everything going on around him. It’s a startling image; unvarnished, raw, bare. In terms of commercial viability, it’s no wonder it didn’t make it to the cover. But it’s a shame, because it sums up what makes Illmatic the greatest hip hop record of all time – its honesty.

It might be the greatest single piece of storytelling in the history of contemporary music. The sound of the album is incredibly evocative; take opener “The Genesis”, which rumbles into life with that most recognisable of urban noises – the rattling of an elevated train – before giving way to samples that carry enough crackle to suggest that they’re playing through some corner ghetto blaster. It’s an ingenious sonic collage that doesn’t tell you about Queensbridge; it drags you there, kicking and screaming. Men bickering on the documentary film Wild Style, Nas and his friends discussing the state of the street and hip hop in general, and his verse from Main Source’s “Live at the Barbeque” barely there behind it all; that cut, in itself, sums up his lyrical approach – at once both self-aggrandising and socially conscious.

Plenty of other records have used samples more stylishly – The Blueprint springs to mind – but nobody’s come close to harnessing them in a manner that informs the narrative the way Illmatic did. The menacing low piano loop on “N.Y. State of Mind” fits perfectly with the ominous tale Nas spins of constant danger on the city’s streets; on “Represent”, DJ Premier backs images of gang warfare with an eerie xylophone line cut from a twenties silent film soundtrack, and cements his position as the finest crate-digger in hip hop history in the process. “Life’s a Bitch” lifts a laid-back beat from an old Gap Band track, lending it a suitably carefree feel and bringing into sharp focus the bleak nature of a Queensbridge existence; smoking weed on the basis that you might drop dead tomorrow is as close as it gets to the hedonistic good life.

Lyrically, Nas has displayed some decidedly changeable form down the years; on Illmatic, though, he’s untouchable. “Halftime” is a glorious amalgamation of the standard rap requirement for aggressive gloating and a rarer, less commercial inclination towards social commentary; he’ll boast about his jewellery – “I wear chains that excite the feds” – but not without affording consideration to the consequences of unexplained material wealth in the housing projects. He changes up his approach on “One Love”, which takes the form of a letter to an incarcerated friend; the track’s scored through with striking empathy, with Nas taking a little over five minutes to flesh out a character more convincingly, more compassionately, than many paid scriptwriters manage in a lifetime. Often, the sheer power of his storytelling threatens to relegate the music to second place; I haven’t even mentioned Q-Tip’s intricate production on “One Love”, or Premier’s supreme, scratch-heavy sampling on “Memory Lane (Sittin’ in tha Park)”.

In fact, though, the way Illmatic sounds is what sets it apart not only as an outstanding hip hop record, but as a genuinely stunning artistic achievement. The sheer atmosphere of the piece – the palpable mood that permeates every track – is its real triumph. The less-is-more approach taken to the production works exquisitely well; the neat interpolation of “Human Nature” into “It Ain’t Hard to Tell” helps bring a suitably hazy feel to a track replete with references to marijuana, whilst “The World Is Yours”, despite resting Nas’ rhymes on little more than a rudimentary beat and a couple of brilliantly-married samples, conjures up a kind of rugged grandeur, befitting a song detailing how far he and his crew have come since spending their formative years dealing drugs to get by.

So difficult to fault is the original record, and so taut does its forty-minute runtime feel, that it seems ridiculous to release it with any extra padding; Illmatic’s been reissued plenty of times before, though, so the inclusion of a second disc of bonus material was deemed a necessity for XX. Of most obvious interest are the two previously-unreleased cuts, “I’m a Villain” and an untitled freestyle recorded on The Stretch Armstrong and Bobbito show on WKCR radio in October of 1993. The instrumentation on the former is pretty crude – simple cymbals over a burbling bassline – but the lyrical content is clearly born of the same ideas as “N.Y. State of Mind”; like his verse on “Live at the Barbeque”, on which he dropped the infamous “went to hell for snuffin’ Jesus” line, he’s doesn’t lace his plays for shock value – talk of “beef with the president” and overthrowing the government – with the deft societal observations that characterised Illmatic.

The freestyle, meanwhile, has Nas spitting over an xylophone loop that comes over like “Represent”’s chirpier cousin. It’s certainly rough and ready, with snippets of Illmatic cuts cropping up throughout, but it’s a nice touch for diehards on a disc that doesn’t have enough of them. An alternative Premier version of “Memory Lane” has been doing the rounds for years now, but is conspicuous by its absence – as is “Nas Will Prevail”, the “It Ain’t Hard to Tell” demo that’s yet to see an official, high-quality release. The remixes that are included are largely uninspiring and already available elsewhere; bringing some authentic rare cuts to the table would’ve had XX looking considerably more heavyweight.

Talking purely in terms of its credentials as a reissue, then, Illmatic XX is completely dispensable. You’d be better off tracking down a copy of the limited edition gold box set that dropped back in 2012 if you really wanted a repacking of the record that was halfway worthy, although I suspect you might require the means of somebody who sips Dom P whilst watching Gandhi to be able to get hold of one at this point. If XX reopens the discussion about Illmatic, though – or, better still, introduces a new generation to it – then it’s alright by me. The original is a truly magnificent piece of work; thrilling in its literary ambition, masterful in its musicianship and unrivalled in its influence. Like all great works of art, Illmatic isn’t just about the story it tells; it provides us with a fully-fledged character study of the genius behind it.