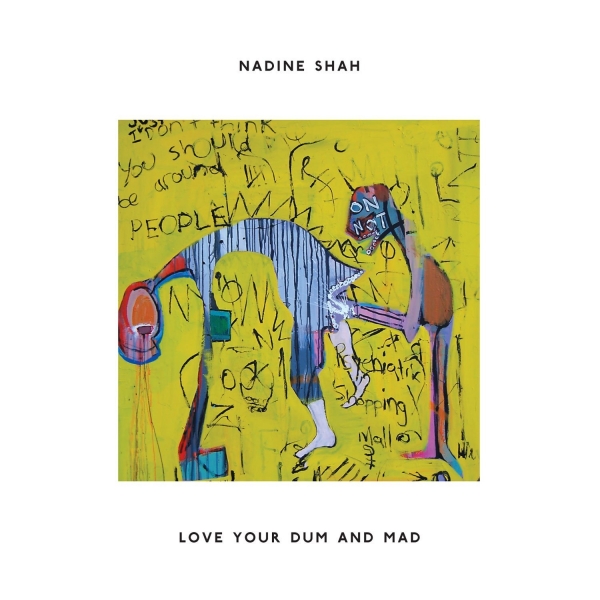 Nadine Shah has already dealt two mortal wounds with her Aching Bones and Dreary Town EPs, but that’s not enough for the Whitburn (a quaint coastal village in Tyne & Wear for non-northerners) singer-songwriter. Her killing blow will be Love Your Dum and Mad, her full-length debut. Already various corners of the internet are palpably fizzing with anticipation, waiting for what’s sure to be a revolutionary, incendiary debut.

Shah’s Norwegian mother, the daughter of a sea captain, was swept off her feet by a gentleman from Pakistan. Shah grew up gazing upon the stony outcrops submerged in the North Sea from her precarious cliff-top home, and her father would sing Urdu ghazals and Sufi hymns, filling the house with music. It’s a mysterious, fantastical start to her story that could be penned by some golden-age of silver-screen romance peddler. It’s a colourful tale of origin, but it sort of explains her sound – as do her arm-length list of influences. She’s inspired by frequent comparison Nick Cave (she told us back in November that she’s not at all bothered by the oft-mentioned similarities), Frida Kahlo, PJ Harvey, Black Flag and Philip Larkin, to name a few.

Produced by Ben Hillier (Depeche Mode, The Horrors), Shah’s long-awaited debut is finally upon us. ‘Dreary Town’, from the EP of the same name, makes an appearance. Cyclic, waltzing piano forges with desolate guitar plucks, the two nervously harmonising underneath Shah’s tempestuous torrent of emotion. It’s like the soundtrack to a deranged fairground, executed by a sombre organ-grinder and a sulking monkey. There’s a Zola Jesus-y twang, minus the electronics, in that it’s operatic, haunting and performed with gusto. Also appearing is ‘Aching Bones’, again from the EP of the same name. The cut’s a post-industrial paean, throbbing bass and clanking metal provide a vital rhythm that provides a spine for Shah’s possessed wail. She sings like a woman on the brink of giving up, allowing herself to succumb to agony – it’s a visceral glimpse into her brooding world.

The other efforts on the record are just as stellar as what we’ve already heard. ‘The Devil’ creaks with macabre guitar hooks, warped beyond rescue. It’s a shadowy tango, seemingly flecked with Iberian influences and the passionate, forceful rhythm. Her voice, trembling as if performing at a Baudelairian cabaret, is the tangible river through what is otherwise a largely electronic cut. ‘To Be A Young Man’ is washed with a post-punk brush, bringing those Nick Cave references to the forefront via Gothic, hopeless lyrics: “Now we’re stalking nine to fives in monotonous routine/ and any hope we had seems distant and obscene.” It’s vaguely grunge-y; distortion-laded guitars and nerve-wracked acoustic six-stringers writhe in harmonious terror, and Shah’s shellshocked croon feels weighed down by ash and dust in her throat.

Nadine Shah’s first foray into the world of LPs is an aural siege. Her unrelenting bouts of emotion don’t leave much space for breathing, and quite frequently you’ll be sucked into a vortex of spiralling despair; in a way, her sounds are claustrophobic. What originally appears to be quite simple, basic instrumentation (voice, piano, occasional guitar or synth), soon reveals itself to be something quite different. There are thick textures and engorged melodies that swell and bloat until they begin to choke you; but Shah doesn’t let up the assault. Her smoky, emotional noxious smog struggles to clear. She’ll hold you under the water with her voice until the last bubble bursts. And you won’t even try to stop her.

It’s utterly magnetic. There are few albums that will make you experience so many emotions concurrently, and even fewer that will still give you chills hours later. Even though it may be tough to swallow some of the brutish feeling, it’s an exceptional record.