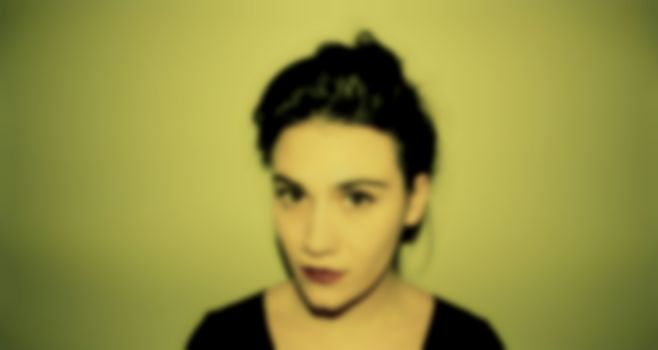 It can take just 44 seconds to fall in love.

That’s the exact time it takes for Nadine Shah’s haunting croon to kick in over an ominous piano refrain on the title track of her debut EP, Aching Bones. Sounding like a young, desolate Polly Harvey, the former jazz singer delivers huge gulps of emotion over the EP’s three Ben Hillier-produced tracks. It’s an amazing introduction – and one inspired by everything from Scott Walker to Urdu ghazals.

When I speak to Nadine over the magic of a Skype video link, she’s a lot less intense than her music would suggest. In fact, she’s a hoot. We giggle our way through the interview – I try to impress Nadine with my command of Urdu (her father is from Pakistan) but the only phrase I know – apart from a choice collection of swear words – translates as asking for her hand in marriage. Nadine politely declines my proposal but does offer to send me an item of tour merchandise. It’s a plain white t-shirt with the words ‘Go Nads’ emblazoned across the front. I promise to wear it.

I ask her whether she is tired of her music being compared to that of Nick Cave’s (she’s not – although she cannot hear any similarities) and then tell her about the time I met Cave and he burped in front of me and then grabbed my head in order to move my face away from any burpy smell. Nadine seems impressed by the anecdote – maybe she will consider marrying me after all.

BEST FIT: I believe the songs on the Aching Bones EP were written some time ago?

NADINE SHAH: Yes, they were written three years ago, but have since been remixed and remastered and only just come out now. I’ve not forgotten about them, but I had kind of forgotten I was a musician for a while. Now that the EP is coming out and it is getting reviews, I’m finding it all a bit strange.

Why did it take so long?

I had the same problem as any artist when they are making a first body of work. You are so, so aware of the fact that it is the first piece that anyone’s going to hear that you take too much time. The songs started off quite acoustic and I wanted to change the sound a lot – that’s what took the time.

You are from the coastal village of Whitburn, whereas I’m from inner-city Manchester – was it great to grow up by the sea?

It always sounds much more romantic than it actually was. My press release says I grew up on the ‘jagged cliffs of the North Sea’ but it was in a detached house with the central heating turned right up. But, it was wonderful – we live on the cliff tops and it is twenty paces to the edge and then you are down on the beach. I used to play in the sand dunes all the time. Every time I go back to Whitburn, the first thing I will do is run up to the sitting room – which is upstairs and has the huge window – and take in the breathtaking view.

Your dad is from Pakistan and your mum is of Norwegian descent. That’s an amazing mix – how has that background influenced your art?

My dad was born in Pakistan and came over here when he was 25 and my mother was born here but her parents are Norwegian. So, I haven’t really got much Norwegian influence at all apart from the fact we all get a Norwegian knit at Christmas and I like raw herring. However, a lot of my dad’s family live in Newcastle, so I’ve grown up a lot with his culture – from religious aspects to food and music. My father has a beautiful singing voice. He only sings in his own language and he sings these wonderful songs called ghazals. They are really sad songs that I think originated from Sufis. I need to learn to speak Urdu properly so I can understand the songs, as they are stunning. You may have heard of Nusrat Ali Fateh Khan – Jeff Buckley covered one of his songs – that’s the kind of thing my father would sing rather than Bollywood music, which I never really heard growing up. Although I now love, love, love Bollywood. My dad would always play ghazals and I hated it when I was younger but I’m obsessed with them now. Maybe my music has been subconsciously influenced by them.

Your sound has been likened to PJ Harvey and Nick Cave. Are you comfortable with such comparisons?

I love it because it sounds really bloody cool, but I don’t think my music is anything like their’s. I’d never listened to Nick Cave or PJ Harvey before I started making the album. I’m such a rubbish musician – I always spoil the illusion whenever anyone meets me. They always expect me to be dark and what have you. I didn’t listen to a lot of music actually. I listened to jazz, because I used to be a jazz singer – I love the ‘Cole Porter Songbook’ – and old 60s and 70s artists, because of my mum who was a 60s chick. However, the one person who really inspired me personally was Scott Walker – Scott is my favourite album of all time. The menacing sound on ‘Aching Bones’ was influenced by him.

You worked with Ben Hillier on your EP and debut album. What impact did he have?

What I’d made was the vocal and the piano line and I wanted it to sound industrial. I wanted to give an edge to what I thought was quite ‘sweet’ sounding. Ben provided that. He told me about how the producer’s role has changed into that of a glorified engineer, as opposed to a great mind helping to bring out whatever qualities there is within an artist’s music and to expand and add to it creatively. When he said he would work with me, I was overwhelmed, because he is a producer I have admired for a long time. Blur are one of my favourite bands and he made my favourite Blur album, Think Tank. I wanted to make sure we utilised every ounce of his creativity because he is a genius and I’d have been a fool not to.

What is your songwriting process?

Well, there is no ‘eureka’ moment. It’s always a case of sitting down, allocating time and thinking ‘you have to write some bloody songs’. So, in a day, I could write 12 songs and ten will be crap but two might have ideas that are worth building on. I sit down at the piano and mess around until I get a melody, then I will start singing a vocal melody on top in nonsensical lyrics. Certain words might come out and I’ll record it and expand on them later.

Lyrically, your words are very dark. The songs seems to be about regret, revenge and lost love. I’m worried for you – have you experienced all of that at such a tender age?

No. I’m just a drama queen who exaggerates a lot. A lot of the lyrics aren’t about myself – I watch a lot of films and read too many books. Usually the characters or storylines that stick out for me are always the ones about injustice or unrequited love. I’m a sucker for it. That’s where I take my lyrics from. You might notice now and again a few words that I might have nicked from a book or film.

You mentioned that you had been a jazz singer. When was that and what did you learn from the experience?

I moved to London when I wanted to be a jazz singer. I was only a wee young thing – 16 or 17. Looking back on it now I cannot believe the amazing experience I gained from doing it. My manager at the time owned the Pizza Express Jazz Club on Dean Street in Soho. It doesn’t sound very promising but it is a brilliant, brilliant jazz club. I didn’t have any friends so I would just go and hang out at the jazz club most nights. I could watch anyone – one time Mose Allison was playing ther and we did a jam session. Georgie Fame was there. They were all a lot older than me but they taught me great discipline in being a musician. I had dreams of stardom, almost being a Whitney Houston-type artist, but they taught me about being a proper musician.

Tell me about your debut album. What’s it called and what is it like?

It’s called Love Your Dum and Mad. I’m very curious to see how people receive the album as a whole, as it starts big – the first five songs are with a full band – and becomes more organic with mainly me and a piano. I told a little white lie earlier on – some of the songs are from personal experience. Unfortunately I had two very close friends who suffered from mental health illnesses and the album is dedicated to them as they aren’t around anymore. Some of the content on the songs is about the taboo of talking about mental health.

Especially, perhaps, in young men who don’t tend to open up about there feelings.

Absolutely. Also, mental illness is abstract – it’s not like an open wound that can be ‘healed’. One of the things I’m really interested in is anxiety. I have chronic anxiety and so many young people I know suffer from panic attacks. A huge percentage of time off work can be put down to anxiety and anxiety-related issues. It’s almost like a plague that no one talks about.

Does your anxiety affect your ability to perform?

No, in fact we’ve found that if I am getting panicky, if I get a guitar or sit at a piano I get better, because my brain is distracted. I’m not focussing on having a panic attack.

Finally, I saw that you have a fantastic piece of merchandise – a t-shirt that reads ‘Go Nads’. I want one.

I’ll send you one. We were talking about merchandise and unfortunately I haven’t got a cool band name. I cannot expect people to walk around wearing a t-shirt with Nadine Shah on it. That’s bloody ridiculous. So, we were thinking of stupid puns. I used to be a runner when I was younger and my mates would always shout ‘go Nads’ at me. We have two – the other one just says ‘Shah-Mone’, which I think is pretty good.

The Aching Bones EP is out on 19 November via Club Fandango.