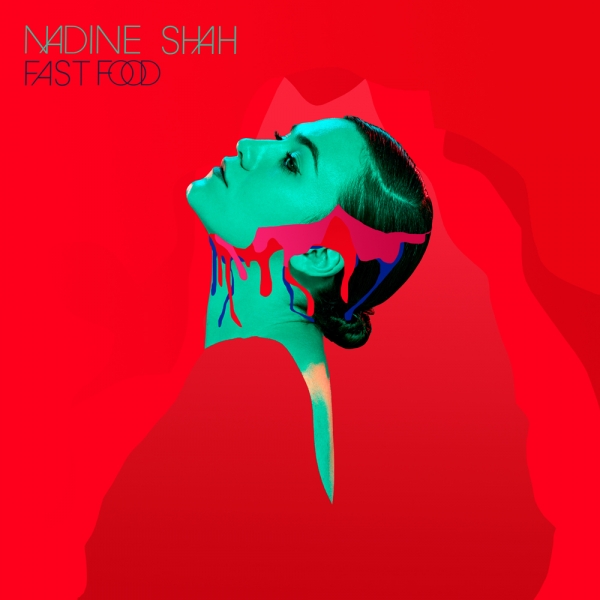 On Nadine Shah’s debut long-player, 2013’s Love You Dum And Mad, she summoned typhoons of claustrophobic sound, sandblasting ears with coarse squalls of anguish, trauma, and her signature smog-gulletted vox. It’s a record of deep complexity, and even now, forensic musicologists are trying to pick through the psych-rubble strewn throughout. It was complicated and painful, but ultimately fascinating.

The follow-up, Fast Food, arrives after a period of relative silence. Now a couple of years older, a couple of years more experienced, Shah attacks the ‘difficult second album’ with a ferocity unseen in far too long. It’s unmistakeably Shah, but it’s streamlined, swaggering and quivering with silent rage; she’s cut through a lot of the thickness of her sound, preferring a blend of Southern Gothic experimentation and post-punk (the Nick Cave and PJ Harvey comparisons aren’t likely to cease quite yet). There’s a poignant clarity at the forefront of this album, and it shows a focused confidence, coolly thought-out instead of heart-on-sleeve.

Despite the delivery being shrouded in fury, a lot of the actual album is more concerned with exploring and dissecting toxic love, the fallout and subsequent melange of regret, closure and despair.

“Nothing Else To Do” is a calculated broodfest of twangy, swamp-folk tendrils, symphonic brass and midnight acoustics. It slowly unfolds, listless and awry, with Shah’s hallucinogenic voices creeping through, evoking exasperated, penitent hindsight: “There was nothing else to do but fall in love…” she croons, whiskey tumbler half-empty in one hand, her head in the other.

Other cuts on the LP wield spectral meathooks to tug at the fibre of your soul: “Matador” is a dusty Louisiana ode poised to soundtrack a particularly deathy episode of The Walking Dead; “Washed Up” mourns dead passion with cyclone howls and polyrhythmic interplay – it feels less restrained than much of Fast Food, and more like Shah’s breaking point

The two singles so far, “Fool” and “Stealing Cars”, are quite probably the most out-and-out ‘pop’ tracks she’s ever made. The latter, with its spiky 00’s axes, rickety beats and frosty glower, offers big singalong moments and basslines like thundercracks. The former, lingering on the darkened border of Yeah Yeah Yeahs and Interpol, is a car chase anthem. Guitars are strummed like passing streetlights, riffs punctuating the motorik like wailing sirens – Shah purrs with a sincere ‘don’t mess with me’ level-headedness, the track evolving dramatically from a lane-darting escapade into a certain death. It boils down to ‘you’re a fucking idiot but I love you’. It’s deceptively forgiving, and demonstrates Shah’s superhuman level of patience.

Patience is a virtue that Shah holds dear on this record. From being able to withstand love’s incessant grind, to the ability to control how the noise develops, it’s an album that only moves when she wants it to. Fast Food isn’t as labyrinthine as her debut – exits are neon-lit fire escapes rather than barricaded doors – but it is just as powerful. In the fat-stripped odes to beautifully imperfect romance, Shah provides us with something infinitely more relatable, and considerably more efficient in making us feel like our gut’s turned to lead.