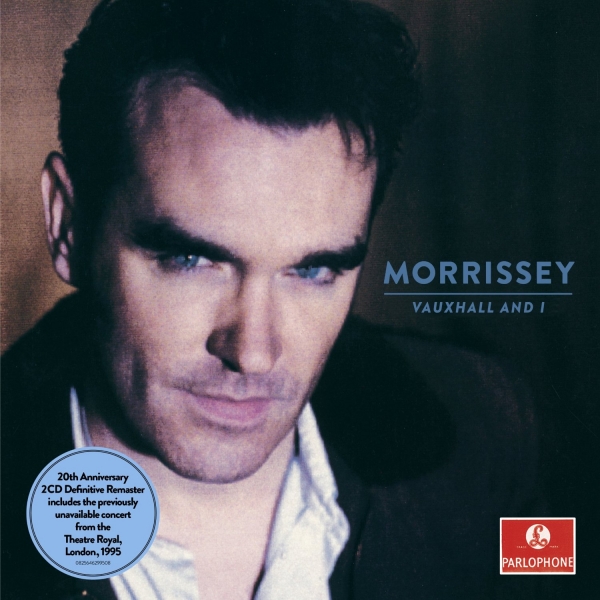 In 1994, Morrissey told the world that he was retiring from music. After ten albums in ten years, and a life of near-constant touring, the recent deaths of three close colleagues was the final straw. The grand dame of pop music was bowing out. Vauxhall & I was to be Morrissey’s last stand. Of course, it didn’t pan out that way – the man came back with a new album the very next year – but it sure sounds like goodbye. Vauxhall & I is portentious, doom-laden, dripping with pathos and the settling of scores. It’s also the best record Morrissey has ever been involved with.

No other album in the man’s storied career sounds like this; the spry glam rock of its predecessor Your Arsenal is missing in action – no doubt down to the tragic passing of that album’s producer Mick Ronson in 1993. Instead, Vauxhall offers eleven tracks which belie the influences Morrissey always touted, but never actively showed off. It’s a balladeer’s album – there are shades of Dion, Joe Meek and, of course, chansonnier extraordinaire Jacques Brel.

If ever there was a modern-day equivalent to Scott Walker’s peerless first four LPs, this is it.

The first five little words of “Now My Heart Is Full” set the tone: “There’s gonna be some trouble.” Screw the punctured bicycles on the last night of the fair – at the age of 35, Morrissey really meant business. The lights are low, the mood is sombre; a nagging two-note riff drifts eerily underneath proceedings. It’s the sound of autumn at its most tempestuous – the clouds are black, everyone has a storm headache, and it’s only a question of when the heavens will open. Come the chorus, they do. Morrissey’s voice rises out of the murk, and the rain starts lashing down:

From here, it’s a swirl of images, characters, situations; Graham Greene’s Brighton Rock gets a look-in, as do some “loafing oafs in all-night chemists.” Chorus after chorus goes by (the verse, by now, long vanished into the distance), occasionally broken up by some patented Bowie-style jangle-and-chug in the guitars. The drama continues to unfold (personal highlight: “Underact, express depression, aaahhhhhh,” [pause for effect] “But Bunnie, I loved you…”), but all we’re supposed to do is “pass by.” As if that’s going to be possible.

Vauxhall‘s character studies are richer and more mysterious than any he had previously concocted – just what did the child in “Used to Be a Sweet Boy” do that caused his narrating parents to be so in denial? – and the wit and wordplay is deeper still. Take lead single “The More You Ignore Me, The Closer I Get”: three years on, Morrissey’s court woes would get an equally woeful song of their own in “Sorrow Will Come in the End” (“Lawyer…LIAR”), but here, they’re dismissed in one wave of the hand – “Beware, I bear more grudges than lonely High Court judges.”

And if at this point, Morrissey’s lyrics were untouchable, his composers-in-chief Alain Whyte and Boz Boorer took the bait and matched them to the best music of his career. Whyte’s delicate touch on the woozy “Hold on to Your Friends” is revelatory, while the wistful acoustics of “Why Don’t You Find Out for Yourself” are astonishing; one of Vauxhall‘s most unassuming numbers, it may just be the finest thing here. Boorer’s contributions are no slouch either, though, and his baroque “Lifeguard Sleeping, Girl Drowning” is unlike anything Morrissey had ever done; this is where all of Steven Patrick’s dreams of being Sinatra finally came to fruit. Nowhere else in his discography can you hear Morrissey acting in front of the microphone like this - almost engulfed by Boorer’s clarinet and Steve Lillywhite’s gossamer production, his whispered croon, bordering on the androgynous, is revelatory. “Please don’t worry,” he intones near the song’s end, “there’ll be no fuss - she was…nobody’s nothing,” before being swallowed up in the undertow of shimmering cymbals and his own wordless cries for help.

And then there’s “Speedway”. The savage, violent, brutal “Speedway”, the sound of Morrissey tearing the curtain down, all the scenery and props crashing around him while he petulantly plays to the peanut gallery. The song opens with him literally cutting his critics down with the sampled sound of a chainsaw, laughing at his foes. “You won’t smile,” he sneers just before the song’s thundering final act, “until my loving mouth is shut good and proper…FOREVER.” The music stops dead for a second, Morrissey having seemingly been silenced (for once). But then the ebow of death sneaks back up into the mix, Woodie Taylor’s drums slam down like hammers, and Morrissey continues to deliver his ultimate malediction: “All those lies, written lies, twisted lies - well, they weren’t lies.” Everything somehow continues to get louder and more intense, before the final twist of the knife for anyone who loves him, hates him, or dares to stand in his way - “In my own sick way, I’ve always been true to you.” Taylor nonchalantly clatters the song to its conclusion, seemingly not realising that he’s responsible for the climax to what might just be the greatest album of all time.

Oh, and that bonus live disc? For once, it’s a revelation. In the illustrious setting of London’s Drury Lane, the Vauxhall tracks retain their atmosphere, while also gaining some balls. A rendition of “You’re the One for Me, Fatty” is almost improved by the sound of Moz constantly being groped away from the microphone by adoring stage-invaders, long-time live favourite “Jack the Ripper” is as tender as it is tough, and the segue from the freak-out finale of “The National Front Disco” into a stately version of ‘Moonriver’ is spellbinding. “I wrote that,” Morrissey deadpans at the end of the latter. He commands the song so well, you’d almost be inclined to believe him.

It can’t be coincidence that, twenty years on, Vauxhall is the only album in his catalogue reissue campaign to remain unfuckedwith in any way, shape or form. For once - artwork aside - he knows when to leave well alone. Vauxhall & I is barely an album. It’s a performance, a recital, an audition monologue. It’s the synthesis of everything Steven Patrick Morrissey ever tried, finally succeeding in one glorious forty-minute burst. It’s a rock and roll suicide, and if you don’t understand what I mean, well…if you need anything more from me, I just can’t explain. So I won’t even try to.