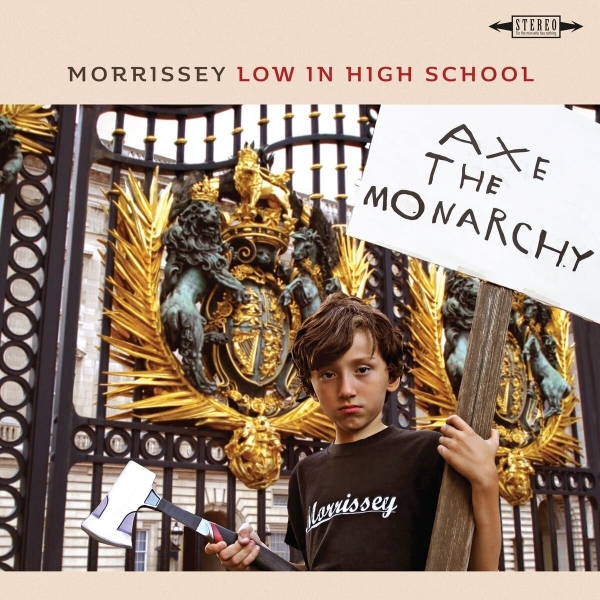 “Society’s hell / You need me just like I need ya” Morrissey declares on “My Love I’d Do Anything For You”, the opening salvo from his 11th solo album proper, Low in High School.

While it may be easy to read that quietly smug couplet as a message to wavering fans, this is not a record constructed as any kind of sop to the insanely dedicated following Morrissey has crafted over the last four decades. It is, in fact, much like its predecessor, 2014’s World Peace is None of Your Business, a sonically adventurous, ambitiously choreographed record that, to these ears, appears to centre around a couple of key, if unusual, themes.

“Home is a Question Mark”, boasts the immeasurably questionable, telling lyric “I have been brave / Deep in every shaven cave”, yet builds, (courtesy of co-writer and bassist Mando Lopez) with rising strings to a swoon-inducing crescendo - “If I ever get there, will you meet me? / Will you wrap your legs around my head to greet me?”. Morrissey’s voice is powerful, almost overwhelming as he proffers the first taste of physicality that defines the record.

Later, on “In Your Lap”, a spare and touching piano ballad that somehow recalls 1991’s “I’ve Changed My Plea to Guilty”, Gustavo Manzur’s intuitive playing supports an empowering, insightful and darkly comic lyric from Morrissey. Lines like “They tried to wipe us clean off the map / And I just want my face in your lap” lead to its final moments which list the horrors of war and oppression and cast them against the primal power of human connection. It’s an album that yearns for tender touch in the face of cataclysmic horror.

That theme is expanded on the blurred, near-Britpop radio buzz of “All the Young People Must Fall in Love”, where nuclear atrocity and human incineration are contrasted with lines like “The kids around here have the best idea / They say Presidents come. Presidents go” and “To watch or to be, it’s up to you”, all garnished with handclaps and comic chorus horns - it’s a hopeful, humorous celebration of simple human interaction that the Morrissey of, say, “Will Never Marry” almost thirty years ago might find disdainful.

Further augmenting this festival of the physical is “When You Open Your Legs”, a Middle-Eastern influenced cabaret number in which a great-big-bag-of-cans Mozza croons “It’s 4am and once again I’m asked to leave this club in Tel Aviv” and observes that “Everything I know deserts me now / When you open your legs”, dismissing the intellectual in favour of the lustful with an indelible chorus swoop perfectly treated by returning producer Joe Chiccarelli (whose work here, as on World Peace…, is precise, yet eccentric and endlessly interesting).

Of course, Morrissey has played with notions of the sexual over the years, often to remarkable effect - everything from “Handsome Devil” to “Alsatian Cousin” deals in some level of coy allusion to sexual pleasure - but here we have him boldly stating his desires, aligning himself with our baser nature. Whether this is a sign of a lack of subtlety or a brave forward step is, of course, up for debate but that clash of the brutal and the human, the savage and the sensual is certainly compelling.

These matters aside there are moments here that are buoyed less by Morrissey’s insights and more by his excellent band; the irresistible quick-step shuffle from drummer Matt Walker and skip-stop keyboard part courtesy of Manzur on single “Spent the Day in Bed” allow the track to rise above a bland lyric; the simple synth stabs and stuttering hook of “I Wish You Lonely” serve to raise an otherwise generic swipe against authority to a more appreciable level.

Then there’s “Who Will Protect Us from the Police” - a bitter anti-cop song that either co-opts the justified hatred of the police force by those who have been murdered and demeaned by them or highlights and supports all those who experience that type of despicable repression and attack. It’s very hard to tell which - but as Morrissey intones the word “Venezuela” across the song’s climax we at least get the idea that he’s pointing at the election conflicts that occurred there earlier this year and offering a token of acknowledgement. What use that is? It's open to conjecture. As it stands, it follows a long line of rants against those in power that may have begun as early as “Barbarism Begins At Home” and shows no sign of slowing down.

There is a serious mis-step on the epic, seven and a half minute “I Bury the Living” with Morrissey bellowing “You can’t blame me, I’m just an innocent soldier / There would be no war if not for me” and the remarkably wrongheaded “Gimme an order, I’ll blow up a border / Gimme an order, I’ll blow up your daughter” in some misguided attempt to remove the blame of war from government and place it squarely on the shoulders of soldiers. It’s genuinely baffling, especially in light of the tone of the album. Happily, in the latter section, with Morrissey repeating the lines “It’s funny how the war goes on / Without our John” over a simply gorgeous, moving guitar line from stalwart Boz Boorer, we are reminded of a more sympathetic, feeling songwriter - one much like the Morrissey many of us elect to remember.

With “The Girl From Tel Aviv Who Wouldn’t Kneel” we have one of three songs set in or concerning Israel (along with the aforementioned ‘When You Open Your Legs’ and the, er, about-to-be-mentioned “Israel”)— this one with a “Sing Your Life” shuffle and a strongly feminist bent but not much of a melody to hang it all on. Taking its title from the stage play of the same name which in turn was based on the diaries of Etty Hillesum whose life was taken in Auschwitz, it’s dark, certainly, but also engenders a spirit of rebellion and defiance.

On closer “Israel”, a title that in itself seems to stir controversy, Morrissey glorifies the people and state of Israel while maintaining the stance offered by other artists who choose to act in defiance of the cultural ban - “I can’t answer for what armies do / They are not you” and pouring adoration with “They who rain abuse upon you / They are jealous of you as well / Love yourself as you should, Israel.” Of course, Morrissey was awarded the keys to the capital city of Tel Aviv back in 2012 and, alongside the likes of Radiohead, Nick Cave and Jerry Seinfeld has performed there on several occasions. This approach then, isn’t surprising - it’s simply worth noting that it will, without doubt, be inflammatory for many, offensive for some.

Morrissey’s voice is at times remarkable here; his sense of melody finely tuned but more inclined to passing moments of beauty than the broad sweep of hits like “Suedehead” or “Irish Blood, English Heart”; the ingenuity of his band and producer is exceptional; there is an intellect and an intuitiveness to almost the whole record that resonates more and more deeply with each listen. While there are certainly moments where seemingly incomprehensible lyrical and thematic choices are made, there are many more where there’s a sense of communion and comradeship.

Society, as it stands, may well be hell. That’s a very fair observation. But as for us needing him like he needs us? On the basis of this record alone one is inclined to agree - with some occasional and strong reservations.