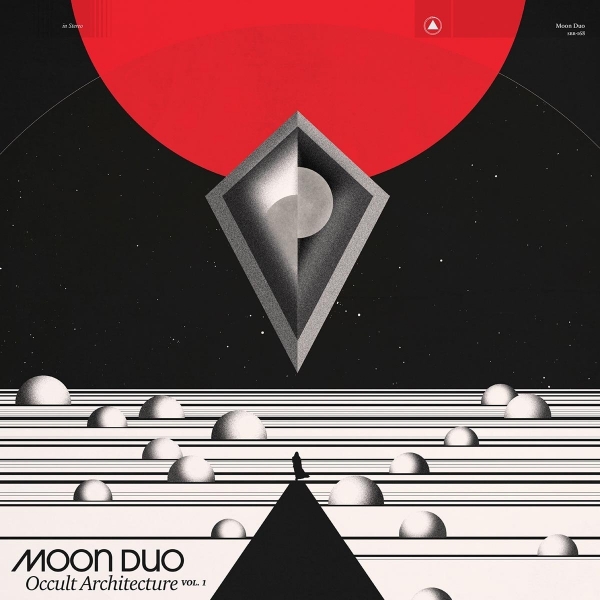 Over the course of their three albums, Moon Duo - guitarist and vocalist Ripley Johnson, also of space rock titans Wooden Shjips, and Sanae Yamada on synths - have stuck very much to that ‘always different, always the same’ ethos. If you jumbled all their tracks from each album together and listened back, you’d probably struggle to tell which came from which album.

Occult Architecture Vol. 1 (a second volume follows later in the year) is their first release as a trio. Drummer John Jeffrey, who was only partially involved in their last album, is fully utilized here, but instead of a more organic sound they've conjured up their most electronic release to date. The synth work also being pushed to the fore is another subtle twist which results in drone drenched repetition.

It's easily their best release so far, and despite synth being the predominant sound here, Johnson - a scintillating guitarist - drops low key solos throughout, each guitar break subtly creeping in to elevate the music towards psychedelia in its purest state.

Mid-paced opener "The Death Set" is stoned and full of swagger; open and expansive, rocky and robust. When Johnson's warm and languid guitar noodling comes to its natural conclusion, 90 seconds of cosmic key-work are accompanied by Johnson groaning "there's a sound in my head". As openers go, this is a statement of intent realised, and mind expansion is put firmly on the agenda.

This widescreen approach is quickly replaced by the claustrophobic electronica of "Cold Fear", which ramps up their Suicide influences to the fore. It sets a simple beat, fuzz bass, nagging reverberation, and Alan Vega-esque clipped sentences lyrical stylings to throbbing machinery.

The introduction of a live drummer has introduced new elements to their sound; it's fuller, more complete, and even though Jeffrey emulates the synthetic sound of drum machines like fellow drummers Jaki Liebezeit from Can or New Order's Stephen Morris, he brings funk elements to "The Death Set", transforms "Will Of The Devil" into an early 80s new wave track, and plays a key role in highlights "Creepin'" and "Cross Town Fade". The former is a brilliant propulsion piece with the alluring vocal interchange of Johnson and Yamada managing to be sultry and cool while remaining isolated and detached. The latter is a furious piece of space disco spiked with krautrock which pulsates and vibrates, the cold mid-70's mechanical fuzz and almost camp sounding keyboard riffing made complete by a staggering piece of lysergic guitar grind.

The band say Occult Architecture Vol. 1 is 'a psychedelic opus in two separate volumes - an intricately woven hymn to the invisible structures found in the cycle of seasons and the journey of day into night, dark into light'. Whatever this means isn't clear, what is however, is that we have here an album of woozy nuggets of sonic delirium. Step inside.