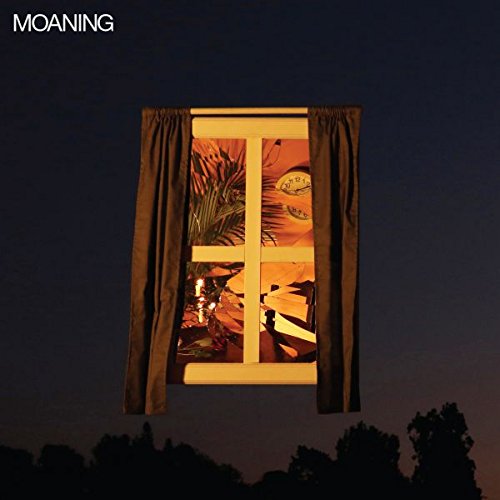 Sub Pop’s latest offering, L.A.’s post-punk trio Moaning show flashes of brilliance of their debut full-length. Ultimately however, they’re let down by a lack of dynamism, drowned in their own fuzz and an absence of ideas.

Cutting their teeth in the City of Angels’ DIY music scene, Moaning sound like a band born from a serious grind. The trio, comprised of Sean Solomon (guitar, vocals), Pascal Stevenson (bass), and Andrew MacKelvie (drums), create music that’s dense and heavy, sitting in the air and fuzzing for the majority of the length of the record. The lead single from Moaning, ‘’Artificial’’, lays their case out bare, straddling the traditional post-punk of the likes of Bauhaus and Joy Division alongside a distinct shoegaze aesthetic.

Despite being roughly considered a post-punk band, it’s this shoegaze element to Moaning’s music that plays the bigger role on the record. Most closely aligned with Title Fight on their Hyperview record though also harking to recent indie acts such as Cheatahs, Solomon's lyrics are often lost amid the wall of noise that the trio erect at almost any given opportunity. Having Alex Newport, of At The Drive-In, Bloc Party and the Melvins fame, on the decks boded well as a means of keeping the action live amid the sludge, and by and large it works fairly well. ‘’The Same’’, the track that encouraged Newport to get on board, is one of the most scintillating on the record, the vocal change towards the back end totally changing the dynamic and tempo of the song. ‘’Misheard’’ and ‘’For Now’’ are more noodley, drawing parallels with fellow luminaries Kagoule, and best emphasising the tight musicianship the trio clearly possess.

For all of its high points, where Moaning suffers is in its occasional drowning of melodies and hooks amid the noise. Songs such as ‘’Does This Work For You’’ and ‘’Useless’’ in particular suffer from a lack of life and ultimately ideas, a far cry from the excellent Bauhaus-esque ‘’Artificial’’. Closer ‘’Somewhere in There’’ is inarguably the worst culprit, a weary three-and-a-half minutes that sounds like Moaning had already clocked off and were hanging around with no intention other than purely going through the motions.

Straddling both shoegaze and post-punk is what makes Moaning both enthralling and frustrating, a hint to the cavernous thrill they're capable of though also threatening to oversaturate and lose themselves in their own dirge. Here's to hoping it doesn't end up enveloping them completely.