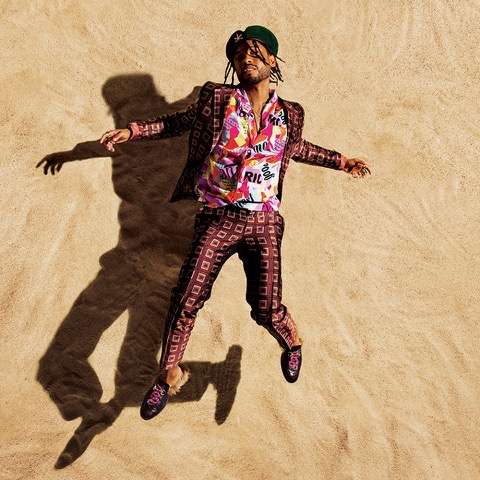 After all the breathless seduction and near-spiritual intimacy of his previous outings, Miguel might not have been favoured by many to make a successful foray out from the bedroom onto the battlefield.

But 2017 moves in strange ways, and the relentless pace of political developments and the absurd follies of late capitalism call for a revolutionary praxis as good as your pillow talk. So it is that War & Leisure, his fourth studio album, proves beyond reasonable doubt that when the time comes, he can be just as much a lover as a fighter.

Some of the heavier, more crowded compositions from Wildheart are gone, and there’s none of the lustful foreplay of "the valley", but he still revels in the sexy-hyperbole-over-brooding-distortion look, and combines his wry lyricism (“Quick to dead the bull like a matador”) and euphoric platitudes over syrupy lead single "Sky Walker". He is often his own best feature, multi-layering husky hooks and soulful exclamations to great and endearing effect.

War & Leisure is an album with a generous helping of highlights, not least because of Miguel’s enviable vocal versatility and affinity for dramatic songcraft, an irresistible combo that sees him playing both hero and villain in his own fantasy. On the sun-kissed funk of "Banana Clip", war is an assemblage of over-saturated music video cutaways, and Miguel is the romantic guerrilla with an M16 on his lap, Korean missiles in the sky overhead, and a playful turn of phrase on his mind: “You know I stay down, way down for you / Talking limbo / And my love, it won’t stop / Got that extend-o”. It’s a vibe sharply inverted in "City of Angels", a guilty ballad sighing through a recalcitrant, distorted riff, pummelled by thunderous gunshot-claps, where the buoyant lothario has become the lovelorn confessor: “I was at Townhouse down in Venice Beach / Stealing moments with you-know-who / We won the war, but not a day goes by / When I don’t think I should have been with you”.

His concentration only holds for so long, though – up next is "Caramelo Duro", with a sticky, globular bassline and a Spanish chorus that doesn’t so much step as bounce on the toes of Calvin Harris’s "Feels". There’s something to be said for the inconstant, impulsive pacing reflecting a struggle to find focus, to separate the personal and the political, to maintain attention when assailed by the apocalyptic anxieties and beeping, buzzing ephemera of the present day. On "Come Through and Chill", over caressed chords and warm harmonies, Miguel texts an old hook-up while J. Cole’s thoughts wander: “You been on my mind like Kaepernick kneeling / Or police killings / Or Trump saying slick shit / Manipulating poor white folks because they ignorant”.

For all the record's buoyant interludes and wavy neo-R&B, it is inescapably full of war: the threat of nuclear petulance by choleric dictators, the militarisation of law enforcement and its targeting of black Americans, the alienation of societal connections and solidarities. It all comes to a head on ‘Now’, as Miguel directly addresses the “CEO of the free world” bankrupting the US like one of his cheap casinos, sowing a foul crop to be reaped in the very near future. “Now now now / Now now now", he demands; "We only suffer what we allow”. Amidst all the fake news, it’s a damning and urgent truth.