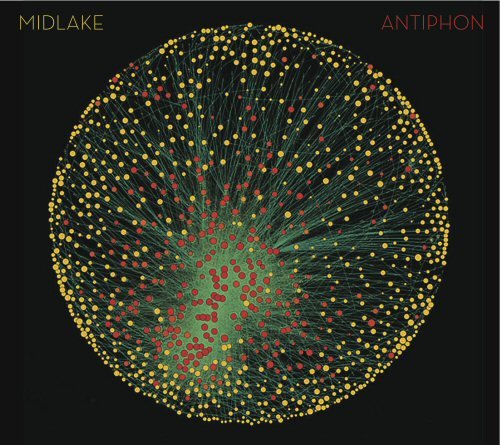 Yes, Tim Smith has left Midlake, and over the course of the band’s excellent last two albums, The Trials of Van Occupanther and The Courage of Others, Tim Smith has kind of been Midlake, his soaring vocals being their kicker and their USP. Midlake have never settled on a defining style, always seeming to be aping their more prominent influences — Fleetwood Mac on Van Occupanther, Fairport Convention on Courage — so that the only defining feature of their sound was that evocative, dominating voice.

Taking the wise but nevertheless brave decision to scrap the material they’d written with Smith in the two years before his departure, the remaining members of Midlake wrote, recorded and produced their fourth album, Antiphon, in six months, determined to follow through on their commitment to release new music in 2013 and determined, perhaps, to put their former frontman behind them as soon as possible. There are, then, two good reasons for not mentioning Tim Smith again in this review: 1) Out of respect for the band who deserve to have their music discussed on its own terms and 2) Because, as a measure of the success of Antiphon, the ghost of Tim Smith does not haunt this record.

Eric Pulido, the lead guitarist who has taken over as lead vocalist, has claimed that Antiphon is the most “honest representation of the band as a whole” they’ve yet recorded, and it’s interesting that it’s far closer to their psychedelic debut, Bamnan and Slivercork, than it is to either of its direct predecessors. The more delicate instruments that pervaded their recent works still remain — but flute, cello and piano are embellishments rather than central attractions. The opening bars of the eponymous first track set the tone, driven by drums, bass, and a screeching, early Robert Plant-esque guitar.

The central two tracks of the album provide its defining moment. “Vale” is apparently the only left-over from any previous incarnation of the band, but it’s probably the last song on the album you’d guess was a Midlake track. A looping, swirling instrumental, it recalls the heaviest touchstones of ‘60s psychedelia. It is immediately followed by “Aurora Gone”, by far the most traditionally Midlake-sounding song on the record, with Pulido channelling one-time collaborator John Grant on the only chance he really gets to stretch his wings and dominate a song with his vocal performance. Pairing the two tracks together as the album’s centrepiece is something of a risky move, and it’s probably the point at which listeners will really make up their minds about Antiphon.

The spirit of Grant is conjured again on “This Weight”, with Pulido borrowing Grant’s trademark lyrical style of somehow being both self-deprecating and self-aggrandising at once: “I’m not fooling anyone but me/ I don’t love anyone but me.” Sadly, “This Weight” is a tent-pole propping up the album’s uninspired latter half. It’s perhaps unsurprising that, in their haste to get a 10-track LP together in such a short space of time, the entirety of the record doesn’t quite hold together, but mitigating circumstances don’t make Antiphon’s tail-end any more of an engaging listen.

If Midlake seemed to have lost their sense of fun on The Courage of Others, though, they’ve certainly rediscovered it on Antiphon. Even in its flatter moments, at least the band themselves sound like they’re enjoying it. With such a strong back catalogue, and given the events which preceded the album’s writing and recording, it was never going to be the band’s strongest effort, but what fans will be looking for is an indication that Midlake can continue to grow and evolve without their talisman. They’ve proved that, perhaps most of all to themselves, and with it they’ve exorcised the ghost that might have threatened to overwhelm them.