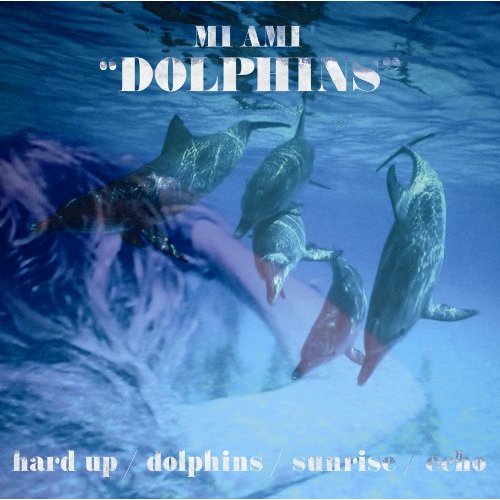 The very definition of a detour is to provide relief, à la the separate route that emerges from a blocked area of construction or traffic while driving. Unfortunately, the detour taken by the two surviving members of Mi Ami on Dolphins provides the opposite – a rather perplexing and obtuse set of songs that fail to provide any musical relief whatsoever.

Dolphins is the latest four-song release on Thrill Jockey, a label that’s certainly no stranger to the Avant-garde or left-of-center. Yet the former Touch & Go trio formerly majoring in “drum punk” are now left to their synth devices without bassist Jacob Long. The shift from the dub-punk textures of Steal Your Face to Dolphins is incredibly surprising given the percussive backgrounds and talents of leftover members Daniel Martin-McCormick and Damon Palermo.

Instead, Dolphins serves up four tracks that span 30 minutes that lack the punch behind the band’s previous chaos and instead neuters Mi Ami’s appeal. Suddenly Martin-Mccormick’s vocal yelps become annoying instead of accentuating, and the songs artificially meander without any sense of place or purpose. The atmosphere remains the same, but it lacks the interest without the proper equipment. In other words, synth swirls duking it out don’t exactly make for a compelling listen.

It’s unfortunate that Long took more with him than he could have known. The maturing melodies on Steal Your Face exhibited a trio heading toward impressive waters. The tribal thump of ‘Dolphins’ tries to captivate at the same level three minutes in, but the pieces fail to connect at song’s end. Perhaps a new audience awaits, but the current one will be left confused and frustrated.