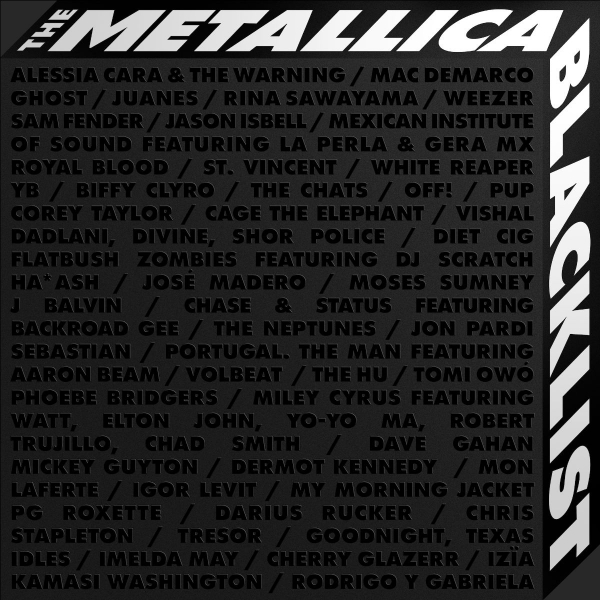 OK, let’s get the obvious out of the way: a 53-song tribute collection from as many different artists to a 12-song album is indulgent - wildly so - and that’s even considering what a cultural and commercial behemoth said album is.

But, then again, you probably didn’t need a four-and-a-half-dozen song collection to tell you how far-reaching Metallica’s eponymous 1991 album is. Just look at a few of its astonishing stats: it holds the record as the biggest-selling album in Nielsen Music history, with 17 million copies sold (domestically) and an estimated 30 million worldwide; it debuted at number one with 598,000 copies sold, and it stayed atop the Billboard 200 for four weeks; for the current week (September 4) of the Billboard 200, it’s at 135, up 23 spots from last week, and brings its 30-year total to 622 weeks on the chart. All of this from a thrash metal record.

So, yeah, Metallica doesn’t need any (more) press. But that’s what The Metallica Blacklist could’ve ended up being: a 245-minute advertisement. Even with the highest highs of this collection—SebastiAn’s stupid-fun disco-infused house mash-up of “Don’t Tread On Me” and “Nothing Else Matters,” Moses Sumney’s delicate and achingly beautiful take on “The Unforgiven,” and Rodrigo y Gabriela’s impressive flamenco transformation of “The Struggle Within,” to name a few—it still feels like a corporate pat on the back.

Or, rather, it would if not for its two saving graces. The first is the fact that the proceeds from this collection are going to charity. As the accompanying press release states: “All profits from The Metallica Blacklist will be split evenly between the All Within My Hands Foundation and 50+ charities chosen by the artists who play on the album.” Which is, ya know, a neat thing for them to do.

The other saving grace is that there are some excellent discoveries waiting to be heard across a surprisingly wide array of artists and (sub-)genres. The collection features everything from safe recreations (White Reaper’s “Sad But True”) to left-field rejiggering (J Balvin’s rap reimagining of “Wherever I May Roam”). Elsewhere, you get snotty garage rock (PUP’s “Holier Than Thou Art”), Indian electronica and rap (“The Unforgiven” from Vishal Dadlani and DIVINE) and pop-industrial (Rina Sawayama’s “Enter Sandman”). Additionally, there are also some nifty moments—like the “Whiplash” tease at the end of Corey Taylor’s otherwise-pedestrian take on “Holier,” Meechy Darko’s song-stealing verse during Flatbush Zombies’s “The Unforgiven,” and Tainy’s nice-trick production for J Balvin's “Wherever” that cuts up the original’s guitar solo into its own hook and then morphs it into an emergency siren—that make this collection worth exploring. You can add to all that the sheer breadth of artists, both known and un-. Even if you follow music closely, it’s likely there’s at least one new artist (or sub-genre) to discover here.

There are two drawbacks to Blacklist, though. First, there are 12 (!) different versions of “Nothing Else Matters”, twice as many as any other song. Did the world really need four piano interpretations and two different country versions (even if Chris Stapleton’s has a cool jam at the end) of this one track, especially when “Of Wolf And Man” and “The Struggle Within” only get one version each? Probably not. This, however, shouldn’t distract from the “Nothing”’s worth checking out, including there’s Miley Cyrus’ fascinating mess—featuring six artists including Elton John, Yo-Yo Ma, and Chad Smith—and My Morning Jacket turning it into a lighthearted ditty that’s ready-made for car commercials. The other downside is the handful of inessentials here. It’s not that Weezer’s “Sandman,” Royal Blood’s “Sad,” and Volbeat’s “Don’t Tread” (among others) are bad; instead, they’re simply uninteresting. They don’t add anything new. “It’s a little stock,” in other words. But, of course, these are minor gripes.

So, then, we’re back to where we started: 53 different artists from around the world - including Japan, Sweden, and Colombia - coming together to celebrate a world-conconquering album. And if you’re at all surprised a thrash metal record can bring together UK garage rock, Mexican electronica, Russian classical piano, and Mongolian folk-metal and have it make (any) sense, perhaps Phoebe Bridgers, whose stunning and haunting chamber music reading of “Nothing” is the best of the dozen, explained it best: “[Metallica] is a rock band. It’s kind of a gateway to metal because they’re so hooky and you can hold onto so much of it and it actually can get stuck in your head. So that’s what I’ve always loved about Metallica is that they don’t shy away from a great hook.”