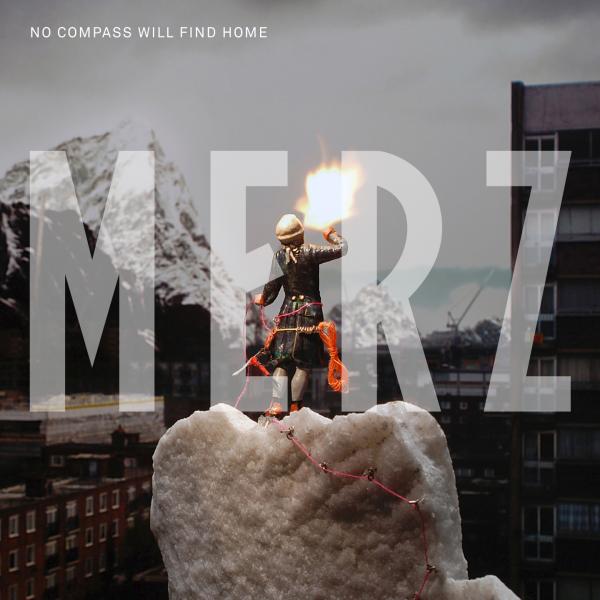 Given the various elements at play from the fourth full-length release by London’s Conrad Lambert, or Merz, No Compass Will Find Home really shouldn’t fit together and present with any sense of cohesion. The record bears a folk-pop spirit at its core, but forces its way to the periphery with a buffet of textures including ambient interludes, unconventional dance rhythms, towering synths and ultra catchy guitar riffs. Content to play with tension, Merz infuses opposites into the arrangements with dark undercurrents marching alongside sweet melodies. Other than Conrad’s vocals, No Compass… lacks an identifiable musical characteristic from track to track, yet manages not to sound like a compilation album, partly due to the quality of songwriting and the sheer talent of the curator.

While the music on No Compass… refuses to be neatly defined, each song, save for a few brief interludes, bears unique magnetic qualities that encourage the listener to appreciate the complexities of the work, at the same time recognising its accessibility. Tunes like ‘Judge’ submit to easy hooks and grand choruses while the title track appears to be firmly rooted in a subdued soundscape led by classical guitar nicely juxtaposed with a subtle distorted drum that sounds as if someone in the distance is trying to break down a door. Until about the 4:40 mark, that is, when a hurried, edgy drum kit takes over, guiding all the other elements to a disfigured crescendo. Not to be outdone, ‘Our Airmen Lost’ breathes intensity into a record that previously only advertises it for brief but beautiful moments, with an urgent relationship emerging between Conrad’s storytelling and his choice of musical conduits.

Though No Compass… may be void of conventional uniformity, Conrad’s skill as a musician and producer is glaringly evident. Although the sounds and styles are unique from track to track, there is a sense that not only were the songs hatched exclusively in Conrad’s own image, but they appear on the record precisely as conceived. Too often with solo musicians, albums become warehouses of sounds inadvertently and exclusively showcasing the latest and greatest software capabilities rather than the mastery of the producer. This album has more of a boutique aesthetic, celebrating music composition – a dying art in the post-studio world. From his soft guitar picking on the opener ‘Arrows” to the substantial dance rhythms in “Eudaimonia’, each track exemplifies a the idea of musical virtue and is a testament to the talent of its creator.

It is increasingly difficult to earn a badge of distinction amidst the noisy digital milieu that occurs from the daily hunt for music. Merz has demonstrated he belongs in the upper echelon with his latest solo offering. Unfortunately, with a January release date, No Compass will miss the chance to appear on any “Best of 2012″ lists and risks being overlooked by the time the blogs roll out for 2013. Nevertheless, the quality of the tracks are enough to keep the most hardened of critics occupied and the depth of the album, both musically and lyrically, should hold your attention, whatever month it is.