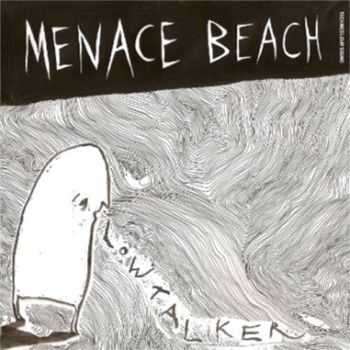 So Menace Beach are a ‘supergroup’ according to the internet’s music media; the very word conjuring up images of self-awareness-deficient musicians attempting to out-solo each other having abandoned the concept of reality, probably with the help of Flea. In that sense it could definitely be argued that Menace Beach are the most refreshingly unassuming supergroup, perhaps ever; the original duo of Ryan Needham and Liza Webster have wisely surrounded themselves with the able bodies of MJ (Hookworms), Nestor Matthews (Sky Larkin), and Robert Lee (Pulled Apart By Horses).

We’re also told that Mansun’s Paul Draper couldn’t resist dropping in to throw his ten cents into the EP. In all honesty, the size of the revolving cast comes as a surprise, as Lowtalker is a pleasingly un-convoluted affair, not attempting to feign originality, but rather concentrating on putting a slight modernist psych twist on shoegaze and vintage indie rock.

Across this EP’s five fizzing tracks of cracked and warping psych pop, Menace Beach don’t deviate from that blueprint of unashamed nostalgia. Suspicions that we’ve retrodden every niche of guitar music well past the point of expiry prove to be as yet unfounded by introductory track “Fortune Teller”. It sounds every bit as incendiary as it would have done twenty years ago, with innocent melodies crashing into screaming keys and the whole thing collapsing into an introverted, contradictory mess that has lost none of its vitality.

The influence of MJ appears most apparent on “Honolulu” which drags the Pixies past the millennium as a spiralling buzzsaw of a psych-indebted guitar rips through the solid bassline which anchors the track. Elsewhere, “Where I Come From” brings to mind a more surreal, ethereal Blur, (which surprisingly turns out to be no bad thing) and “Cheerleader” rounds things off in sturdy fashion by lamenting the cyclical nature of broken relationships, signing off with a minute-long abstract wig out. It’s a fitting parting shot as it could almost be taken as an encapsulation of Lowtalker itself; simultaneously concerned with uncomplicated nostalgia, yet quietly indulging in the slightly-less-conventional. It makes for an intriguing introduction, and a much needed reprieve for supergroups everywhere.