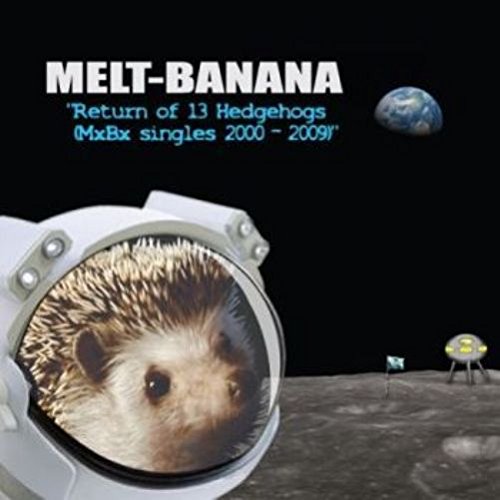 Japanese noise assassins Melt-Banana may well have been thrashing out blistering rockets of screeching, avant garde, hardcore for well over twenty years now, but my gawd do they still feel like a pulverising assault on the senses.

You know a band is brutal when the guitarist has to wear a surgical face mask on stage to stop his nose from bleeding. Originally inspired by the scorched earth racket coming out New York’s No Wave movement in the late 80s, Yasuko Onuki’s violent shrieking and Ichirou Agata’s barrage of sonic vomit made them cult heroes of Tokyo’s underground scene and won high profile fans in Steve Albini, Kurt Cobain and Lou Reed.

Always a firm Peel favourite too, their comeback album Fetch (2013) reminded just what a mighty, visceral force they are, and now new compilation Return of 13 Hedgehogs collects together their non-album singles from 2000-2009.

Although not necessarily the band’s most celebrated period, it charts the gradual evolution of their short 30 second thunder bolts into three minute, chaotic collages of Dadaist noise. As always, the shrill, cartoonish melodies are met with electro-shock storms of distortion, but some vague semblance of a song does start to emerge underneath what mostly sounds like a video game arcade being hit by a nuclear bomb. It’s a hell of an experience, whether fully initiated with the band or not.

Standout moments include the bonkers 100mph neon glitch-pop of “Sweeper”, the cranium-grinding lunacy of “Steel Me Lust” and the manic bleepy grunge rush of “Creeps In White Cake”, but there’s some fantastic covers thrown in too. Devo’s “Uncontrollable Urge” gets warped into a blasting piece of abstract, candy-punk, Toots and the Maytals’ “Monkey Man” becomes a gonzoid ska comic-book soundtrack and The Damned’s “Love Song” rages away in a high-intensity garage cacophony that stays fairly loyal to the original.

At one point I’m pretty sure I hear Sonic the Hedgehog getting tortured with a dentist’s drill, and that’s kind of when you realise that there’s a healthy dose of taking the piss going on here. The spirit of it seems to be as much Monty Python as it is Sonic Youth, and Yasuko is clearly getting the biggest kick out of it all – something many extreme, experimental acts lose sight of. Whatever the hell is going on, for better or worse, there’s nobody that sounds quite like Melt Banana.