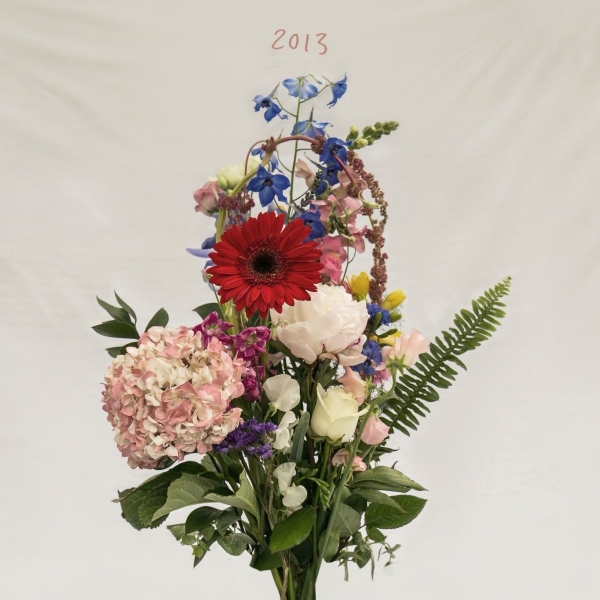 Reinvention is a difficult thing to pull off in any art form, not least in pop music.

When it’s done brilliantly, as Scott Walker did when he embraced Jacques Brel for his first four solo albums, it’s a joy. Done badly - check Kevin Rowland’s decision to relaunch himself as a pseudo-transvestite singing an odd collection of cover versions for his Creation Records album My Beauty - it can be a disaster.

Ironically, both of these artists have an influence on ex-Race Horses frontman Meilyr Jones’ solo debut. The last time we saw him was on their pop-infused album Furniture, yet on 2013 he’s a different animal who draws on the wider world of art just as much as he does the world of pop music.

Using a similar approach to hip-hop, he combines musical samples of others' songs with his own but plays them on live instruments instead. These instruments include guitar, bass and drums but also all manner of strings, piano and brass which lends 2013 a panorama of musical depth that’s held together by Jones wonderfully impassioned voice. 2013 is so wide-eyed and confessional one can’t ascribe any cynicism to it, such is the joy of the songs it comes across as an affirmation of his love of music rather than plagiarism.

Presented as a compilation of himself over the period of the year of its title it opens with the line, spoken by what sounds like game show host introducing the first track, ‘“How To Recognise a Work of Art" by Adrien Meilyr Jones,’ which starts with a furious Northern Soul drumbeat. When the brass joins in it recalls the soul-stomp of Rowlands’ Dexy’s Midnight Runners in their pomp on Searching For The Young Soul Rebels. The song itself goes on to pose more questions than it does answers, namely what is the nature of authenticity? Who is genuine and who is a fake? It’s a conspiracy theory that’s quite rightly left to the listener to work out.

But if the opener leads you to expect a record of pop barnstormers, this is debunked with the following “Don Juan” which is a distinctly classical piece of music set to harpsichords and pianos that reveals Jones to be as formidable a composer as he is a wordsmith. Vocally, whilst there are reminders of other trailblazers - “Return To Life” sees him embrace the almost country-like vision of a song like Scott Walker’s “The Seventh Seal” - his voice is unquestionably his own.

In a record full of musical references to other artists - on “Don Juan” alone he manages to quote Neil Young, Elvis Presley and The Who - he retains his own unique storytelling style which jumps from first to third person, yet retains an ineffable intimacy. “Featured Artist” sees him cast as a renascent but aging has-been popstar who refuses to rehearse, “Olivia” is a story of unrequited love.

But the centrepiece of 2013 is “Love” which starts with Jones singing the line “Just another day” before speaking the line “Well, it is, but…” The humdrum introduction of the opening lines unravel to be something much more fantastical, as the song reveals itself to be a meditation on the nature of God, where we can't see the stars in a city because of the smoke created by industrialism, “Without God, the stars don’t shine.” Musing on the nature of commerce and remaining a romantic sums him up perfectly.

There are two key reasons to fall in love with 2013. Firstly, it has an irresistible love of music, be that of the pop or classical form but secondly, and most importantly, it’s a record that as a body of work is one of the most exhilarating and emotional released so far this year.

2013 is as much an adventure story, autobiography, romantic poem and a classical opus as it is a pop record. But what makes it so convincing comes down to Jones’s passion. Every note of the record convinces you that the Welshman believes 100% that he’s on the right path, which, of course he is. A classical pop crossover has never sounded as good.