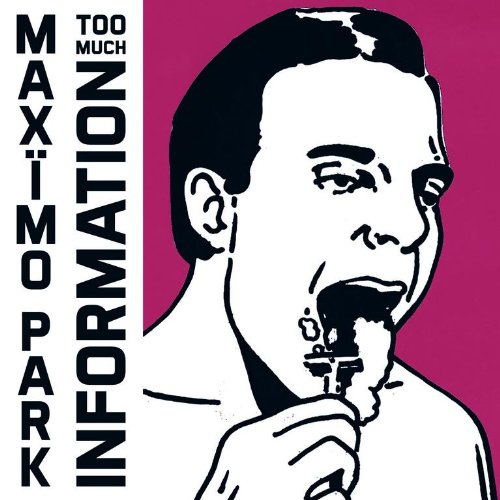 For those not paying attention, well, there’s actually been little to pay attention to in regards to Maxïmo Park for the last few years. Their 2005 debut album, A Certain Trigger, was nominated for the Mercury Prize and they were at that time a very exciting guitar band. Most of their original tracks, and a few from Our Earthly Pleasures,remain really good listening while live the band have never disappointed. It’s a shame then that it simply hasn’t happened for them, least not of late – maybe because it’s taken until now, and new album Too Much Information, for them to shake enough of their mid-noughties sound to be regarded as a worthwhile investment of precious listening time.

This could well be their final throw as Too Much Information is as current as Maxïmo Park have been on record since their debut – or least dated we should say – with competent use of instruments new to their production. Notably on “Brain Cells” the difference in aesthetic is unbelievable. It’s sinister and distant, nodding to the likes of Hurts or Mirrors while still retaining the choppy melodies that fans will recognize. It’s probably their best song in quite a few years and worth checking out. It is of course the band trying to fit in with 2014, rather than any attempt to define the year with their own sound. In that, it’s very safe and a little disappointing. That’s what makes it feel a make-or-break album, as they try one last time to make sense as a contemporary outfit.

“Lydia The Ink Will Dry” is actually what helps this settle as a decent album though as it solidly demonstrates their apt for classic songwriting, pocketing as much from the American 80’s alternative scene as Britpop in a well balanced manner. It sounds more natural for Maxïmo Park, more of what we want, but less of what will potentially make this record a success – and in that compromise you can make your own presumptions.

And that’s how the album plays out, in part an investment on their behalf to integrate themselves into what’s going on around them, and inarguably accomplishing that, looking no further than “Is It True” for further validation. In other parts, such as on “Drinking Martinis” and “Midnight On The Hill”, it’s bloody good guitar pop for guitar pop fans. It can be straightforward, but more often than not on Too Much Information it’s actually quite clever. That’s no surprise as they are a very clever band, if still somewhat struggling to define themselves.