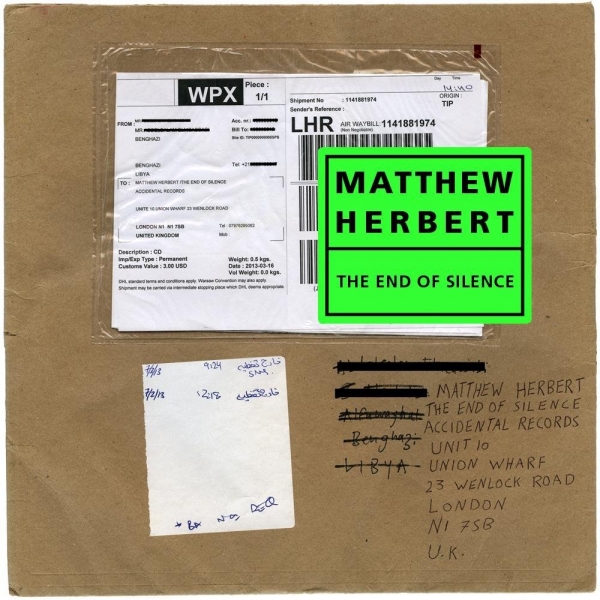 Matthew Herbert really doesn’t like making it easy for himself. Where other electronic musicians rely heavily on the usual instrumentation for their musical compositions, Doctor Rockit looks elsewhere for inspiration: over the years he’s used the sound of manipulated human hair and skin, household objects and the noise of an apple being eaten to make records. The One Club album was created solely from the sounds collected from one night in a German nightclub, while One Pig followed the life cycle of a pig from farm to plate. Yet alongside this he’s made straightforward house and dance music, and something close to traditional jazz with his big band records. He’s a man of contradictions, and a man of many talents.

Herbert also doesn’t shy away from the political or the theoretical; a staunch advocate of using fresh samples and demanding that anything created in the studio can be replicated by a live band, his music addresses the (geo)political, globalisation and climate change, to name but three issues. On his latest project, Herbert seems to be addressing war in the most visceral way possible. The End of Silence is a three-part work composed entirely from a five second recording of renowned war photographer Sebastian Meyer being bombed by Libyan forces while in Ra’s Lanuf in 2011. Herbert has expressed wanting to “press pause and get inside the sound”, and in doing so he’s created something that pulls us away from the safety of our sofa or computer screen, and closer to the horrors of war and combat. I have to warn you, there are some truly terrifying and unsettling moments to be found on this record.

‘Part One’ begins with the bare sound recording: the noise of a distant aircraft is punctuated by a frantic and shrill whistle, then shouts, before the explosion hits. What follows is instant silence, and then various sounds start to appear. Herbert and his band (Yann Seznec, Tom Skinner and Sam Beste) took the samples and recreated them on live instruments (remember, this is something that has to be played live); what sounds like birdsong then appears, like the calm after the sudden storm, or someone’s pressed reset and we’ve been thrown back to a point before all this began. Then there’s clicks and cycles, the sound of wheels turning, the distant tap-tap of (possibly) gunfire, all acting as rudimentary rhythms for this unique jazz quartet. The sounds fade away into almost nothing at a number of points across the first part, before the twelve minute mark brings a series of sinister screeches and garbled voices – then, the whistles and warning shouts appear again from nowhere and the explosion returns louder, more terrifying and heart-stoppingly huge than before. It’s accompanied by funereal church bell chimes…and then at three-minute intervals the bomb repeats, getting louder and louder each time, amplifying the horror experienced by Meyer and the people at Ra’s Lanuf before the track fades to silence.

‘Part Two’ is chilling, full stop. At ten minutes it’s the shortest part of the three, but it’s the most intense with the opening birdsong blown apart by stuttering, gut-wrenching machine noise and the sound of the bomb hitting looped over until it feels like you’re living inside one continuous explosion, forever surrounded by debris and fire. Juddering beats, like deconstructed hip hop or feral drum and bass music, take over, accompanied by discordant synth noise and machine gun pulses – it’s actually dance music, somewhere deep down below the aural assault, but not something you’d ever want to dance to.

‘Part 3′ is industrial music; like a Dario Argento horror soundtrack gone ever so wrong, it’s a slow attack on the senses and feels as if time has slowed down. Perhaps this is what Meyer felt as he realised the bomb was about to hit: time slowed, yet still never enough to escape the experience of being bombed. Beats hit seemingly randomly across the running time, falling about the listener in surround sound. This final part ends with the bomb hitting for one last time; the build-up is the sound of it incoming, over and over again before we begin as we started – a whistle, a shout, then impact. The End of Silence ends with the beginning of silence.

If Matthew Herbert’s aim was to take us with him as he wandered inside the sound of the bomb’s impact, then he’s absolutely succeeded. As much as this can be seen as a political comment on the Libyan conflict, and how it could equally have taken place amidst the horrors of the ongoing Syrian conflict, this is all about human experiences. Most of us will thankfully never experience what it’s like to be near a bomb exploding, or to come under attack in such a manner, but Herbert’s deconstruction and reconstruction of a five second moment which probably changed inexorably the lives of many people in Ra’s Lanuf – and will forever be part of Sebastian Meyer’s life – allows us in some small way to experience the chaos, destruction, confusion, heat, power and horror of modern warfare. It tells more of a story than rolling news coverage ever could, and for that The End of Silence is as close as I’d ever want to get to real conflict.