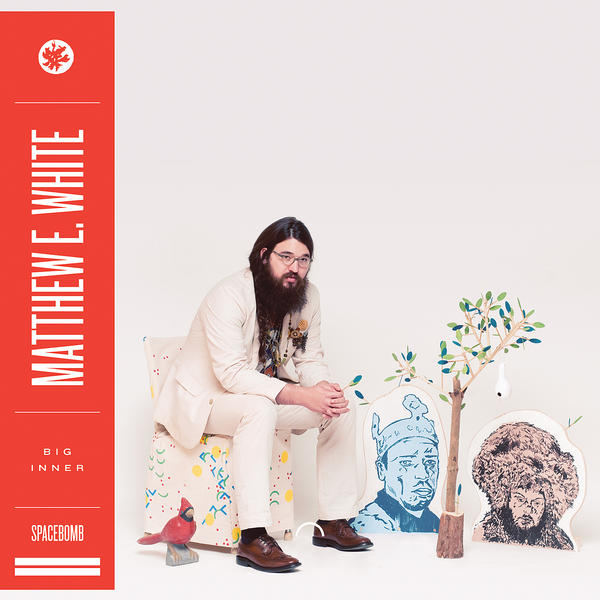 In the world of Virginian Matthew E White it’s permanently the mid-1970s. Round at his studio Randy Newman sits, shooting the breeze with a couple of grizzled jazzbos, while over in the other corner Al Green talks arrangements with the Memphis Horns. At least, that’s the image conjured by the music on White’s debut album, Big Inner. The reality is that White, along with his label Spacebomb, has created the 21st century equivalent of the in-house label band, and at the same time produced a brilliant blueprint for future success.

An arranger by trade and a student of jazz, the aim of White and the others behind Spacebomb was to have a house band that would be the core, or rhythm section, of all the recordings on the label. Live recording and improv are key, with the talented players free to sketch out their ideas before entering the studio – it’s efficient, you see. While talk of “process” makes the Spacebomb output sound like it might be a bit antiseptic, the evidence of Big Inner disproves that assumption in some style. The music here is soulful, full of funk and passion and played with heart by all involved. White is ably assisted by Pinson Chanselle on drums, and the bass of Cameron Ralston, while he has himself arranged the subtly wonderful horns of Fight the Big Bull and the glorious choir that drops in across the album’s 7 tracks.

At the heart of Big Inner is the spiritual and the religious; not that this is a “God” record as such, more a meditation on how religion interacts with life and love, and how compatible this is with modern living. From the moment that White croons “You give me joy like a fountain down in my soul” on the slowly-unfurling easy funk of opening track ‘One Of These Days’ and follows this by singing of a “sweetest revelation” and “glory days” he’s blurring the lines between love, religion and the spiritual. Aside from this, the revelation even on this opening track is how much of an ear White clearly has for arranging: the horn section is wonderfully subtle and subdued yet pitch perfect, while the strings and choir never overpower the melody. White steps things up on the swirling grooves of ‘Big Love’, powered by bluesy piano riffs and head-nodding clap track, swiftly joined by a gospel backing and Curtis Mayfield-esque guitar licks as he vibes, singing “Girl, I am a barracuda/I am a hurricane, I am a hurricane… live free”. It’s joyous stuff, really it is.

The sweet soul of ‘Will You Love Me’ is reminiscent of the Nashville sound and of one of that state’s bands in particular – Kurt Wagner’s Lambchop. This song wouldn’t sound out of place on Nixon, and it’s probably fair to say that Wagner and White are close to kindred spirits in their quest to recreate bygone sounds in a modern setting. On ‘Gone Away’, a traditional gospel number, White meditates on death and loss while singing that “He will break your kingdom down/He will tear your kingdom down”, the most overtly religious moment on the record so far, and that’s followed by the album’s most overtly Randy Newman moment, ‘Steady Pace’, a track with gloriously cheery piano lines and a chorus that could soundtrack the closing credits of a Pixar movie.

White saves the best for last, though, in the ten minute epic ‘Brazos’: the greatest track The Band never wrote about the body of water known as The River of the Arms of God (which has often appeared in literature and song). White and his crew slow-build from a base of strings and swelling brass (and the consistently excellent drumming of Chanselle) until we hit a stunning five minute outro where he and the choir repeat the mantra “Jesus Christ is our Lord/Jesus Christ he is our friend” while another backing chants “Jesus gonna cross the Brazos” until the bone-shaking horn section fades away and all we’re left with is silence.

In the end, whether we find peace in love or God (or both) is irrelevant; the music on Big Inner is so wondrous that it seems entirely obvious that we’ll always find that peace, joy and contentment in music rather than anywhere else. Reading the classics will never guarantee making a classic album, but Matthew E White is one certainly one student that’s just joined the masters.