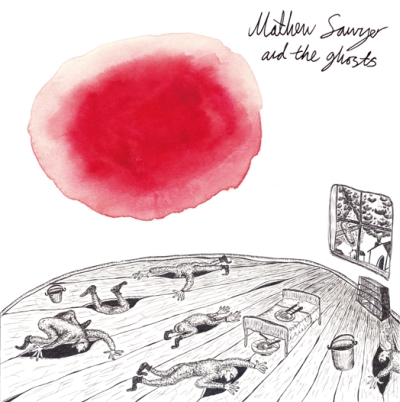 Having stumbled upon Mathew Sawyer and The Ghosts on a quite Monday night on Brick Lane several years ago, I was immediately struck by beautifully subtle melodies that were both riddled with melancholy and laughter. It was the gently lulling guitar strums of songs like ‘Paris in The Spring’ accompanied Mathew’s unusually nasal voice that particularly lingered in my memory. Since their debut release in 2007 tracks from Blue Birds Blood have constantly occupied various playlists of mine, from the innocent lo-fi harmonies of ‘Penny Falls’ to the poppier ‘Go Out On The Streets’. Such a collection of honest daydreaming songs means that How Snakes Eat has a lot to live up to.

Not one to disappoint, ‘Myna Bird Calls’ opens the album in grand sweeping style as the constantly looping guitar strums roll in accompanied by a bellowing cello and Sawyer’s quivering vocals. An accomplished songwriter, Sawyer’s lyrics attempt to be nothing more than they are, reflecting the honest and humble emotions of humanity. And as ‘Diamonds’ menacing staccato guitar howls Sawyer moves away from the simplistic lo-fi approach of his debut and in his own subtle way pushes onto pastures new. A song of lost love Sawyer sings, “It will only ever hurt without you” as violin strings saw softly above contrasting sharply with the brashness of the guitar and the almost post-rock musings of the repetition of the word “love” in the bridge.

‘Revenge of The Extra From Zulu’ takes a step back to that breath taking sincerity of ‘Paris in The Spring’, combining an uplifting cacophony of chimes, keys and whistles with a deep sigh of regret and bitterness: “Tore a map into two/ To make a jigsaw for you/ Showed the way to my heart/ You fucked the directions”. About halfway through the song the framework changes entirely, making you release that, (if you didn’t already), Mathew Sawyer is as much an artists as he is a musician, taking us into a surreal universe in which he “I poured a glass of milk, in the machine I’d built, out of tissue paper/ They couldn’t stop laughing.”

Including a track call ‘Blue Birds Blood’, possibly the most stunning minimalist and haunting track of the entire album, How Snakes Eat recognises its past efforts as it candidly, and gently peeks its head around the next musical corner.