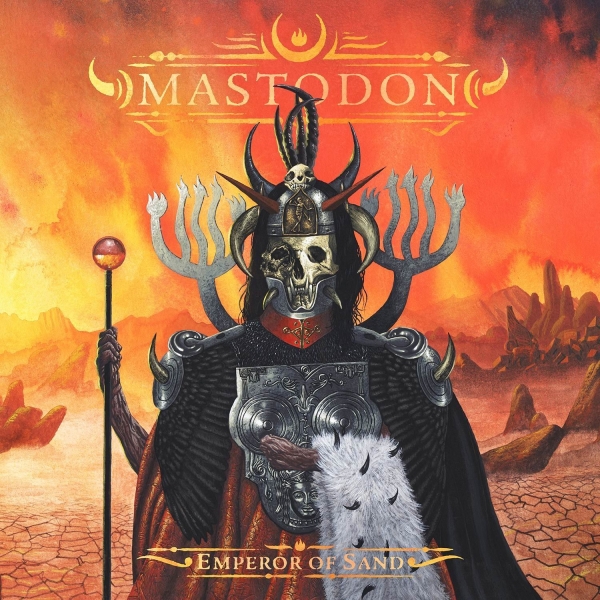 Over the last 15 years, Mastodon have earned themselves a reputation as one of the most cerebral and creative metal bands of a generation.

Their first four albums were virtuosic prog epics that explored the subjects of death by fire, white whales, mountains and astral travel. Few bands would consider embracing simplicity as pushing themselves out of their comfort zone. Yet stripping down for 2011's The Hunter and 2014's Once More ‘Round The Sun was the band's most surprising move yet, eschewing convoluted concepts for punchy, straight-to-the jugular song writing. Yet it always seemed the wrong route for a band so clearly in thrall to experimentation. It comes as no surprise then that for their seventh album Emperor of Sand, Mastodon have returned to fantastical concepts … and to their comfort zone.

This time however, the band's storytelling is anchored in the dark reality of personal tragedy, packing a real emotional weight to the gut. Just as recording began, bassist and vocalist Troy Sanders’ wife was diagnosed with cancer, while guitarist Bill Kelliher had recently lost his mother, also to the disease. Emperor of Sand tells of a protagonist who is handed a death sentence by "a desert-like version of the Grim Reaper," according to drummer and lyricist Brann Dailor, and exiled to wander a barren, dusty wasteland as a deadly sun beats down on him. It’s a metaphor for both cancer and chemotherapy.

Sonically, the majority of Emperor of Sand falls between the huge slab-like riffs of The Hunter and Leviathan’s multipart thrash. Lead single "Show Yourself", with its punchy chorus, is the album’s "pop" moment, but like the other tracks here, it's weighty and seeped in steely-eyed grit and complex instrumentation. Opening track "Sultans’s Curse" explodes with a muscular sludge riff reminiscent of "Black Tongue", immediately the most satisfyingly heavy Mastodon have sounded in years. "Precious Stones" follows suit, a many-faced beast that revolves between monolithic sludge and vintage 70s prog. "Steambreather" slithers on its underbelly across a cracked and arid ground while "Andromeda" is a nightmarish track, all roaring vocals and crashing riffs.

As polyrhythms clash heads with screaming solos, Mastodon sound powerful and in their element. Underneath it all however, there’s a sense of urgency rising under the surface, and something new, an inherent fear we wouldn’t usually associate with metal’s fiercest barbarians. Most palpable is the realisation that our time on Earth is finite, a message that the band ponder again and again in their lyrics: “Don’t waste your time, don’t let it slip away” ("Precious Stones") “Live your life, so I can breathe” ("Clandestiny"), "Time watching as sand flows through glass,” ("Andromena").

The burning desert the band have conjured represents the shifting sands of time and into that landscape, they’ve poured every drop of their anger, grief and fear. In that sense, while Emperor of Sand is amongst their heaviest, proggiest material to date, it’s also the quartet at their most emotionally bare. Mastodon have dug deep into their darkest moments and have surfaced with one of the best albums of their career.