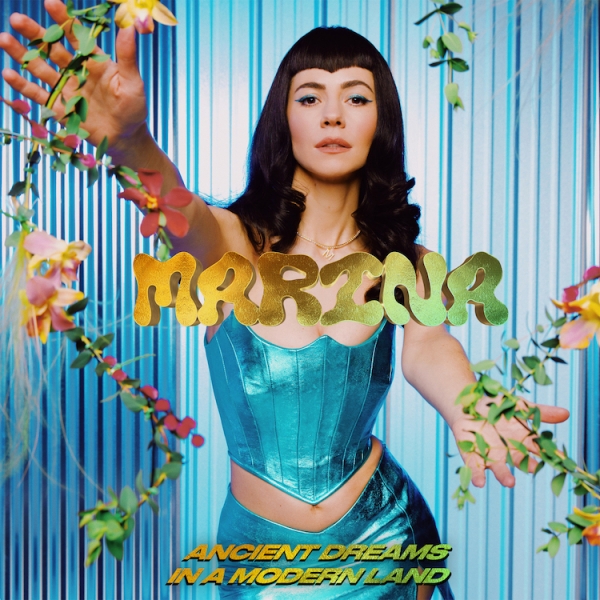 Harking back to 2010’s The Family Jewels, MARINA’s self-penned Ancient Dreams In A Modern Land does away with the lowest common denominator electro inflections that marred her last full-length body of work.

The result reads more like a follow-up to the personal Froot (2015) than it does the collaborative Love + Fear, and finds MARINA emboldening her trademark theatrical glam with sharper edges.

A whirlwind of an opening, and also setting the tone for the albums first half, the title track is a re-actualization of Muse’s "Uprising" - sharing thunderous percussion and a sense of urgency with the former. MARINA’s voice soars across a rambunctious bass line, her angelic soprano launching into orbit as she senses the advent of a revolution. A sense of hard-earned confidence rises to the surface: the ebullience of the first track and the fruits of its introspection are echoed in the second, a sassy self-empowerment call to arms that only grows more hectic with time. “Why be a wallflower when you can be a Venus flytrap?”, MARINA ponders in jest.

Her vocal dynamism translates particularly well in rock-leaning settings, where her leaping registers make their way through enthralling kicks and mean guitar riffs. She flies across second single “Purge The Poison”, confronting turbulence with ease and getting her every word in despite the constant menace of being overthrown by an instrumental neurosis.

It’s precisely those moments of maximalism across Ancient Dreams that glue the collection of tracks together. The relentless "New America" is the hymn of a country ready to confront its demons: anthemic and critical at the same time, it pushes the idea that the social reckonings of last year should amount to more accountability and action at a systemic level. MARINA spells the end of an era of willful naivete: “America, you can’t bury the truth / It’s time to pay your dues”.

Despite a relatively short runtime two distinct albums seem to be vying for the listener’s attention: a socio-politically charged alternative pop rock epic on one side and a more tender intimate narrative following heartbreak on the other. It's the ballads of Ancient Dreams that bear the brunt of this slight schizophrenia. "Highly Emotional People" might be rooted in a specific past relationship with Clean Bandit’s Jack Patterson but it’s hard not to hear it as a broader statement about masculinity, even more so considering the track’s placement–wedged in between the intense "Purge The Poison" and "New America". There’s a disheartening simplicity in lyrics like “people say men don’t cry” that only scratch the surface of a topic that’s become a touchstone of popular culture.

But, some good comes from personal musings getting turned into grander ideas - whether intentional or not. Pandora becomes a feminist icon, reclaiming control over her own fate in "Pandora’s Box". The ancestral representative of the world’s woes transcends the misogyny of the original myth into a symbol of power and independence in MARINA’s hands. The track proves that somewhere amongst the ruins of Ancient Dreams lies a path to merging the album’s twin souls into one.