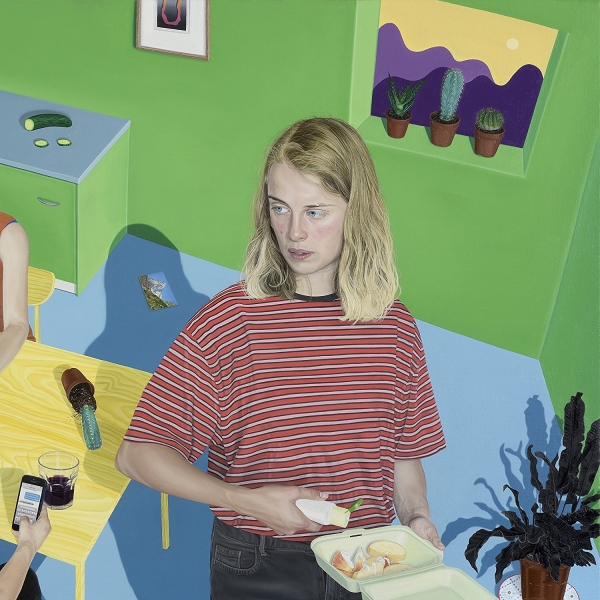 With the release of debut album We Slept At Last, Marika Hackman found herself pigeonholed with the likes of Laura Marling and Johnny Flynn. Perhaps it was just convenience that led many to label her that way, but she was always more than that.

The fact that We Slept At Last was so different from Marling and Flynn’s records, despite her being cast in their shadow, showed as much. Though it perhaps lacked confidence, it was a uniquely subtle album that packed a punch when it wanted to. I’m Not Your Man, then, is Hackman thoroughly shaking off those labels to truly show us what many missed the first time around.

With the release of lead single “Boyfriend”, it became abundantly clear that that Marika Hackman was no more, and a more confident, punchy Marika Hackman had taken her place. Gone are the melancholic acoustic guitars, sparse synths and veiled lyrics, replaced by raucous riffs that loop and spiral like party streamers and that cheeky chorus alluding to the “boyfriend” feeling slightly more confident in his sexual ability than he should be.

I’m Not Your Man is, at times, a Marika Hackman that is almost unrecognisable and it’s exciting. She’s more open and frank, discarding the metaphors in favour of the straight-talking lyrics, accompanied by a more feral and energetic sound. As a result, tracks like “Violet” sweep you up in its passion. There are no veiled lyrics about sex here, this is the sweaty intensity of bedroom fumbling writ large.

“So Long” (a track that worryingly has a touch of Crazy Town’s “Butterfly” to the opening guitars) charts the anxieties and second-guessing that comes with any whirlwind romance. If the girl of “Boyfriend” is likely to cheat, thus bringing forth this relationship, then they’re probably going to do it again, right?

The closest I’m Not Your Man gets to We Slept At Last is the quietly reflective “Cigarette”. Here the legwork is done solely by Marika’s almost whisper-like vocals, with an acoustic guitar and ghostly backing vocals bringing up the rear. It’s simple yet powerful. The lyrics are stark and emotional, outlining an argument in a car park as the cracks start to show: “Something to talk about, rather than fuck and shout / Maybe we could go to sleep.”

In fact, the whole album deftly follows the narrative of a fiery relationship; from that initial clandestine relationship to the bit where you never want to leave the bedroom until it all starts to break down as arguments become more frequent. It’s a whirlwind from start to finish that’s so easy to get caught up in, much like the relationship itself. This feeling of chaos and passioned is captures in a big way with the help of The Big Moon, who serve as backing band throughout, giving the whole album a richer sound.

Drafting in The Big Moon has, possibly subconsciously, shaped the end product. From the yelps of laughter that open the album on “Boyfriend” to those little spontaneous moments caught on the mic during recording left in, I’m Not Your Man shares much of that “rough and ready” DNA that made Love In The 4th Dimension so special.

“Time’s Been Reckless” would not sound out of place with The Big Moon’s name slapped on it, with an utterly infectious sing-along chorus, but this is still Marika Hackman’s baby. They never overshadow her, simply giving her that leg up to reach those heights she wants to reach.

Her new found confidence comes through in spades here and the end product is a record that shines with a captivating vibrancy. Often mislabeled and perhaps underestimated, Marika uses I’m Not Your Man to break out of that pigeonhole she was put into with gusto.

Whether it’s the cheeky raucous sound of tracks like “Boyfriend” and “Good Intentions” or the gorgeously contemplatives ones like “I’d Rather Be With Them”, this is a true statement of intent. This is the Marika Hackman she wanted us all to see and it’s one you should readily welcome with open arms.