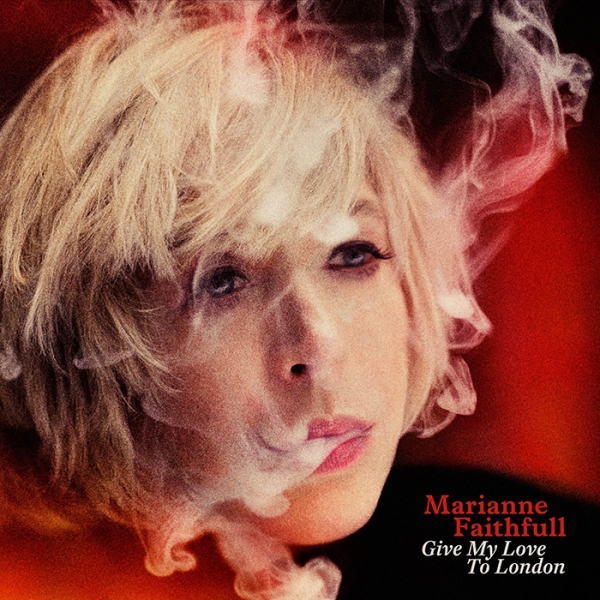 Marianne Faithfull is a name synonymous with another time, one associated primarily with the libertine Swinging Sixties and its darker underbelly of sex, hard drugs and subversion, something that ensured fame and notoriety came her way in equal measure.

Whilst it now stretches across a full five decades, Faithfull’s recording career seems to be also forever locked in the past. Be it the quaint orchestral pop of her 1960’s nascence or the anger and ravaged self-destruction from which her 1979 masterpiece Broken English emerged, these are almost always the musical barometers by she is measured. With the release of her 20th studio album Give My Love To London, this perspective may be about to change.

For this record Faithfull has put together a red hot studio band, including Portishead guitarist Adrian Utley and English singer-songwriter Ed Harcourt on keyboards, as well as having notable guest appearances from The Bad Seeds’ veritable Warren Ellis and Jim Sclavunos. And in keeping with all of her albums since 2002’s Kissin Time, Faithfull adopts a largely collaborative approach towards the songwriting. She provides most all of Give My Love To London’s lyrics – a process facilitated, in part, by her immobilisation last year from a broken back – with the music coming courtesy of such as Nick Cave, Anna Calvi, Roger Waters, Pat Leonard, Tom McRae and Steve Earle.

Such an illustrious cast does not ensure that everything Faithfull touches turns to gold. “Falling Back” veers uncomfortably close to radio-friendly, Adult Oriented Rock (all the more surprising given that Anna Calvi shares the writing credits), and “Mother Wolf” is a fairly unremarkable, plodding rocker that even Ellis’s insistent viola hook cannot fully salvage. But when the creative unions properly coalesce, they do so with some pretty startling results.

The opening title song – Faithfull’s deeply sardonic paean to London; the erstwhile home town from which she had dramatically fallen out of love – is cast against a familiar Steve Earle backdrop of countrified stomp. The rollicking “I’m Waiting For The Man” piano intro and Utley’s squalling guitar add hope to the inherent sadness of recent single, the Roger Waters-penned “Sparrows Will Sing”, and the stirring combination of Dimitri Tikovoi’s sweeping string arrangement and Warren Ellis’s alto flute on “Deep Water” are strangely redolent of the baroque pop with which Faithfull first made her musical name.

On “Going Home” – co-written by Leonard Cohen and his fellow American songwriter Patrick Leonard – Faithfull’s half-sung half spoken words evoke memories of the sultry Sprechgesang of Marlene Dietrich, something she repeats to mesmerising effect on the album’s closer, a quite remarkable, spectral reading of Hoagy Carmichael’s “I Get Along Without You Very Well”.

But the album’s centrepiece and stand-out track is “Late Victorian Holocaust”, a song specifically written for Faithfull by Nick Cave but which could quite as easily have been swept up off the cutting room floor of his No More Shall We Part. It is one of those magnificent funereal ballads Cave seems able to toss out at will. Charged with Warren Ellis’s plaintive violin, the cracked world-weariness of Marianne Faithfull’s voice imbues the song with real life and contemporary meaning and affirms that Give My Love To London is the album with which she is able to finally reconcile her past and present.