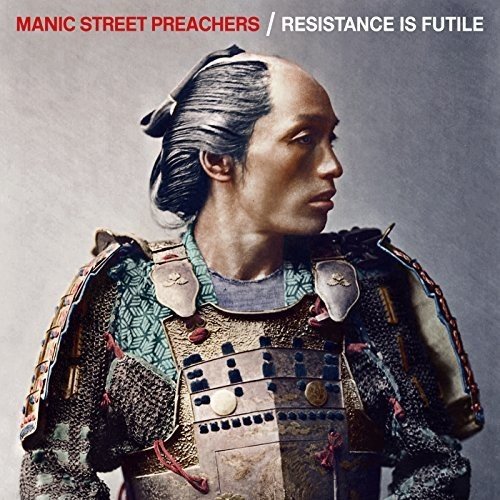 The three decade-long career of Manic Street Preachers can be defined by a series of grandiose statements, made while the band reserved their right to wildly contradict these statements further down the line.

The release of 2010’s Postcards from a Young Man was announced in typically dramatic style as “one last shot at mass communication”; a presumed swansong for the kind of strings-embellished anthemic rock that has been the group’s backbone since the disappearance of lyricist Richey Edwards in 1995, and the subsequent ubiquity and commercial success of the following year’s Everything Must Go. Resistance is Futile - the group’s 13th studio album - is the inevitable about-turn; a record that returns to the Manics 2.0 default, but that is still intriguing for the esoteric subject matter delivered by its deceptively straightforward aesthetics.

The release follows the established rhythm of their discography, where more sonically experimental and/or high concept records are followed by a reset - broadly, the populist following the obtuse. The “mass communication” (more realistically, the workmanlike slog) of Postcards from a Young Man was followed by two very different records: the pastoral introspection of Rewind the Film, and the European art rock-influenced Futurology. Resistance is a better record than Postcards: this is due in part to the undeniable higher quality of the songwriting, but also because it is thoughtfully informed by the idiosyncrasies of the two records that preceded it.

Opener “People Give In” sets the mood: An ode to defeatism that is a microcosm of the Manics’ latter day outlook: cynicism with a last-minute plot-twist of hope. It could also be read as an attempt to transpose the understated surrender of Rewind the Film from the intensely personal to the universal. Although ultimately too generic to really resonate, exposed by its repetitive structure - “people break down/people move on/people get cold” and so on, and so on - it’s interesting to see this outlook developed and turned outwards.

The next two songs are shining examples of the Manics’ almost supernatural flair for hook and melody: Lead single “International Blue” is a tribute to the painter Yves Klein, packaged like a reprise of 1992’s “Motorcycle Emptiness”. “Distant Colours” swells from brooding, programmed beats to a soaring chorus; encapsulating what lyricist and bassist Nicky Wire has described as the “widescreen melancholia” at the heart of the album. Later in the album, both “Sequels of Forgotten Wars” and “Song for the Sadness” match the expansive synths and European sensibilities of Futurology with unabashedly melodic choruses.

As is customary for a group whose discography has always doubled as a kind of alternative educational syllabus, a handful of tracks on the album take historical, often overlooked lives as their starting point. “Vivian” takes its name from Vivian Maier; a self-taught street photographer whose work was largely unpublished in her lifetime, but who is now heralded as a kind of folk art hero. The song suffers from reducing its hyper-specific subject to platitudes: The chorus (“Oh Vivian / Did you ever understand?”) is almost as corny as the inclusion of a literal camera-winding sound effect over the intro.

Standout track “Dylan and Caitlin” sees James Dean Bradfield and singer songwriter The Anchoress assume the roles of Welsh poet Dylan Thomas and his wife Caitlin, recreating the pair’s excessive relationship in a duet that is a little lyrically on-the-nose (“Love has deserted the pain/The alcohol starts to sink in”) but is delivered beautifully. The group’s frequent duets with female guests - from “Little Baby Nothing” with actor Traci Lords in 1992, to Futurology’s “Europa Geht Durch Mich” with a deadpan Nina Hoss - are often album highlights, demonstrating Nicky Wire’s unusually considered approach to writing from a female perspective.

The second half of the album isn’t as strong, and some tracks - the retro rock of “Broken Algorithms”, the empty “woahs” of “Hold Me Like a Heaven - feel like missteps. But overall Resistance is Futile is an interesting nexus of the Manics’ twin ambitions towards populism and complexity - and an encouraging sign that they are still progressing after over 30 years.