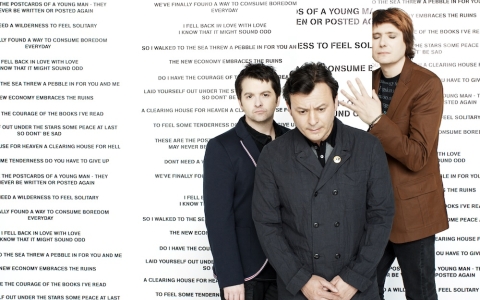 Two thirds of the way through Postcards From a Young Man, James Dean Bradfield sings: “I think I’ve found it / and I think I love it”. We know they’ve been looking, but for Manic Street Preachers to have found it is revelatory; for them to love it is even more so. Surely theirs was to be an endless search, lit only by the grim glamour they could salvage from decay? Clearly something is afoot. Can it be that, especially having promoted their tenth album as “one last shot at mass communication”, the Manics have gone soft after all these years? To quote Trent Reznor, is their “viciousness losing ground”?

The truth is that for all their angry sloganeering, the Manics have always been a pop band. Many of the strategies they employ here, from big choruses to grandiose strings, have been in their playbook almost from their very beginnings. Beneath all of their posturing and propaganda, the band has always possessed a positivity at their core, manifested as a knack for grasping hope from the jaws of their “alienation, boredom and despair” and channelled through a desire to spread those hard-won gains as widely as possible. What is different about Postcards, what makes it the happiest of their records, is that this positive populism is concentrated more densely and uniformly than ever. What makes the record so exciting and vital in addition to this is that the band have still deftly focused their enduring rage through this lens. To put it another way, their fire is still there; it is just brighter – rather than hotter – than before.

After the creative regeneration signalled by their last two albums, the Manics needed another strong set of songs to enter this new phase of their existence. Whilst cousins and longstanding music writing team James Dean Bradfield and Sean Moore have come up with the goods on their end, it is Nicky Wire’s lyrics which soon become etched into the memory most effectively. Given a healthy three year sabbatical by the use of the last of Richey Edwards’ lyrics on last 2009′s Journal for Plague Lovers, Wire has come back with a vengeance – within a few songs, the listener is virtually tripping over lines which are either fascinating in the light of what we know about Manic Street Preachers, fascinating in their own right, or both.

As with so many of the best records, though, it is the way the music amplifies the impact of the words which from which Postcards draws its greatest strength. To do this, all the lighter songs make up for their lack of venom with bombast of a different kind, ‘Some Kind of Nothingness’ incorporates not just a backing choir and strings but a Bradfield and Ian McCulloch duet. Fortunately, the crowded arrangement is handled with care, the adornments augmenting the theme of nostalgia and reassurance to which McCulloch is ideally suited. Later, ‘Golden Platitudes’ arguably makes good on a long-hinted-at Beatles attachment, its solemn piano opening and title recalling ‘Golden Slumbers’ from Abbey Road. Over the returning choir at its climax, Bradfield serenely asks “why colonise the moon / when every different kind of desperation exists?”, the band’s clearest allusive dig for a while at mankind’s misplaced priorities.

Many of the heaviest tracks are focused towards the album’s conclusion. ‘A Billion Balconies Facing the Sun’ drafts Duff McKagan in for bass duties on perhaps the album’s brashest song, its pounding drums and histrionic solo reserved to accompany Wire’s excoriation of modern self-absorption via technology, not least television, “the perfect antidote to camouflage our screams”. It’s a theme the band return to on the raw and rocking closer, which borrows Google’s unofficial motto for its title – ‘Don’t Be Evil’ – but which denounces self-importance and the pretense that “technology made us equal”.

The band have taken great pains to emphasise the fact that Postcards From a Young Man was never intended as a direct sequel to the last album, that it is no Journal For Plague Lovers Part II. Without doubt that much rings true in the music here – however, the two albums can be seen in each others’ context as a kind of contrasting pair. Surely it’s possible that the juxtaposition of two stationery-based titles was not coincidental? Where Journal was a hefty tome weighed down by Edwards’ memory and his many cultural allusions, Postcards is generally lighter and more personal, its songs like witty missives from abroad.

Postcards From a Young Man is a wonderful album; the sound of a band practically bursting with justified confidence in themselves and in their songs. Where their previous work often seared, this album instead glows. It can be a subtle difference, but as the Manics’ work has always divided their fans into two camps (however defined), it will mean that some will prefer the more raw fury of past glories, whilst some will revel in this renewed pop direction. Either way, there is a great deal to love about Postcards From a Young Man, in all its exuberance and bombast. They may not yet mean “everything to everyone” but once again Manic Street Preachers have crafted a tremendous rock record and an essential listen. Time will tell if this is their last – in 1992 their first album was meant to be, remember – but this is a shot at mass communication which deserves to be heard.