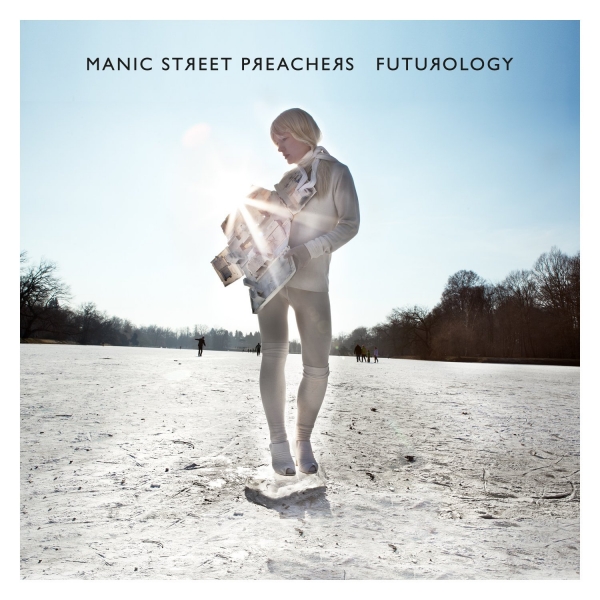 The future has always been a concern for Manic Street Preachers. In the last few years, they’ve notched up three songs on the subject, the titles of which – “So Much for the Future”, “Love Letter to the Future”, “The Future Has Been Here 4Ever” – in typically less-than-subtle Nicky Wire fashion, speak for themselves. Futurology was announced as the next phase of the band’s grand three-year plan while they were doing the rounds for last year’s Rewind the Film (keywords: reflective, acoustic, organic, Welsh). The notion of a new Manics album that could be described as “post punk disco rock,” with a continental, motorik slant? Well, for all the anticipation that drummed up within the band’s die-hard fanbase, you may as well have listened to Rewind the Film with the volume at zero until its follow-up emerged.

Yet, the only thing that separates the two albums is their concepts. Futurology and Rewind… came out of the same sessions at the same studios with the same producers. So while there’s precious little you heard last year that could fit in here, there are moments where you can’t help but think that some elements of Futurology were tailored purely to work around this grand conceptual two-album folly. “Divine Youth”, a duet with Welsh chanteuse Georgia Ruth, could have been truly gorgeous – a gentle ballad, littered with harps, it would have made for a real highlight to Rewind. Sandwiched between two of the most forward-thinking tracks on Futurology, it’s been produced within a sterile inch of its digital life, and interspersed with some ghastly stabbing strings, last heard somewhere around 1986. Meanwhile, the lamentable chorus of “Misguided Missile” (“I am the sturm und drang! I am the schadenfreude!”) seems to work purely as a clumsy way to keep the concept going, man, with little thought to creating any actual substance to the lyrics.

“We’ll come back one day,” Nicky Wire sings on the opening title track’s relentless chorus, “we never really went away.” And, really, only Wire could sing a line like that - and so close to the last album, too - in a song that anthemic. Coming out of James Dean Bradfield’s mouth, there’d be too much triumph, too little resignation. He’s much better suited to the likes of “The Next Jet to Leave Moscow”, one of the few truly Krautrocking things here - minimal and motorik to a fault - on which you can almost hear Bradfield smirking as he imagines “an old jaded Commie” asking him about his band’s accomplishments. “I hear you played in Cuba - did you like it, brother? I bet you felt proud, you silly little fucker.” And, of course, there’s “Sex, Power, Love and Money”, a glammed-up disco stomp, which completes the (invented-by-me) trilogy started by “The Girl Who Wanted to Be God” and “Miss Europa Disco Dancer”. Sure, the lyric about “uploading your future and downloading your past” is almost unbearably embarrassing, and Wire’s shout of “RECESSION!” seems to date the song by about five years already, but it’s been a long time since the band have sounded like they’re having this much fun. “Show Me the Wonder” this is not.

By now, you’ve probably heard about Futurology’s reference points – Neu!, Cluster, PiL, The Skids. And Simple Minds - lots of Simple Minds. Simple Minds are a band I’ve only recently had the pleasure of experiencing properly for the first time, but hearing their earlier work turns Futurology into something of a roman à clef – a bracing game of spot the reference. “Europa Geht Durch Mich”, a duet with German actor Nina Hoss, is a total grab-bag, welding a sinister glittermarch from Sean Moore to JDB’s coldest vocals since The H*ly B*ble. It’s Empires and Dance, minus the dance - or, more specifically, “I Travel” with the funk sapped out of it, right down to cribbing its wonderful opening line – “Europe had a language problem”. The difference, of course, being that when Simple Minds wrote it, they were 21. Manic Street Preachers are 45. Let’s call it an old career in a new town.

With that in mind, “Dreaming a City (Hugheskova)” is Manic Street Preachers’ theme for “Theme for Great Cities”. It opens with a colossal bass riff that’s part dub, part Derek Forbes, part “Immigrant Song”, which underpins a synth line that would have felt right at home on Low. Now imagine the song as a Wim Wenders film - Wire and Moore are pushing a rickety train along some deserted tracks in some desolate part of continental Europe. Slow pan up to some fucking mountain or something and there’s James Dean Bradfield, wringing this brief, monumentally anthemic guitar riff - little more than a cameo, really. Pan back down to the tracks, and the train’s running perfectly, with Nicky and Sean comfortably sat inside. Sean’s on his iPad, Wire’s reading…I dunno, Kafka or whatever. Everything as it should be.

Pretentious? Of course, but how could I not be? But every promise the band made on this album is packed into this song’s five minutes and, for a band whose existence has always been predicated on the balance between genius and fiasco, to hear them get it this right is impossibly thrilling.

“We could have been heroes,” James Dean Bradfield sings on ‘Sex, Power, Love and Money’, “but failure’s more fun.” There’s no better manifesto for the band’s post-millennial career than that, and Futurology just happens to be their most daring folly yet.