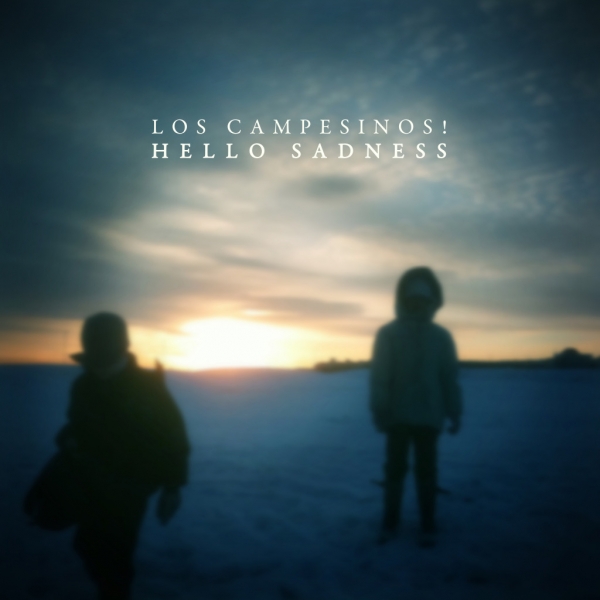 Oh Los Campesinos! you are frustrating sometimes, with your patent talent distorted by your oft unorthodox ways. Although you’re likely to not want to hear this, you kinda remind me of a certain Premiership footballer with your Woe Is Me witticisms, cocksure declarations and innate ability to split opinion. You do make things difficult for yourself. When it comes down to it though, it’s still pretty bloody hard to dislike you. On Hello Sadness, however, it seems like the band’s most controversial days are behind them, as they thrive alongside their new summer signings and hurtle towards the very peak of their career.

The most noticeable change on here – their fourth record to date – is the absence of the hyperactivity that featured on their first album and which has haunted the group with the now-misplaced label of “twee” ever since. They sound infinitely less like yelping students and more like adults articulating complex emotions. Though the album is chock full of glaring contradictions, it is their most emotional but is shorn of sledgehammer maximalist noise. It’s shorter than Romance is Boring but feels far more complete, as well as being their most accessible album so far, yet lyrically one of their bleakest.

Really it’s the album’s coherence amidst this complex nature which makes it a success. But that doesn’t mean that individual highlights aren’t abundant – the reverse is in fact true. ‘Baby I Got The Death Rattle’ feels like a culmination of their noise-pop tendencies; frantic and messy but perfectly coiled, and likely to be a bit of an anthem live (it has been well-picked as the closer on their current tour). Gareth’s words are spat like blood from pulling out his own teeth for the most part but the self reflexive wit isn’t lost on lyrics like “You are an angel/that’s why you pray/I am an ass and that’s why I bray” – that’s right, just a bit of donkey humour there. Not often you find that in indie-pop, is it? No big deal.

The title track is a perfect slice of euphoric indie pop, and whilst it might not be their loudest it is their most effective climax to date, lithely sliding into a massive wall of guitars and fluttering strings amidst crashing cymbals. It could very well be the group’s own anthem. In that number, and the one a few tracks down – ‘To Tundra’, they have two of their best songs nestled here. The latter epitomises their new maturity, a softer track which wallows in the misery before gradually spiralling into properly grand territory without any contrivance and carrying some real gut punch emotional heft. Majestic is not something you could have really called LC! in the past, but it sums up ‘To Tundra’ quite nicely.

Gareth’s lingering penchant for smut amidst such majesty really grounds the songs in the real world though. The most cutting examples here being the devastatingly intimate “sound of your pissing through the thin walls or stroking your hair” (‘Light Leaves, Dark Sees Pt II’). Though on ‘…Death Rattle’ there’s an indication that the band are maybe growing tired of a brattish cheeky persona, keen to be taken seriously as he falls short on “tied to my bed, where you spent all night giving… oh you get the message”. Also things never get too loud, voices are never properly raised, beyond the opening track tempers barely fray and in some ways this makes it their most introverted album yet. Previously the lyrics were often too much, both syllabically and informatively and it felt like everything was a vehicle for those oh so clever observations, which sometimes they were, but here it’s a relief to find the lyrics constrained by the music rather than vice versa.

So far, so gushing. It’s not perfect though. ‘The Black Bird, the Dark Slope’ stands out like a sore thumb and throws off the momentum a bit, not to mention it being a metaphor gutted for much more than it’s worth. ‘Hate for the Island’ is pretty sweet but far shorter than it should be. ‘Light Leaves…’ seems to be engineered as some kind of grande finale but fails to have the impact it seeks. And of course there are still the odd lyrics to make you cringe i.e “I always made her purr like a cat” (‘Songs About Your Girlfriend’) or “we were kissing for hours with her hands down my trousers” (‘By Your Hand’). C’mon guys, overshare alert.

Some things are regarded to be richer for their imperfections. This is often said of songs but rarely of bands themselves. Los Campesinos! though, might just be. With Hello Sadness the group have grown into themselves and crafted a measured and mature record without compromising their personality. They’re still a bit melodramatic, but this is easier to like than much of their previous output and, love em or hate em, I think it is proof that they have potential to be one of the best British bands of their generation.