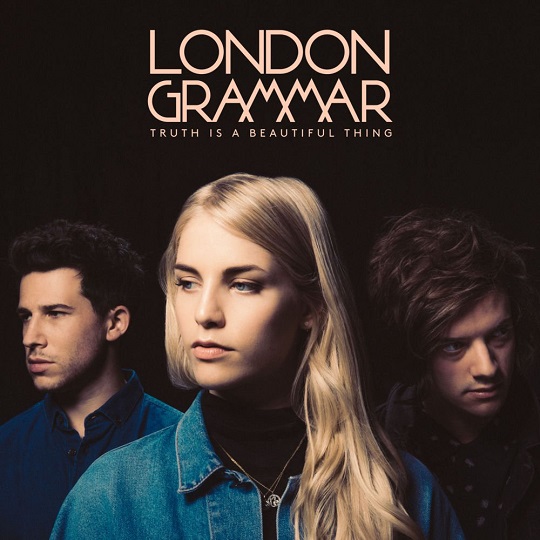 Writing the follow up to a successful debut album presents artists with the decision of whether to stick or twist. Should they change what people loved about them in the first place or keep to the path they’ve created?

Both choices have seen many suffer from the dreaded ‘second album syndrome’, succumbing to either misguided reinventions or the law of diminishing returns. With Truth is a Beautiful Thing, the follow-up to 2013s If You Wait, London Grammar have done neither of those things. The accent is on evolution, not revolution, retaining the grace of their debut and adding subtle new colours to their palette in the process.

If the involvement of heavyweight producers Greg Kurstin, Jon Hopkins and Paul Epworth prompted thoughts that their second record would have the kitchen sink thrown into the production mix, such concerns are allayed with the opening “Rooting For You”. Released on New Year’s Eve, its solemnity was a fitting closure to the annus horribilis of 2016 and eased 2017 in with a semblance of optimism.

The opening line “Let winter break, let it burn until I see you again” encapsulates the blend of hope and yearning which London Grammar excel at. Elsewhere the lyrics still possess an inherent melancholy, yet never stray into wallowing, the line “I'd move the earth, but nothing made you want me better / There is nothing I can do but steal the moon” from “Oh Woman Oh Man” is especially poignant.

If You Wait prompted comparisons with trip-hop but its real strength was founded on London Grammar’s sense of songcraft, that saw them winning the Ivor Novello award for song of the year with “Strong.” An equally assured focus on songwriting is at play here, layered with more ambitious arrangements that revel in minimalism. “Leave The War With Me” combines beautifully subtle interplay between Dan Rothman’s guitar and Dot Major’s drums and keyboards which creates room for Hannah Reid’s voice, that sounds both careworn and protective, to soar over the top.

“Hell To The Liars” is a lovely slow build, carefully and assiduously arranged, as Reid’s voice stretches words over notes, underpinned by a hushed string arrangement. String sections are often thrown onto records at the expense of intricacy, but here they add a lustrousness that embellishes rather than submerges the song.

There are moments that don’t hit the heights, “Non Believer” is built around a tremendous chorus yet the verse doesn’t quite take off and the addition of a vocoder feels unnecessary given the quality of Reid’s singing. Whereas the vocal effects on “Metal and Dust” added to the technicolour maelstrom of the outro, here it’s the one time they sound over-produced.

It proves to be a minor slip, the following “Bones of Ribbon” is subtly anthemic, built on a repeated drum pattern with the verse providing a fluid build to the chorus, which is signified by a slight tweak in the vocal melody, with the guitar and keyboard motifs adding a deft texture.

As well as exploring matters of the heart, the lyrics make several references to escape. On “Wild Eyed” Reid sings “I am safe with you, far away from here” and the closing title track returns to the theme, “Hide you somewhere they don’t know…” ushering the record out where it began with understated elegance. Lyrically it’s a tale of redemption at the end of a long road travelled, perhaps a reference to the near four-year gap since their debut.

With Truth is a Beautiful Thing London Grammar have created a world that knows when to be expansive and when to be introspective, building on their DNA and adding more dextrous, yet suitably restrained arrangements. It shows second albums don’t have to be disappointments, that artists can continue walk their own rarefied path and in the process get better the further down the road they get.