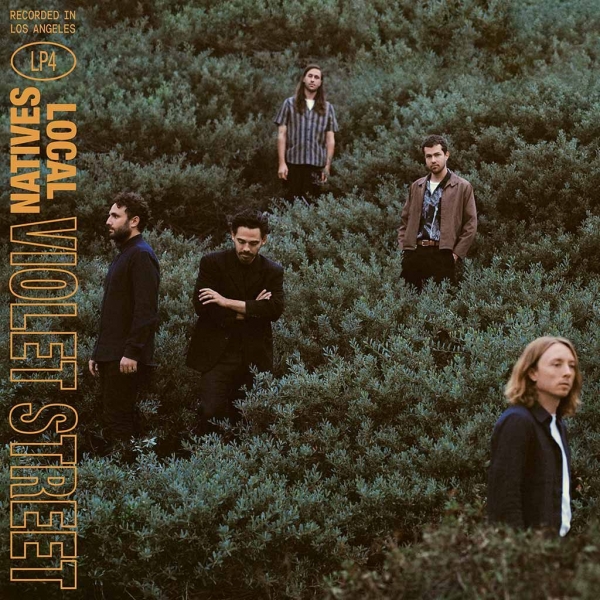 Sometimes you just need to hit the reset button.

That’s effectively what Local Natives have done on their fourth album Violet Street. Their 2009 debut Gorilla Manor, named after the house they all shared while writing the album, reflected their then lively and boisterous surroundings. It also put their gorgeous three-part harmonies – instantly becoming the band’s calling card – front and centre. Their 2013 follow-up Hummingbird was a much different affair. Veiled and shrouded in a sombre dusk, brought on by bassist Andy Hamm departing the group, and lead vocalist Kelcey Ayer’s mother’s passing, the set of songs were utterly beautiful, full of sorrow and mourning. All of a sudden this five-piece that were so bright-eyed and rowdy only a few years ago had grown up and matured, and were writing some of the finest songs, brimming with emotion.

Then they released their third album, Sunlit Youth, in 2016. But something didn’t seem quite right. The intricate vocal harmonies weren’t there, and nor was the accomplished song writing. Instead, there were catchy, hollow, sing-it-at-the-top-of-your-lungs hooks, and songs were diluted and thin. With the exception of one or two moments, it felt as if Local Natives took a step in the wrong direction, that they were trying to force themselves into a mould they didn’t suit, and lost much of their essence and character by doing so. It left many a Local Natives fan, those that have been there from the beginning, fear the worst: that those gorgeous three-part harmonies and that thoughtful song writing might never be heard again.

But with your first steps onto Violet Street, fears are allayed immediately. The symphonic, beat-less opener “Vogue” sets the scene. Strings and pianos cascade all round like perfect little drops of rain, as Ayer’s falsetto takes to the skies. Not long after, the strings reappear on lead single “Café Amarillo”, a reflective, shaded number, with the group’s trademark harmonies resplendent and crystalline. They give anxious thoughts like “I don’t wanna die before I learn to live” an eerie beauty; the kind of thoughts that are peppered throughout the album – the worry of “how long can I ask you to wait” in the mellow, quivering “Someday Now”, the despair that “everything was easier before” in “Tap Dancer”, a delicate, melancholy ballad.

Their existential quandaries manifest themselves in brighter, more buoyant moments too. Second single “When Am I Gonna Lose You” – its title saying it all – bounces with a propulsive energy, layered vocals colouring the verses before it unfurls into a glittering chorus. On “Megaton Mile”, it’s “darkest after dawn”, yet it flutters on a warm breeze, and shines radiantly. Elsewhere, “Shy” puts drummer Matt Frazier’s percussive prowess in the spotlight, with machine-gun like snares blasting through huge punches of synths and brass on its back-half, and “Gulf Shores” is the biggest song Local Natives have ever written, eclipsing anything before it, with its firework explosion of a chorus, and the stunning, intricate vocal tapestry that ushers in a grand, triumphant outro.

For their fourth album, Local Natives have tapped back into the rich veins of sound from their first and second albums, taken the best elements of each – the spark of Gorilla Manor, the moodiness of Hummingbird – and used them as the foundation to build Violet Street. It’s a dramatic stretch on life’s road map, on which Local Natives have captured their true spirit once again.