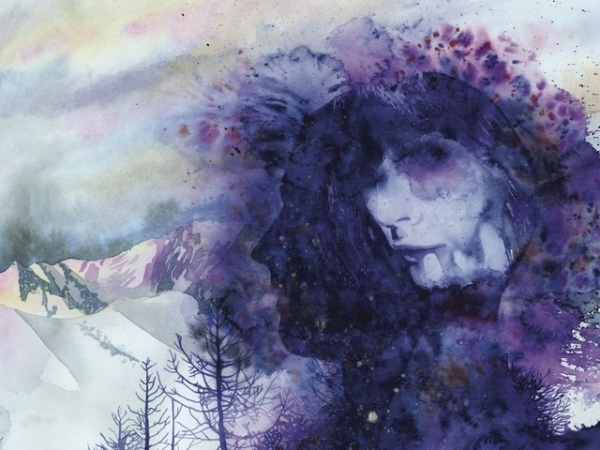 A Triumvirate is defined as being a political regime with three equal powers in charge or dominating. At least that’s meant to be what happens; listing just Julius Caesar and Lavrenty Beria as members of famous triumvirate points to the fact that in reality, there’s always someone out for a bit more power.

Such violent political talk doesn’t seem like the basis for an album, but in the press for the third full studio album by Lewis & Clarke (named not for the explorers but for the correspondence between CS Lewis and Arthur C Clarke) Lou Rogai has applied the definition to his personal circumstances. Triumvirate is the third record in a series of releases detailing the transformation, breakdown and ultimate destruction of a family unit which began with the birth of Rogai’s child on Blasts of Holy Birth, the dissolution of the “nuclear family” on the Light Time EP and here, the sad, broken yet hopeful aftermath of a traumatic event – something Rogai has clinically described thus: “I found myself in a three way power struggle. It wasn’t pretty. I was able to eliminate one-third of it and worked hard to create a new version. I mean in terms of my family life, not musically.” It’s a cryptic reference, although we must assume it refers to his family/personal life it’s hard to pinpoint exactly what it is. What the music on Triumvirate seems to represent is Rogia just about keeping his head above water: the music is equal parts mournful and joyous, taking cues from nature to suggest regeneration and beginning anew.

What Rogai gives us is seventy-five minutes of folk and chamber music, beautifully composed and played. Yes, you have to devote a lot of time and patience - and emotion given the subject matter - but Triumvirate is worth it from the moment the sweeping strings and teardrop Rhodes piano of the epic ten-minute “Eve’s Wing” begins the journey of renewal with a tale dedicated to cellist Eve Miller (of Rachel’s) and her recovery from a broken arm. As violins swoop like late summer swifts in and out of the song, Rogai sings “Bird of fire / make your flight / take what cannot burn…drop your feathers and be free”. As much as it might be about Miller coping with a broken limb, there’s hints of renewal and rising out of the ashes to create something new – linking the song to whatever personal upheaval was taking place in Rogai’s life at the time. It can be read as a positive start in some ways despite appearing to place us in the immediate aftermath of the traumatic event which defines the album.

The mood takes a downward swing on “Black Cloud”; the gorgeous piano hides a tale of someone spiralling out of control, unable to influence the titular cloud. It’s a song of helplessness in the face of taking risks, again referencing birds, but Rogai tries to end on a note of positivity: as a sparkling and beautiful bridge signals the end of the song, like Bad Seeds at their most delicate, we find the singer asking “who will carry you, when you fall?” It’s not a question full of bitterness, but one of resignation. An admission of defeat which, in some senses, is a way to begin again.

The title track “Triumvirate” is a bruised centrepiece that finds Rogai singing of “a spark that got away” and a “thread about to break”, continuing the album’s downward sweep. Again, the track is constructed out of strings and piano, compositionally perfect with just a hint of woodwind. The bonus of this record being a double album is that Rogai is allowed to fully realise his vision of Lewis & Clarke (with the help of brothers Ian and Shane O’Hara, and Anthony Lavdanski). As songs push past four, five, six minutes Rogai’s stories (both musically and lyrically) develop at their own pace, cleverly revealing details as they go, not weighing the listener down with “woe is me” tales but instead dressing his stories up in allegories related to the natural world.

While the raw “Children of the Sun” is scabrous in its address to fakery, the second half of the album is very much an upward sweep of emotion. “Two Trees” (on which Rogai’s son recites poetry over Satie-esque minimal piano) takes solace in the bent-but-not-broken nature of trees, the droplet Rhodes keys and finger-picked beauty of “Ascensionist” is candid in its positivity and the closing “Sojourn Sam” is a sunrise waltz full of hope and joy.

I’m not really sure how else to describe the seventy-five minutes of sheer beauty and trauma that Lewis & Clarke guide us through other than to say Triumvirate is a record of hope. Gorgeously crafted and composed, full of wonder, it may be of comfort to anyone who has been through a life-changing event…look around the ashes and you’ll find something with which to start the rebuilding.