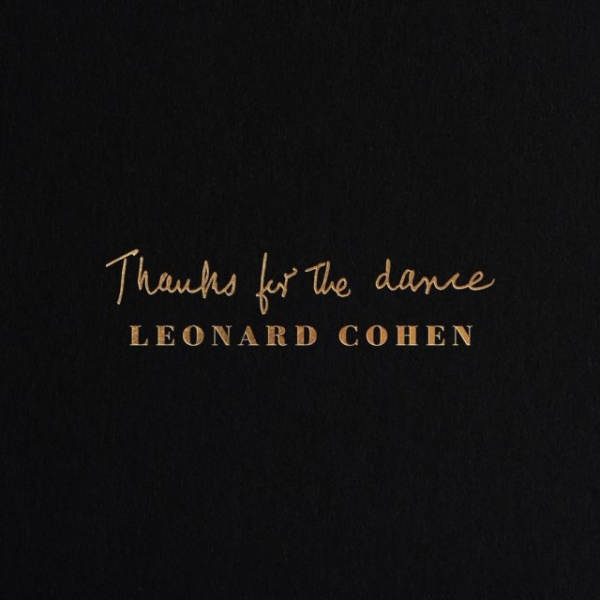 Thanks for the Dance is the final full studio album we’ll ever hear from Leonard Cohen. For those of us who have had any kind of connection to this man, this poet, this icon, those words are tough to take. Tougher still is the knowledge that these songs were from the same sessions as his ‘other’ final album,You Want It Darker (a masterpiece by any measure).

Thanks for the Dance, at just under half an hour, is also Cohen’s shortest album. At three years after his death, it’s his first – and last – posthumous album. It’s an album of tying up loose ends, “settling accounts of the soul”, finishing his project. Unlike, say, David Bowie’s Blackstar, this isn’t vicious, forward-facing music that stares death directly in the face, but an album of acceptance, calmness and peace. Leonard Cohen didn’t leave this world fighting, but he embraced death as an old friend, two tired, road-worn angels finally on the same highway, together at last. He also entrusted his final music to one of his favourite creations: his son and heir, Adam.

Amongst the names roped in to help finish the album are (in no particular order): Beck (on Jew's harp and guitar), Daniel Lanois (on guitar and piano, amongst other things) and Leslie Feist, Damien Rice and long-time Cohen collaborator Jennifer Warnes all on vocals. Presumably Adam Cohen himself features in more of a capacity than ‘producer’, but his musical contributions are unclear.

While the album doesn’t feature anything as particularly powerful as “You Want It Darker”, “Treaty” or “Leaving the Table”, each of the tracks has gravitas, has weight. Adam has fully finished these songs, and given the poems suitable power through his sympathetic production. Nothing has been left in a skeletal condition, no matter how bare the bones were when he inherited the project.

Idly presenting Cohen’s lyrics in this review would be tantamount to heresy, such is the quality of Cohen’s pen – so the words will remain a mystery until you uncover them for yourself. Needless to say, there’s the customary mix of sweaty sex, divine awe and thoughtful resignation; Cohen rages at Jesus and Karl Marx; he alternates between weighty similes and powerful imagery in his graphic depictions of sex on “The Night of Santiago”; on the title track, he deals with an unwanted pregnancy, missed opportunities and lost futures with the peaceful contentedness that only age provides...

The music here is made drawn from the full (post-'80s) Cohen playbook. There are gentle electronic washes, light synth leads, hushed percussion, leathery spoken-word, coal-black atmospherics and ashen guitars. Where Death Cab for Cutie’s Zac Rae, producer Michael Chaves and a motley crew of competent session players bejewelled You Want it Darker with a wealth of sonic gems, the starkness and serenity of Thanks for the Dance means that the overall contribution of musicians is reduced, but the sonic gaps are filled ably and abundantly by Avi Avital’s mandolin on “Moving On”, and by Javier Mas’ laud throughout. Oh, and of course there’s choir or two (they appear on “Puppets”).

This is a thrilling conclusion to an incredible, peerless career, and it just so happens to be one of the greatest posthumous albums of all time. Now that we have the full story, we can try to comprehend the immense contribution Leonard Cohen made to the tapestry of recorded music in his 50-year career.

So long, Leonard, and thanks for the dance.