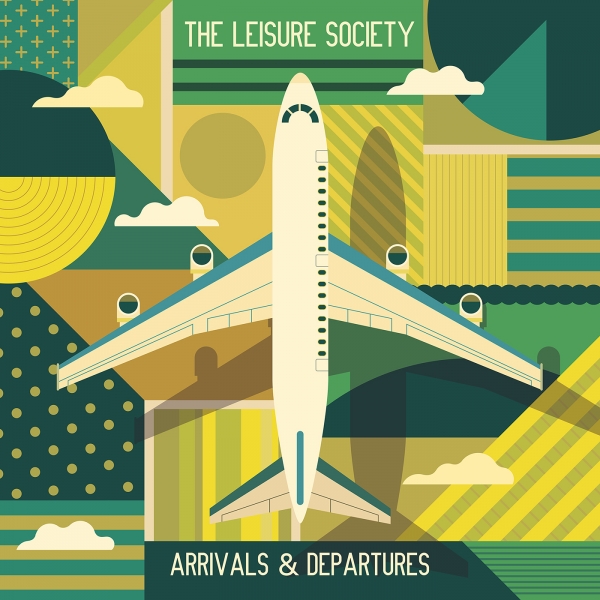 There was a time where The Leisure Society was often referred to as Britain’s answer to the likes of Fleet Foxes and Grizzly Bear.

But while those acts have undergone noisier, experimental and more earthy makeovers (not to mention plenty of festival top billings between them), The Leisure Society has, for all intents and purposes remained the same. If anything, the past couple of records have strayed closer to the lush bombast of The Divine Comedy and bright, quasi-country songwriting of Camera Obscura.

Look at frontman Nick Hemming in 2019 and you’ll see a man who still has the waifish charm of the boy who was in She Talks To Angels with Paddy Considine and Shane Meadows in the early '90s. And throughout his relationship with pianist, producer and fellow Wilkommen Collective member Christian Hardy as the core of The Leisure Society there has been a consistent sonic and visual aesthetic. This is all to say that it is therefore a safe assertion for one to assume that Arrivals & Departures, the fifth album from the Sussexian folk-poppers, would not be a seachange.

Hemming knows this. He knows what a Leisure Society LP is, and for the first half of this double album that’s what we’re presented with. Tracks like "Overheard" and "God Has Taken A Vacation" play out like classic Leisure Society fare. Sweet and tightly arranged instrumentation of acoustic guitars, pianos and strings complement Hemming’s crooning vocals that take a more melancholic turn. This first half even features Brian Eno (a long-time champion of the band) providing synths to "I’ll Pay For It Now".

Hemming’s world-weariness that comes across on the album’s first half (the Arrivals section) is reflective of the tumultuous songwriting process. While promoting the band’s fourth album, The Fine Art of Hanging On, Hemming split up from partner and Leisure Society flautist Helen Whitaker. While the pair appear to be on decent enough terms now – Whitaker features prominently throughout the album – Hemming moved from their Brighton home and spent much of 2016-2017 staying with friends and family.

This uprootedness for Hemming came amid a similarly tumultuous time for the rest of us, in case you weren’t paying attention. The closest the band gets to anything political is "There Are No Rules Around Here", which was written in the wake of the 2016 US presidential election. That track comes from the second half of the album (dubbed Departures) which, while still sounding very much like a Leisure Society LP, is louder, more experimental and interesting than anything the band has produced before. It’s not quite a Kid A-like stylistic upheaval, but tracks like "Mistakes On The Field (Part I)", "Beat Of A Drum", along with the aforementioned "There Are No Rules Around Here" are more groove-heavy and electrically tinged than what precedes them.

This second part also takes a different lyrical tact. Arrivals, with its swooning melodies, encapsulates the mournful feeling of lost love, the snapshots that we carry with us. “The bed that we made on that burning summer night,” as Hemming sings on "Let Me Bring You Down". It is sweet and heartbreaking, instantly relatable yet intensely personal, and shows Hemming as a master of his craft.

Departures, by contrast, is a much more fearful take. If Arrivals is the dying embers of a relationship, Departures is the ash and remnants that are left behind. No longer guided by nostalgia, Hemming here is portraying a voice that is fumbling in the dark for what’s next. “A search for a sound, billowing in the nowhere of now,” as "Beat of a Drum" says; “Back to where we start, to where it all began/I don’t want to do it again,” Hemming sings on "Don’t Want To Do It Again".

This step into the unknown and reticent evolution is also reflected in the band’s choice of personnel. While Hemming and Hardy have previously handled all the production of the band’s back catalogue, for Arrivals & Departures they sought out the mixing expertise of Gareth Jones, based on his work on Grizzly Bear’s Veckatimest. Jones’ presence is felt throughout, with a fresh energy making even the album’s most on-brand songs stand out from much of The Leisure Society’s discography.

The record’s emotional climax is the genuinely breathtaking "You’ve Got The Universe", where Hemming’s heartfelt delivery is accompanied by a soaring string section that hearkens back to Father John Misty’s 2015 I Love You Honeybear. The album’s final track "Ways To Be Saved" serves as a full-stop, and a quiet statement that says ‘I’m ready to move on’: “Though you’re a joy to behold I can’t keep holding on”. It’s not quite a fairytale ending, but like the rest of the album, it is powerful in its simplicity.

The two sides of Arrivals & Departures are defined as a double album by the band, and could quite easily have been put out as two seperate releases. This isn’t a bloated session with a knife arbitrarily splitting it apart. The clear thematic and aesthetic differences make for two isolated wholes which work even better when sat next to one another. It is for this reason that Arrivals & Departures (which could have alternatively been titled Loss & Anger) is the most ambitious Leisure Society record to date – and the most accomplished.