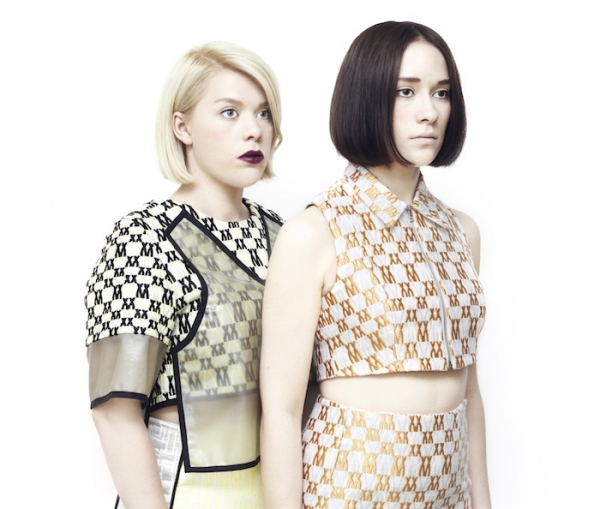 Despite the dayglo cover and tongue-in cheek approach to photo shoots, their ludicrous website and general approach to public relations, LCMDF really aren’t the “trivialisers” of mental health issues that one publication rather unkindly described them as recently.

Yes, you’re likely to run into accusations of treating a sensitive matter too lightly if you call your new EP Mental Health AND name tracks ‘I Go Insane’ and ‘Paranoia’, but there’s a genuine positive outlook at work on the Finnish duo’s new release.

Once called Le Corps Mince de Francoise (The Skinny Corpse of Francoise), the band have slimmed down both their name and their members since their debut album Love & Nature, and LCMDF now consists solely of sisters Emma and Mia Kemppianen but they remain as fun a proposition as ever. Mental Health is the first of three EP releases which LCMDF believe to be the best fit for their themes of mental health and self-help (plus yoga and bubble tea, apparently), rather than addressing the subjects over the course of a full album. Citing influences as wide as TLC, Weezer, Chemical Brothers and All Saints, Mental Health is four sharp songs of dance-rock/pop, with the opening shoegazey guitar noise of ‘I Go Insane’ a completely wrong-footing beginning for what becomes a girl-group chant-along backed by the Chemicals’ backwards-drumbeats of ‘Setting Sun’. As the grooves burrow into your brain, you can’t help but sing along to “Check your head, before I need to check myself/It’s unfair, I don’t feel sane anymore”, and realise that it’s an unhealthy relationship that’s making the Kemppianen sisters fear for their sanity.

That feeling feeds into ‘Paranoia’ which begins with the lyric “All this, all this hate/Gimme a break, gimme a break” over wah-wah guitars and a proto-R’n’B beat, then a Mel B-like half-singing, half-rapping voice declares “I got my mind messed up by the things you say/Some people love and other just hate/When I go to bed at night/I’m petrified/But it’ll be alright”. Everything is then strafed by some heavy dance-rock riffing in the chorus, making for a brilliant, brilliant pop tune.

The rest of the EP has a lot to live up to after those ace tunes, and ‘The Big Skip’ is a little too second-division-’90s-girl-band level to be much cop and yet… The tune, with its little sampled whistle and seesaw synths, slowly becomes an immovable earworm, and sets us up nicely for the closing track ‘I Want to Believe’. This track screams All Saints right from the off – and let’s not forget that Mel, Shaznay and co had a run of excellent singles between 1997 and 2000 – with its swinging, swag(gering) beats and sharply strummed acoustic guitars, the verses talking of going on Google and social media to find someone with the answers, in reply to the questioning chorus of: “Where should I go to find me a partner/What should I do to get me some laughter/I shouldn’t feel… feeling like this/Cuz I’ve been treated like shit”.

Underneath all the talk of dead ends, there’s hope shining through the content of Mental Health Part One. Who knows what will come with the next couple of releases (depression? Mania? Violent mood swings?) but for now, LCMDF make life coaching seem fun for probably the first time ever.