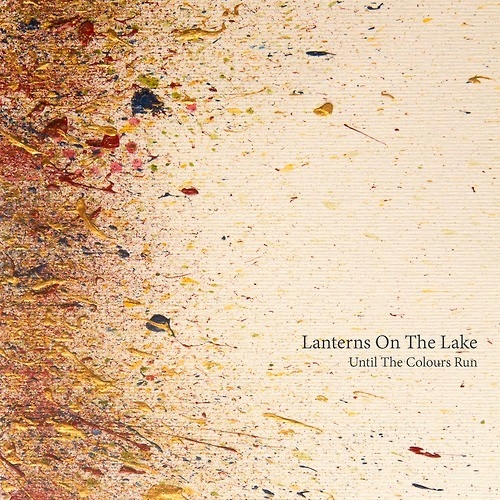 Back in 2011, Lanterns On The Lake finally turned in a debut full-length, fully four years after their inception; Gracious Tide, Take Me Home was deservedly well-received, but the band disappeared back into the wilderness shortly after its release. Given the period of financial and personal turmoil that followed, with lineup changes calling the group’s future into question, it’s probably surprising that they’ve managed to produce a follow-up quite so soon. Not that the intervening years have had no effect on the Lanterns outlook; Until the Colours Run is a record underscored by the nervousness that defined the time of its conception.

Gracious Tide, Take Me Home showcased Lanterns’ keen ear for epic soundscapes, so it’s no surprise to hear Colours simmer into life in much the same fashion; opener ‘Elodie’ strikes a smart balance between bombast and nuance. Shimmering guitars and crashing drums repeatedly give way to Hazel Wilde’s serene vocals, with piano and violin providing occasional punctuation; there’s a pleasing diversity to the record’s generally straightforward instrumentation.
Colours tends to veer between that vein of downbeat, post-rock-referencing dramatics and popper efforts; ‘Buffalo Days’ and the title track both show a deftness of touch with melody that presents Lanterns as a more subtle, thoughtful alternative to The Joy Formidable. ‘You Soon Learn’, meanwhile, is characterised by the kind of chiming guitars and dreamy harmonies that the likes of MONEY have ensured are currently de rigeur; Wilde, meanwhile, takes her cues from Sigur Ros, delivering a barely-there falsetto. It’s a delight, too, to see a band so confident in their use of strings merely to add a little colour to proceedings; there’s proof in abundance here that there’s smarter ways to lean towards an orchestral sound than just the kitchen sink approach.
Wilde’s vocal flexibility is all the more impressive when you consider that she’s working with relatively limited resources; she’s by no means the most spectacular of talents in that regard. This constantly-shifting approach, though, isn’t always successful; her turn on piano ballad ‘Green and Gold’ is superb, replete with heartbroken sincerity, but ‘The Ghost That Sleeps in Me’ sees her adopt a strangely-hushed tone that, backed by plodding percussion, is likely to lose the listener’s interest long before a gorgeously uplifting instrumental climax arrives entirely from leftfield.
It’s difficult to overlook the political undercurrent on Colours; lyrically, it taps into a far wider spectrum of issues than many of the band’s contemporaries, and given their recent history, constant allusion to feeling downtrodden and overcoming adversity is assuredly genuine. They’ve already insisted that they didn’t set out to be overtly political on this record, but – rightly or wrongly – listeners are bound to connect the dots between Lanterns’ northern heritage, their recent difficulties and the album’s unsettled atmosphere, and assume some degree of anti-government stance. Lead single ‘Another Tale from Another English Town’ does a fine job of capturing the bizarre blend of anger and apathy that currently represents the British political climate; lines like “we’ve been sold a thousand lies this year” and “they won’t stop till they see us in the ground” are cases in point.
The current steady stream of stellar releases might see Until the Colours Run slip through the net as far as wide recognition is concerned; it’d be a shame, because Lanterns on the Lake have drawn on harsh experience to produce a beautiful record that’s anything but superficial.