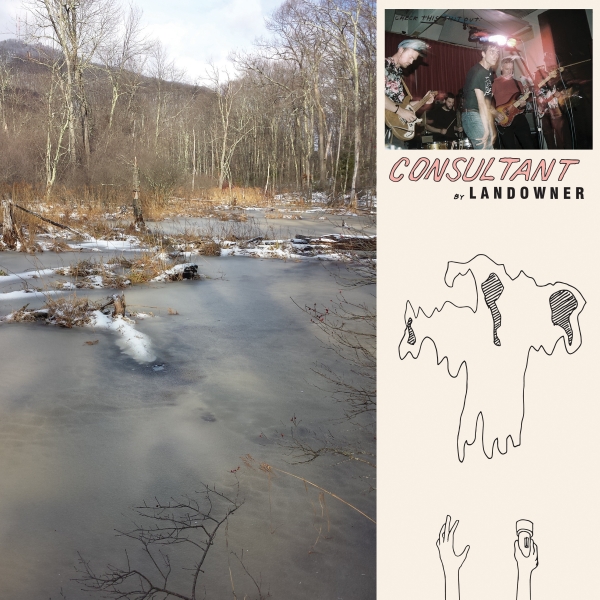 Following a relocation from Seattle to his home state of Massachusetts, Landowner’s Dan Saw decided it was time to dial things back a notch.

Ditching any form of excess carried over from previous musical projects, Saw began investigating a sound that revolved around a cleaner and more precise aesthetic. Aptly described by Shaw “as if an abrasively clean band were reading the sheet music of hardcore songs”, his solo efforts eventually became a group effort, with Landowner’s first recorded venture being 2018’s Blatant. Since that release, the band, which as well as Shaw consists of a proficient group of formally-trained musicians, have continued to refrain from grandiosity while deriding the imbalance plaguing much of American society. And so, we arrive at Consultant.

Primarily packaged into short, nifty tunes, with the main exception being the seven-minute “Mystery Solved”, the fat on Consultant has been trimmed to a quite considerable degree. Mechanical and highly efficient in their playing, the effect is one of total streamlining, where the message Shaw delivers is played out on a largely uninterrupted centre stage. Take “Phantom Vibration”. Reminiscent of both Slint and Big Ups, the track rolls through a handful of segments, as Shaw dictates a tale of a man bending to debilitating pressure. Lacking the emotional payoff the aforementioned bands delivered in abundance, the track is nevertheless kept clean and taut, largely excellent if unrelenting in its quest for musical minimalism.

That’s not to say that the style isn’t without serious merits. There are times when the highly-strung instrumentation works to perfection, developing notions of displacement and burgeoning danger amid supreme order. “Confrontation” is a prime example of Landowner adopting the lurking darkness of a Joy Division track and amplifying it to stunning effect, Shaw’s cries of “alarms going off inside your brain” juxtaposed in jarring fashion by the band’s tightly crafted playing. Among others, “Confrontation” is a masterfully written piece of music, reflective of the potential chemistry Shaw and his band can achieve.

Speaking of Shaw, throughout Consultant he proves himself to be a highly arresting and challenging vocalist. Delivered in his distinct, nasally growl, his concerns vary from those of wider society to those with a more distinctly local feel. His clear distaste for the inability for someone with power to accept they’re wrong on “Being Told You’re Wrong” bares particular resonance given the current occupier of the Oval Office, whereas “Stone Path” broaches the issue of societal bias greatly benefiting certain peoples at the expense of others’ misfortunes. It's a well-trodden path, yet as has only been reemphasised by recent events, it’s one we continue to walk in abundance.

Whether it’s racist housing or striving for a sense of purpose, throughout Consultant Shaw tirelessly draws attention to both the macro and micro disturbances affecting society today. More than that though, he is also clear on the need for active participation to right these wrongs, imploring on “Stone Path” how “You could make things worse by staying out of it”. It’s not enough to recognise the issue; these things require action to effectively resolve. A sentiment more than anything that makes Consultant an album befitting of 2020.