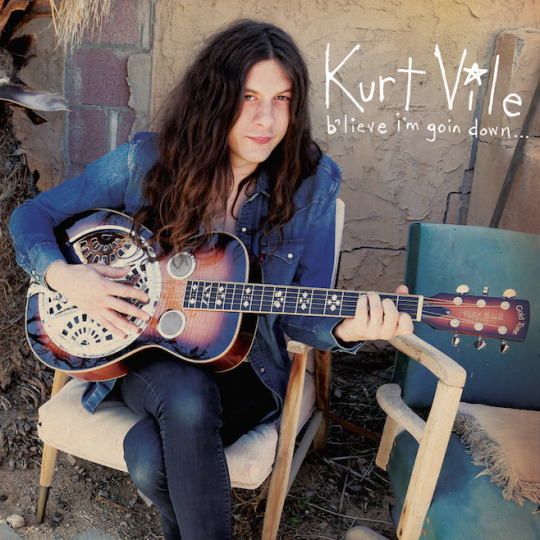 Kurt Vile sounds depressed and full of discomfort and self-doubt on his new album, b’lieve i’m goin down. He’s said of the record; “I wanted to get back into the habit of writing a sad song on my couch” and the 12 songs here are indeed filled with sad, personal music. Throughout the album, Vile questions the world and himself, but, even as he reaches for the profound, the album’s trite lyrics and lack of melody undercut his ambition.

The nadir is “That’s Life tho (almost hate to say).” Vile crams two cliches into the song title (and chorus) alone and then piles them on ad nauseum. Vile takes pills to “take the edge off,” goes for a “night on the town,” declares something “neither here nor there” and that “hell has finally frozen over.” He tells us about a “chosen one” who “touched the lives of many,” puts someone “on a pedestal” and, although he “hate[s] to state the painfully obvious,” he finds life “so sad, so true.” Even worse, the hackneyed lyrics are paired almost 50-50 with inscrutable imagery and all in the service of some cryptic and equally inscrutable parable.

Throughout the album Vile’s lyrics are overly prosaic, a fault underlined by his delivery. On b’lieve i’m goin down Vile speaks almost as often as he sings. With no interesting melody to liven up his uninspired words the songs often become bleary and, apart from moments when surprising instrumentation like the banjo on “I’m an Outlaw” momentarily perks things up, the album suffers from being undynamic. One of Vile’s strengths as a songwriter has been the almost hypnotic repetition of his guitar parts. On b’lieve i’m goin down, that previous strength, now combined with his flat, accentual vocal phrasing, makes many of the songs numbing and tedious.

The high points of the album are the changes of pace, the songs filled with melody. Album opener and lead single “Pretty Pimpin” is an itchy song of frustration a la Bruce Springsteen’s “Dancing in the Dark.” The song is Vile at his most inspired lyrically. After singing that he didn’t recognize himself in the bathroom mirror, Vile summons some of his most vivid imagery, “I proceeded to brush some stranger’s teeth / But they were my teeth, and I was weightless / Just quivering like some leaf coming in the window of a restroom.” On the chorus he sings, “it was a Monday, no a Tuesday, no Wednesday, Thursday, Friday / Then Saturday came around and I said "Who’s this stupid clown blocking the bathroom sink?” in an evocative depiction of dissatisfaction and restlessness. “Pretty Pimpin” matches a driving rhythm with alternately languid and rapidfire melody to convey a powerful sense of both movement and torpor. Not coincidentally, it is probably the only song on b’lieve i’m goin down that will end up stuck in your head. Other highlights include the syncopated, 70’s piano jaunt of “Lost My Head There,” “Life Like This” with its ascending piano melody punctuated by a sting of electric guitar, and the dreamy, spacious instrumental “Bad Omens.”

Vile continues to be a masterful guitar player. Just as it was on his earlier work and in contrast to his singing, Vile’s guitar is articulate and emotional while simultaneously giving his songs a strong sense of rhythm. He is equally as good picking a melody as he is with a riff. But on his previous album, the breakthrough Wakin on a Pretty Daze, those guitar parts were matched by equally strong vocal melodies and a real sense of space. b’lieve i’m goin down is too often cluttered feeling, gray and monotonous. That makes it an unfortunate step back from a very talented artist.