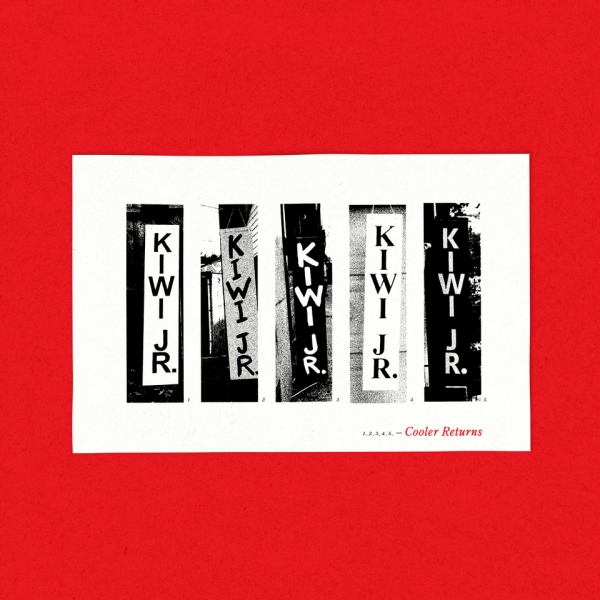 On last year’s self-released debut Football Money, Kiwi Jr. introduced us to their unique view of the world through a stream of absurdist short stories and groovy, deliriously infectious indie-rock. Now signed to Sub Pop, the Canadian outfit are upping the ante on their follow-up record, tackling the strangest start to a decade in living memory with uncompromising humour and a seemingly endless supply of hooks and melodies.

Assembled in “flow state” during the first stages of quarantine, Cooler Returns plays out like a vast, sprawling stream of consciousness that’s nearly impossible to keep up with at times; a long-form narrative littered with observed and imagined characters, urban legends and work-from-home distraction headlines as frontman Jeremy Gaudet, in typically impressionistic form, daydreams his way out of drudgery with tales of musician exes, local arson, political apathy and more.

Rattling through earworm after earworm, Gaudet’s wry observations and lyrical anecdotes hold the whole album together and they immediately dig deeper than before. Opening single “Tyler”, a Kinksian slice of power pop about ditching the frontman balances their trademark sharp humour (“I was falling apart in the green room / while you drank half the headliner’s rider”) with a tinge of wistfulness (“you work for Microsoft / I scrape the wallpaper off in the new guest bedroom”)

Against the backdrop of the pandemic-infused ‘Terrible Twenties’, they are more acerbic and abstract than ever. The instantly addictive “Undecided Voters” sees them turn their attention to the bizarre world of modern politics, unleashing their frustration over three minutes of jangly indie pop that you’ll be humming for days. On the sweetly melodic “Maid Marian’s Toast” they cast suspicion over a local arson attempt; on “Omaha” they demand proof that “Woodstock ever happened in the first place” and album highlight “Nashville Wedding” is a tale of romantic mishaps packed with brilliant lyrical winks to the listener (“I wanna hold the minister’s hand / strangle the jangle pop band”). Running from one daft image and witty one-liner to the next, it doesn’t always make sense but why does it need to when it’s this fun?

Packed full of infectious riffs and jangle pop goodness, they manage to finesse the breezy indie-rock of their debut without losing any of their ramshackle charm, expanding their Parquet Courts-inspired palette to make room for flashes of saloon piano, up-tempo organ taps and harmonica. What sets Kiwi Jr. apart from their peers though is their madcap view of the world and Cooler Returns establishes them as a band too confident to conform; a band who have all the skills to match their lyrical smarts.