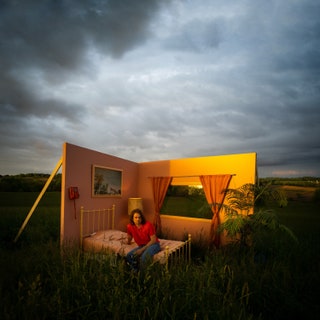 Some artists, at certain points in their careers, produce an album that’s unlike anything they’ve ever done before. It could be louder, wilder, more experimental, more expansive – or, as is the case with Kevin Morby and his new album Sundowner, it could be more peaceful, more introspective.

If this were any other year, it’d be a surprise that an artist was releasing two albums as close together as Morby’s last two (his previous album, Oh My God, was only released last year), but COVID has forced his hand. Sundowner was intended to be released at the end of the OMG tour, as a kind of coda to this phase of his career, but the pandemic has meant that it was sitting around doing nothing – so Morby went right on ahead and released it into the world.

Though it’s quieter, more reflective and certainly sparser than anything he’s ever done before, it still contains all of the hallmarks of Kevin Morby’s best work. Morby can, and frequently does produce golden melodies that draw from Dylan, Young and Mitchell, and he’s got the knack of producing a lyrical zinger out of thin air a la Lou Reed or Ray Davis. His is a full, complete music, with moments of beauty in both sound and word.

The sublime opening trio of "Valley", "Brother, Sister" and the title track all essentially prove that notion within the first ten minutes of the album. They’re all completely, uniquely Kevin Morby in the way that they spin bliss from seeming despair. This is not his usual greasy, glammy, freewheelin’ despair either, but an open-wide, cinematic and thoughtful slant on his usual sound.

The piano on "Don’t Underestimate Midwest American Sun" is stunning, and it’s only part of the collage. Gentle guitars and simple drum machine thuds punctuate and decorate the space around Morby’s haunted voice. Elsewhere, when Morby decides to light the campfires rather than simply building them, the power he wields with the guitar is incredible to hear. "Camfire", and "Wander", are both filled with gleaming, white-hot guitars that hum and burn like Crazy Horse.

This is a simple album for immensely complex times, and Morby – as usual – provides the sonic salve to heal any lingering pains his listeners have. This is both greater and lesser than his previous albums, and – much like Bob Dylan’s Another Side of Bob Dylan or Joni Mitchell’s Hejira – it provides an insight into the mind of the artist, completely unadulterated and completely engrossing. This is a great work, and I, for one, am glad it hit the shelves sooner rather than later.