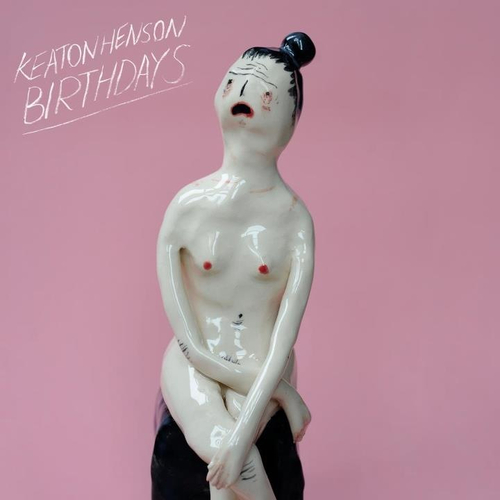 I won’t deny that I find Keaton Henson a fascinating individual. His relative success seems a total accident and perhaps completely unwanted by someone who suffers from crippling stage fright, anxiety and struggles to hold a one-on-one. Yet, he’s a singer-songwriter with album number two completed, a poet and an extremely talented visual artist.

This month has seen him take steps back into playing live through a tour in the safe and cultured surroundings of libraries and museums – who would heckle a man playing songs in a library for crying out loud? – in anticipation of that second record, Birthdays. Henson’s first album, Dear… was recorded bedroom-style, which you might expect given the information already covered here, which makes it all the more interesting to discover that he was persuaded to record album number two completely in California, under the supervision of producer Joe Chiccarelli, and featuring guest spots from Jesca Hoop, Tyler Ramsey of Band of Horses and one-time Pearl Jam drummer and session man Matt Chamberlain. And yes, that means there are some surprising plugged-in moments that may shake anyone expecting pure unadorned troubadouring.

Alongside the interesting back story, it’s Henson’s pure honesty that – for better or worse – stands out most about Birthdays, whether from his own perspective or re-telling a tale from the position of his (ex) love. Unreliable narrator be damned, I’m taking him at his word when, on ‘In the Morning’, he sings “Perhaps you liked me more when I was still in a band”. This is matched by his own naked, painful honesty on the likes of ‘Kronos’ where he paints himself as something of a monster, then apportions blame on ‘Sweetheart, What Have You Done To Us’ as he sings “I admit I think you may have broken it” or details self-destructive tendencies on ‘Lying To You’, a song about staying with someone despite knowing that you don’t love them: “And girl you must know you are lovely/You’re kind and you’re beautiful too/And I feel in some way I do love you/But babe, I’m not in love with you”.

For the most part Birthdays takes the style of the debut album and adds little flourishes such as the stirring swells of brass on ‘Sweetheart What Have You Done To Us’, Jesca Hoop’s beautifully fragile backing vocals on the barely-there ‘10am Gare du Norde’ and the doomy, atmospheric strings on ‘You’. All this adds up to a relatively satisfying whole, if you can really be allowed to enjoy an album as bleak and unforgiving as this plainly is. When we do get to the run of tracks that turn up the volume, they don’t jar as you might expect as there’s a build in tension and emotion across the tracks that feature only Henson and his spidery electric playing. ‘Don’t Swim’ is brimful of feeling and finally spills over in a wonderful soloing outro after he and Hoop harmonise beautifully over whispered lyrics, ‘Kronos’ is all anger and self-loathing from the first riff and nearly inspires Henson to sing in something approaching a yell.

But we always return to Henson and his introspective thoughts in the end; the closing trio of ‘Beekeeper’, ‘Sweetheart…’ and ‘In the Morning’ are the best moments on Birthdays. On the former he croons “You all say I crossed a line/The sad fact is I’ve lost my mind” then “all I want is to be left alone” over a bluesy country stomp, and the image of Henson, broken, bearded, in a crumpled suit in the Californian sun appears, at once both ridiculous and touching. And that’s the figure I imagine going home with the woman on the closer ‘In the Morning’, who subsequently asks “Keaton, is it morning yet?” He replies: “We have a couple hours yet/But what things lie for us ahead?/Woman I will see you in the morning”. Is it hopeful, resigned or said without emotion? It’s hard to tell; Henson’s taken us on a journey through the dark recesses of his mind, so let’s just leave him to his moment of… well, whatever it is.

Birthdays could mark the next phase of Keaton Henson’s career as a confident artist: he’s out playing shows, he’s travelled, he’s experimenting with a fuller sound and it’s all working out brilliantly. The album isn’t easy going: it’s hard to completely love a record as bleak as this. It shares a likeness to the work of another bearded man with a guitar who’s had some troubled times, Josh T Pearson. As much as Last of the Country Gentlemen is an excellent record, it’s not one to out-and-out fall in love with due to its unremitting barrenness and self-loathing, but Henson has a poet’s way with words and an expressive voice that you’d never tire of listening to. And that, to crib from the man himself, is enough to make me say that I do love many things about this record, I’m just not in love with it.