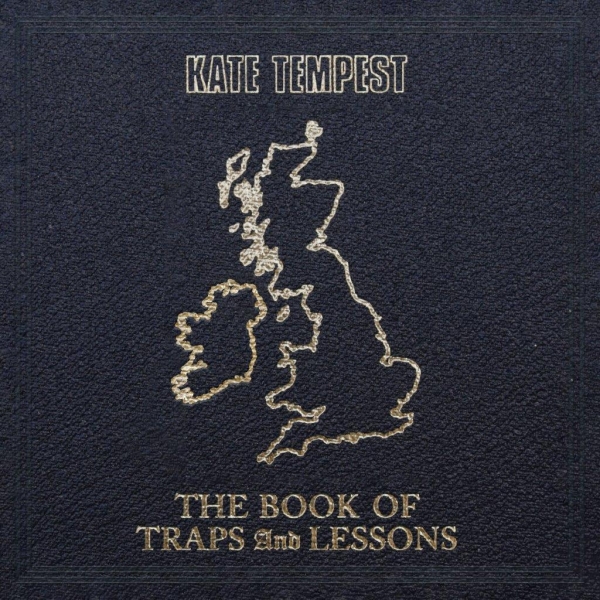 Each time you hear this album, it’s like hearing it for the first time.

A lyric you missed will jump out at you – and sometimes hit you so hard in the face – you won’t understand how you missed it.

The album makes us confront the stark reality of how abhorrent we are as a human race. At times, it’s almost uncomfortable to listen to. We’re reminded of how we’re messing up Brexit, how we’re killing the planet, how we’re striving for an unreachable goal of thinness, how we keep screwing up our relationships, how we’re slaves to our phones. Yet Kate Tempest, thankfully, always manages to hold onto hope in the end.

Tempest is no stranger to long narrative threads and storybook albums. Her first album, Everybody Down, brought us into the high-octane drug fuelled worlds of Becky and Harry, on her last album, Let Them Eat Chaos, Tempest captured the interlacing lives of seven unconnected strangers in the early hours of one morning, and like that album, The Book of Traps and Lessons is a story – but this time, the characters are us.

The beats, basslines and discordant soundscapes that characterised her previous two albums have gone. Working with the legendary producer Rick Rubin, these clashing beats are replaced with soft piano chords, light strings – or sometimes nothing at all, to the point where "All Humans Too Late" is entirely spoken word. The change elevates her lyrics, so it’s just the anger and anguish we have left to listen to. “The racist is drunk on the train / The racist is drunk on the internet / The racist is drunk at my dinner table” she cuts. ‘All Humans Too Late’ is like the voice in our heads telling us what we ‘should’ be being better, and what we’re not doing well enough. There’s no room for cognitive dissonance on this album – meat is killing the world, porn is killing our relationships, and Tempest will tell it to you straight.

The album is a scathing critique of capitalism, but Tempest isn’t spending a lot of time focusing on it – she’s just stating facts. She has a unique capacity to include all the world’s issues in the album just by slipping in an occasional nugget of truth that punches the listener in the gut. This is the most prevalent on "Three Sided Coin": “The sky’s an unusual colour / The weather is doing unusual things / And our leaders aren’t even pretending not to be demons”. Tempest has always managed to link the mundane with the elevated, the pitfalls of love with the fanciful nature of relationships. This is most prevalent on "I Trap You": “Can’t you see I’m walking this threadbare tightrope? / Made out of dental floss stitched together with strands of tobacco and dog hair”. Her cynicism is contrasted with a plinky-plonky fairground tune in the background, that fades in and out while she spits out cold hard truths. Our constant need for more things, more stuff, to make ourselves feel better has been something Tempest has rapped about since she started making music. She was cynical about phones and social media on Let Them Eat Chaos, and even more so on this album. Instead of trying to repair the damage we’ve caused the world, whether political or personal or environmental, she laments how we are “online, venting our outrage / Teaching the future that life is performance and vanity.” Tempest doesn’t absolve herself of guilt either, which makes the album powerful and not preachy. With two previous Mercury-nominated albums, she still manages to stay fully down the earth: “I don’t want to feed like some ravenous mouth / With no guts, only greed, endless appetite / Need, need, need”. You can hear the raw honesty and desperation in her voice when it breaks and lilts back up – it’s symbolic of the whole album, a note of despair turning into a note of hope. As she says on "People’s Faces": “Now I don’t have the answers / But there are still things to say”.

"Hold Your Own" and "People’s Faces" are not new tracks. Both have been doing the rounds for years, rapturing crowds at festivals and the former titling Tempest’s first full-length poetry collection published in 2014. It makes complete sense to include these tracks on this album. They bring the hope on an otherwise dark and cutting album, and continue Tempest’s journey in writing about the power of people. "People’s Faces" has been updated slightly to include a nod to the “bumbling farce” of Brexit – something that looms over the whole album: “Was that a pivotal historical moment we just went stumbling past?” she asks.