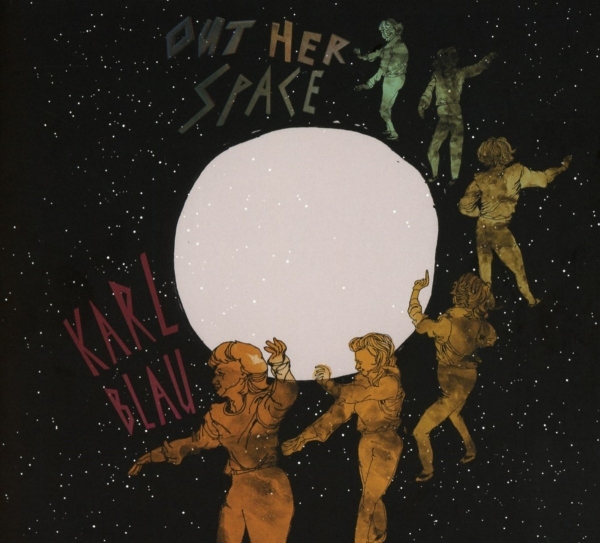 Henson Cargill’s Six White Horses come cascading across the southern terrain of Karl Blau’s aural tapestry. However, the story - unlike that of Introducing Karl Blau - is not simply set in an idyllic American pastoral scene.

Blau’s reverberated chords reach farther afield. Like an estuary, different forces intermingle in harmony flowing in and out of the microcosm into the larger body of Blau’s sound. Combining the personal with the political whilst transgressing the rigidity of genre through fusion of country, afrobeat, funk and jazz, Out Her Space retains a cohesiveness despite the illusion usually suggested of Blau as having little.

In remarkable contrast to Introducing..., Blau’s distinctive rich warble and Nashville warmness take a backseat in favour of campfire incantations. Opening tracks "Slow Children" and "Poor the War Away" invoke a playful afro-pop sensibility in contrast to their sombre reflective themes. In regards to the latter, though written as criticism of the Bush years, Blau rightly insists that “it’s more relevant than ever”. Though there is an overarching humanitarian concern, this intersects with the highly personal sphere of the home with "Where You Goin’ Papa" where private concern is mapped onto a greater public uncertainty.

Uncertainty is a prevailing theme tying together the strands of Blau’s multifaceted songwriting. Perhaps the most encompassing track, "Blue as My Name", presents the dissonance between the simultaneous awe and confusion that confronts us in a world irreverently advancing without a care for those caught up in it. Though amalgamating the soulful pop hooks of "Beckon" with the meandering jazz led "I Got the Sounds Like You Got the Blues" into one oeuvre may appear structurally clunky, this merely enforces the plurality of the work as a whole.

Out Her Space is Introducing’s twisted older sibling. Though some may be perturbed by the departure from Introducing’s Nashville direction, those open to Blau’s versatility as a composer and songwriter will find much aural stimulation in the united multiplicity of his works.