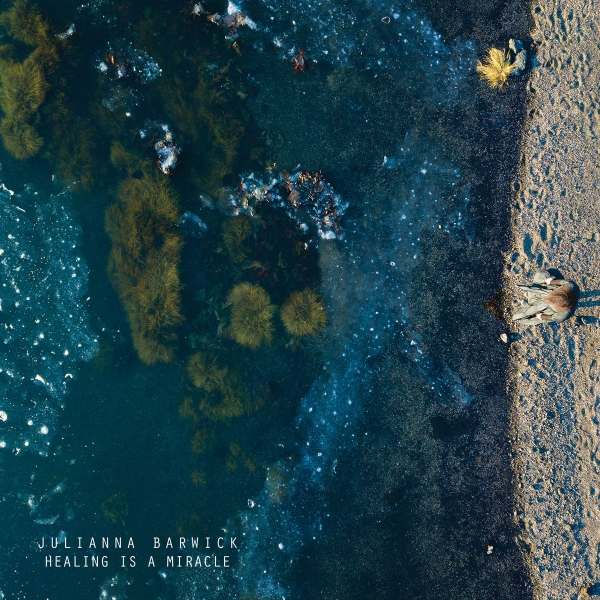 ​​Healing Is A Miracle opens like a sharp intake of breath

Julianna Barwick’s layered vocals recalling the sound of crashing waves being sucked back into the deep blue by the ocean’s current. “Inspirit” perfectly sets the stage for the beautiful exercise in subtlety that is Barwick’s fourth full length album.

Recorded in Los Angeles following Barwick’s departure from New York, Healing Is A Miracle is a joyful experiment in following your gut and embracing the physical feeling of music – its sternum vibrations, its floor shaking bass and frisson stirring strings. Even though Barwick found herself far from a place she’d called home for 16 years, a sense of community is built through collaborations with fellow LA residents Mary Lattimore and Kendrick Lamar/Chance The Rapper producer Nosaj Thing, with Jónsi representing Barwick’s long-time affinity for and connection to Iceland.

The whole album is like a dream long forgotten, a sense of nostalgia and saudade sitting at its core but it is equally wrapped in joy: The sheer delight of Barwick’s vocals - shifting from gossamer to choral to breathy and back - Lattimore’s harp (as featured in “Oh Memory”), Jónsi’s dulcet tones on the almost cacophonous, playful “In Light” and the bolder, thunderous rhythms of “Nod” ft. Nosaj Thing all bring a certain ebullience to proceedings.

Barwick’s vocals have always taken centre stage but they provide a greater unity on Healing Is A Miracle than previous releases, where other elements are at play but mostly in supporting roles – with perhaps the exception of the title track where strings dominate, and “Flowers” whose synths flutter in a demanding and impatient way, providing the song with its sense of urgency and drama.

“Safe”, arriving midway through the record, finds Barwick’s voice layered to perfection - a lower choral call stirs below a soothing murmur that gathers strength against the higher melody and broods and swoops and calms. “Safe” is as close to a rallying cry as Barwick gets. It screams home, freedom, safety, warmth, beauty - as they all do.

Healing Is A Miracle is a magical album whose depths reveal themselves slowly even if the record itself (at only 34 minutes) disappears in the blink of an eye. If you’ve spent time with Will, Nepenthe or debut album The Magic Place then you’ll more or less know what to expect given time to explore its swift current.